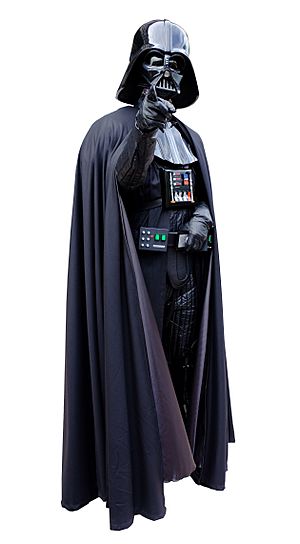 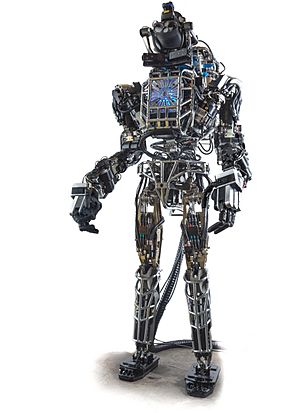 Front view of the humanoid robot Atlas, created by DARPA and Boston Dynamics

A cyborg (short for "cybernetic organism") is a being with both organic and biomechatronic body parts. The term was coined in 1960 by Manfred Clynes and Nathan S. Kline.

The term cyborg is not the same thing as bionic, biorobot or android; it applies to an organism that has restored function or enhanced abilities due to the integration of some artificial component or technology that relies on some sort of feedback. While cyborgs are commonly thought of as mammals, including humans, they might also conceivably be any kind of organism.

In popular culture, some cyborgs may be represented as visibly mechanical (e.g., Cyborg from DC Comics, the Cybermen in the Doctor Who franchise or The Borg from Star Trek or Darth Vader from Star Wars) or as almost indistinguishable from humans (e.g., the "Human" Cylons from the re-imagining of Battlestar Galactica, etc.).

Cyborgs in fiction often play up a human contempt for over-dependence on technology, particularly when used for war, and when used in ways that seem to threaten free will. Cyborgs are also often portrayed with physical or mental abilities far exceeding a human counterpart (military forms may have inbuilt weapons, among other things).

According to some definitions of the term, the physical attachments humanity has with even the most basic technologies have already made them cyborgs. In a typical example, a human with an artificial cardiac pacemaker or implantable cardioverter-defibrillator would be considered a cyborg, since these devices measure voltage potentials in the body, perform signal processing, and can deliver electrical stimuli, using this synthetic feedback mechanism to keep that person alive.

The concept of a man-machine mixture was widespread in science fiction before World War II.

The term was coined by Manfred E. Clynes and Nathan S. Kline in 1960 to refer to their conception of an enhanced human being who could survive in extraterrestrial environments:

Their concept was the outcome of thinking about the need for an intimate relationship between human and machine as the new frontier of space exploration was beginning to open up.

Cyborgs tissues structured with carbon nanotubes and plant or fungal cells have been used in artificial tissue engineering to produce new materials for mechanical and electrical uses. 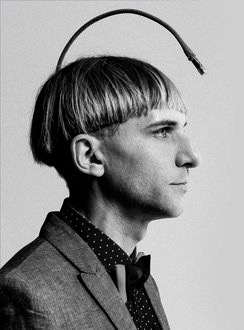 Neil Harbisson, first person to be officially recognized as a cyborg by a government and co-founder of the Cyborg Foundation (2004)

In current prosthetic applications, the C-Leg system developed by Otto Bock HealthCare is used to replace a human leg that has been amputated because of injury or illness. The use of sensors in the artificial C-Leg aids in walking significantly by attempting to replicate the user's natural gait, as it would be prior to amputation. Prostheses like the C-Leg and the more advanced iLimb are considered by some to be the first real steps towards the next generation of real-world cyborg applications. Additionally cochlear implants and magnetic implants which provide people with a sense that they would not otherwise have had can additionally be thought of as creating cyborgs.

Since 2004, British artist Neil Harbisson, has had a cyborg antenna implanted in his head that allows him to extend his perception of colors beyond the human visual spectrum through vibrations in his skull. His antenna was included within his 2004 passport photograph which has been claimed to confirm his cyborg status. In 2012 at TEDGlobal, Harbisson explained that he started to feel cyborg when he noticed that the software and his brain had united and given him an extra sense.

Furthermore many cyborgs with multifunctional microchips injected into their hand are known to exist. With the chips they are able swipe cards, open or unlock doors, operate devices such as printers or, with some using a cryptocurrency, buy products, such as drinks, with a wave of the hand. 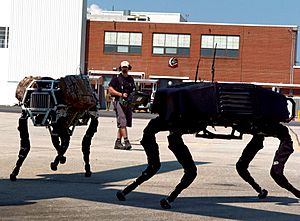 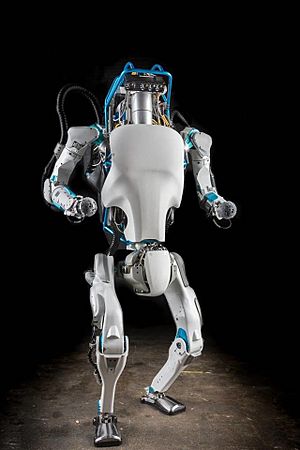 Military organizations' research has recently focused on the utilization of cyborg animals for the purposes of a supposed tactical advantage. DARPA has announced its interest in developing "cyborg insects" to transmit data from sensors implanted into the insect during the pupal stage. The insect's motion would be controlled from a Micro-Electro-Mechanical System (MEMS) and could conceivably survey an environment or detect explosives and gas. Similarly, DARPA is developing a neural implant to remotely control the movement of sharks. The shark's unique senses would then be exploited to provide data feedback in relation to enemy ship movement or underwater explosives.

The use of neural implants has recently been attempted, with success, on cockroaches. Surgically applied electrodes were put on the insect, which were remotely controlled by a human. The results, although sometimes different, basically showed that the cockroach could be controlled by the impulses it received through the electrodes. DARPA is now funding this research because of its obvious beneficial applications to the military and other areas

Eventually researchers plan to develop HI-MEMS for dragonflies, bees, rats and pigeons. For the HI-MEMS cybernetic bug to be considered a success, it must fly 100 metres (330 ft) from a starting point, guided via computer into a controlled landing within 5 metres (16 ft) of a specific end point. Once landed, the cybernetic bug must remain in place.

All content from Kiddle encyclopedia articles (including the article images and facts) can be freely used under Attribution-ShareAlike license, unless stated otherwise. Cite this article:
Cyborg Facts for Kids. Kiddle Encyclopedia.