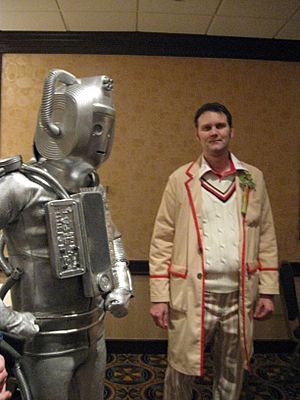 A Cyberman and the Fifth Doctor 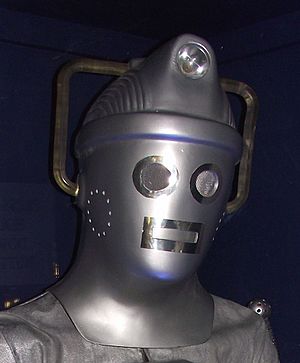 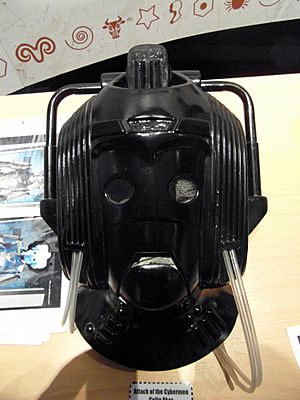 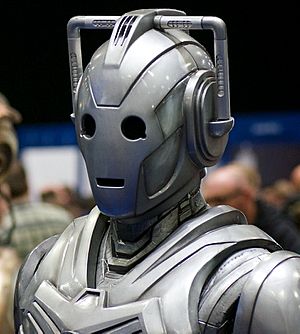 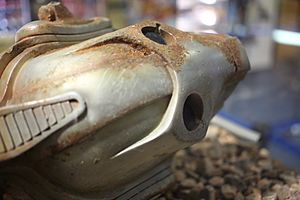 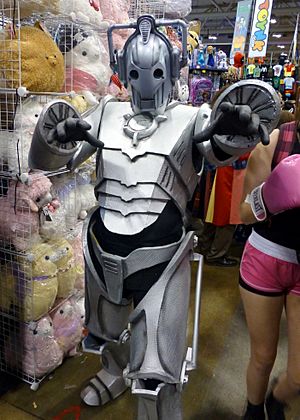 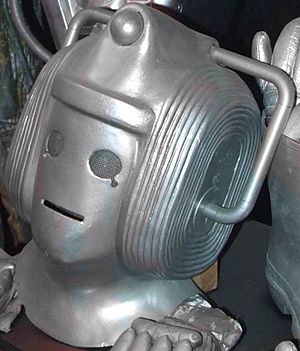 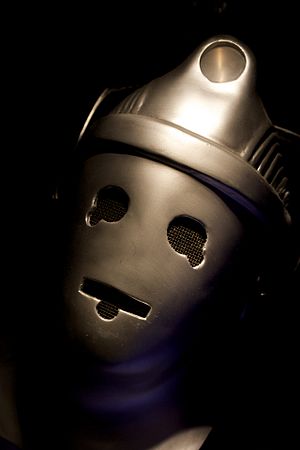 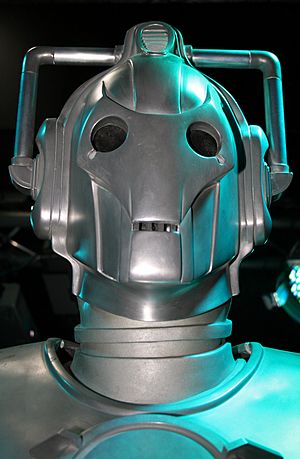 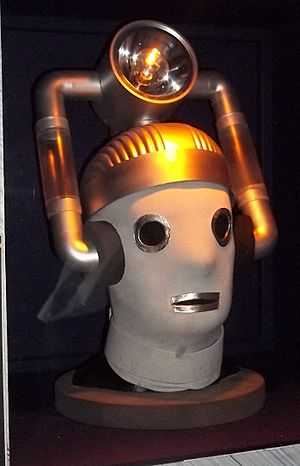 Cyberman Head from The Tenth Planet 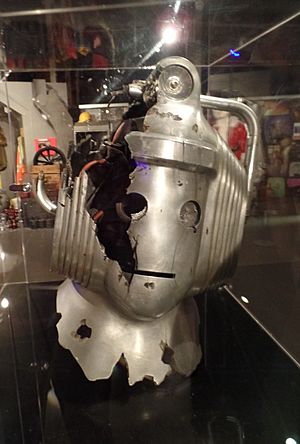 The Cybermen are a fictional race of cyborgs in the British television series Doctor Who. They are one of the greatest and longest enemies of the Doctor. Cybermen were originally humanoids from the Earth's twin planet Mondas. The people of Mondas began to put more and more artificial metal parts into their bodies to keep themselves alive, making them cyborgs. This led to the race starting to think logically and calculating, showing no emotions. The Cybermen also turning other people into cyborgs.

They were created by Dr. Kit Pedler (the unofficial scientific advisor to the programme) and Gerry Davis in 1966, first appearing in the serial, The Tenth Planet, which was the last to feature William Hartnell as the First Doctor. They have since been in the show a lot.

A parallel universe version of the Cybermen appeared in the 2006 series in the two-part story, Rise of the Cybermen and The Age of Steel. They also appear in Army Of Ghosts and Doomsday. They also appeared in the spin-off series Torchwood in the episode "Cyberwoman". They would later return to the new series in the 2008 Christmas Special "The Next Doctor", introducing two new types of cyberman; the Cyber-Shades and the Cyber-King.

While the Doctor's other old enemies the Daleks did not change during the original series's twenty-six season run, the Cybermen were seen to change with almost every appearance. The Cybermen are humanoid, but have replaced their limbs and other body parts with non-living parts to the point where they don't have many flesh parts. In their first appearance in the series, the only portions of their bodies that still seemed human were their hands, but by their next appearance in The Moonbase (1967), their bodies were entirely covered up in their metal suits, with their hands replaced by two finger claws, but changed back to regular five finger hands in The Invasion (1968). As there are not many of them, the Cybermen often convert humans to cybermen.

Although the Cybermen often claim that they have done away with human emotion, they have exhibited emotions ranging from anger to smug satisfaction in their confrontations with the Doctor (although this is only clearly present during their appearances in the 1980s). Some Cybermen in the early stories were even given individual names such as "Krang". Some parallel Earth Cybermen did retain some memories of their pre-conversion lives, although their emotional response varied

This motive behind the removal of emotions is made more clear in "The Age of Steel" where it is done by putting in things that keep them from feeling emotions. In that episode, the deactivation of their emotional inhibitors drives the converted Cybermen insane when they realise what they have become, killing them. This motive may also be applicable to Mondas Cybermen, given their forcible conversion of other lifeforms to Cybermen to maintain their numbers, despite the fact the Mondasians appear to have originally willingly converted themselves as a survival mechanism.

Cybermen have a number of weaknesses over the years. Their biggest weakness is gold. It was not mentioned that they did not like gold until their attempt to destroy the planetoid Voga (the so-called "Planet of Gold") in Revenge of the Cybermen (1975). Initially, it was explained that, because it is very hard to grind up, gold chokes their respiratory systems. For example, the However, in later serials, gold appeared to affect them rather like silver affects werewolves, with gold coins or bullets with gold on the edge fired at them having the same effect. The revived series' Cybermen have no weakness to gold.

Nearly all the cyberman costumes were silver in colour and included items and material such as cloth, rubber diving suits, PVC, chest units, tubing, practice golf balls, cricketers' gloves, and silver-painted Doc Martens boots. A BBC Cyberman costume from the black & white era of TV has recently been discovered.

The 1980s design used converted flight suits painted silver. Unlike the Doctor's other enemies, the Cybermen have changed a lot in appearance over the years, looking more and more modern, although retaining certain commonalities of design, the most iconic being the "handle bars" attached to Cybermen heads, that were supposed to aid with their hearing, their round eyeholes and their chest units. Completely black-coloured Cybermen were seen briefly in Attack of the Cybermen.

The Cybermen returned in episodes 5 and 6 of the 2006 season of the new series, in a two-part story set on an alternate Earth. The new Cybermen were designed by production designer Edward Thomas's team and Neill Gorton at Millennium FX. The new Cyberman design is tall, in a style reminiscent of Art Deco, with their Cybus Corporation logo on their chests and made to look like burnished steel instead of silver. The other big changes in the Cyberman design is that the Cyber-Controller had glowing eyes, a transparent forehead revealing the brain, and sockets on its chest-plate providing connectors to other systems.

Early Cybermen had an unsettling, sing-song voice, created by changing their voices slightly on syllables which a voice does not normally change. Their mouths opened fully and did not move when they were talking, then their mouths would shut as soon as they stopped talking. However they stopped doing this after their first few appearances.

The voices for the 2006 return of the Cybermen were provided by Nicholas Briggs (who performed the voices for the Cybermen in Big Finish audio stories as well as the Daleks in both the new series and the audio stories). Shown in the season 2 DVD special feature "Confidential Cut Downs," the voice was created by processing Brigg's voice through a voice modulator. The new Cybermen have a blue light in their "mouths" which blinks in synchronisation with their speech.

The Cybermen also use smaller, cybernetic creatures called "cybermats" to attack. In their first appearance in The Tomb of the Cybermen, they resembled big metal fish and had segmented bodies with hair sensor probes along the base of their heads, which were topped with eyes. The Second Doctor described them as a "form of metallic life,".

The second model of cybermat seen in The Wheel in Space was used for sabotage, able to listen to human brainwaves. They were carried to the "Wheel" in small sacs that sank through the walls of the space station, causing drops in air pressure.

The third model, seen in Revenge of the Cybermen, was a much larger, snake-like cybermat that could be remotely controlled and could inject poison into its victims.

Cybermats appear in Blood of the Cybermen. They look like flat snakes, and can turn living things into Cyber-Slaves with their poison. They are remote controlled, and are of the new, 3rd race of cybermen. They are Cyber Cats and Dogs.

On the BBC website, the Cybus Cybermen appear in two online games, Cyber Assault and Save Paris, both depicting the war between the Cybermen and Preachers on the parallel Earth. The Adventure Games has an episode, Blood of the Cybermen, which feature a 3rd, new race of Cybermen.

All content from Kiddle encyclopedia articles (including the article images and facts) can be freely used under Attribution-ShareAlike license, unless stated otherwise. Cite this article:
Cyberman Facts for Kids. Kiddle Encyclopedia.