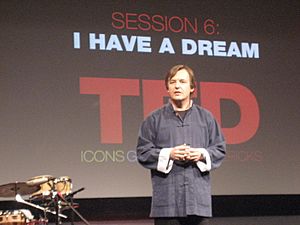 TED stands for "Technology, Entertainment, Design". It is a conference that began in 1984 and meets every year at Long Beach. People give talks about many things, for example, science, art, and business. Bill Clinton, Al Gore, and Bill Gates have all talked at TED. The talks have been online for people to watch for free since 2006.

All content from Kiddle encyclopedia articles (including the article images and facts) can be freely used under Attribution-ShareAlike license, unless stated otherwise. Cite this article:
TED (conference) Facts for Kids. Kiddle Encyclopedia.