William Henry Gates III (born October 28, 1955), commonly known as Bill Gates, is the co-founder and chairman of Microsoft. He is one of the richest people in the world.

He was a freshman at Harvard University in 1973. He left Harvard to make software. Bill Gates saw an opportunity to transform the personal computer, which used to be a hard-to-use and expensive device. He saw that computers could be made less expensive and more easy to use. Gates started Microsoft in 1975 with Paul Allen.

In 2006, Gates announced he was going to quit his job at Microsoft. This was so he could do more charity work with his wife, Melinda. Their charity is called the Bill and Melinda Gates Foundation. Gates' philanthropy projects have included vaccination of children in sub-Saharan Africa, scholarship programs in the United States, and leadership to help organize other billionaires to redistribute their wealth. He likes to give money and support to human rights, education and technological innovation.

Gates stepped down from his CEO position in Microsoft in 1998 and Steve Ballmer did the job instead. On June 16, 2007, Microsoft said that Gates, the chairman of Microsoft, will come in on a day-to-day schedule to continue working with his charity organization full-time for the years to come. On 2014, Satya Nadella became the new CEO of Microsoft and Bill Gates came back as the Chief Technology Adviser.

William Henry Gates III was born on October 28, 1955 at Swedish Medical Center in Seattle, Washington, U.S. He has British and German ancestry. His father William H. Gates, Sr. was a lawyer. His mother Mary Maxwell Gates served on the board of directors for First Interstate BancSystem and the United Way. His parents wanted him to be a lawyer. At the age of 13, Bill went to Lakeside High School. 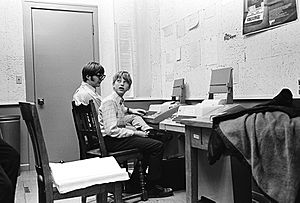 Gates (right) with Paul Allen at Lakeside School in 1970

At 13, he enrolled in the private Lakeside prep school, where he wrote his first software program. When he was in the eighth grade, the Mothers' Club at the school used proceeds from Lakeside School's rummage sale to buy a Teletype Model 33 ASR terminal and a block of computer time on a General Electric (GE) computer for the students. Gates took an interest in programming the GE system in BASIC, and he was excused from math classes to pursue his interest. He wrote his first computer program on this machine, an implementation of tic-tac-toe that allowed users to play games against the computer. Gates was fascinated by the machine and how it would always execute software code perfectly. After the Mothers Club donation was exhausted, Gates and other students sought time on systems including DEC PDP minicomputers. One of these systems was a PDP-10 belonging to Computer Center Corporation (CCC) which banned for the summer Gates, Paul Allen, Ric Weiland, and Gates' best friend and first business partner Kent Evans, after it caught them exploiting bugs in the operating system to obtain free computer time.

The four students formed the Lakeside Programmers Club to make money. At the end of the ban, they offered to find bugs in CCC's software in exchange for extra computer time. Rather than use the system remotely via Teletype, Gates went to CCC's offices and studied source code for various programs that ran on the system, including Fortran, Lisp, and machine language. The arrangement with CCC continued until 1970 when the company went out of business.

The following year, a Lakeside teacher enlisted Gates and Evans to automate the school's class-scheduling system, providing them computer time and royalties in return. The duo worked diligently in order to have the program ready for their senior year. Towards the end of their junior year, Evans was killed in a mountain climbing accident, which Gates has described as one of the saddest days of his life. Gates then turned to Allen who helped him finish the system for Lakeside.

At 17, Gates formed a venture with Allen called Traf-O-Data to make traffic counters based on the Intel 8008 processor.

In 1972, he served as a congressional page in the House of Representatives. He was a National Merit Scholar when he graduated from Lakeside School in 1973. He scored 1590 out of 1600 on the Scholastic Aptitude Tests (SAT) and enrolled at Harvard College in the autumn of 1973. He chose a pre-law major but took mathematics and graduate level computer science courses.

Gates remained in contact with Paul Allen and joined him at Honeywell during the summer of 1974. In 1975, the MITS Altair 8800 was released based on the Intel 8080 CPU, and Gates and Allen saw the opportunity to start their own computer software company. Gates dropped out of Harvard that same year.

He was a freshman at Harvard University in 1973. He left Harvard to make software. Bill Gates saw an opportunity to transform the personal computer, which was expensive and difficult to use. He decided that computers could be made less expensive and easier to use. 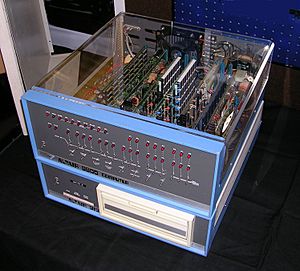 MITS Altair 8800 Computer with 8-inch (200 mm) floppy disk system, of which the first programming language for the machine was Microsoft's founding product, the Altair BASIC

Gates read the January 1975 issue of Popular Electronics which demonstrated the Altair 8800, and he contacted Micro Instrumentation and Telemetry Systems (MITS) to inform them that he and others were working on a BASIC interpreter for the platform. Over the course of a few weeks they developed an Altair emulator that ran on a minicomputer, and then the BASIC interpreter. The demonstration was a success and resulted in a deal with MITS to distribute the interpreter as Altair BASIC.

MITS hired Allen, and Gates took a leave of absence from Harvard to work with him at MITS in November 1975. Allen named their partnership "Micro-Soft", a combination of "microcomputer" and "software", and their first office was in Albuquerque.

The first employee Gates and Allen hired was their high school collaborator Ric Weiland. They dropped the hyphen within a year and officially registered the trade name "Microsoft" with the Secretary of the State of New Mexico on November 26, 1976. Gates never returned to Harvard to complete his studies.

Microsoft became independent of MITS in late 1976, and it continued to develop programming language software for various systems. The company moved from Albuquerque to Bellevue, Washington on January 1, 1979.

Gates said that he personally reviewed and often rewrote every line of code that the company produced in its first five years. As the company grew he transitioned to a manager role, then an executive.

IBM, the leading supplier of computer equipment to commercial enterprises at the time, approached Microsoft in July 1980 concerning software for its upcoming personal computer, the IBM PC. A few weeks later, Gates and Allen proposed using 86-DOS, an operating system similar to CP/M, that Tim Paterson of Seattle Computer Products (SCP) had made for hardware similar to the PC. Microsoft made a deal with SCP to be the exclusive licensing agent of 86-DOS, and later the full owner. Microsoft employed Paterson to adapt the operating system for the PC and delivered it to IBM as PC DOS for a one-time fee of $50,000.

The prestige brought to Microsoft by IBM's adoption of their operating system was the origin of Microsoft's transformation from a small business to the World's leading software company. They made the IBM-compatible PC, running DOS, a de facto standard. The sales of MS-DOS (the version of DOS sold to customers other than IBM) made Microsoft a major player in the industry.

Gates oversaw Microsoft's company restructuring on June 25, 1981, which re-incorporated the company in Washington state and made Gates the president and chairman of the board, with Paul Allen as vice president and vice chairman.

In early 1983, Allen left the company after receiving a Hodgkin lymphoma diagnosis, effectively ending the formal business partnership between Gates and Allen, which had been strained months prior due to a contentious dispute over Microsoft equity. Later in the decade, Gates repaired his relationship with Allen and together the two donated millions to their childhood school Lakeside. They remained friends until Allen's death in October 2018.

Microsoft launched its first retail version of Microsoft Windows on November 20, 1985. In August of the following year, the company struck a deal with IBM to develop a separate operating system called OS/2. Although the two companies successfully developed the first version of the new system, the partnership deteriorated due to mounting creative differences. 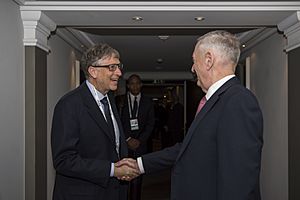 In 2006, Gates announced he was going to quit his job at Microsoft. This was so he could do more charity work with his wife, Melinda. Their charity is called the Bill and Melinda Gates Foundation. Gates' philanthropy projects have included vaccination of children in sub-Saharan Africa, scholarship programs in the United States, and a mission to help organize other billionaires to redistribute their wealth. He likes to give money and support to human rights, education and technological innovation.

Gates stepped down from his CEO position in Microsoft in 1998 and Steve Ballmer did the job instead. On June 16, 2007, Microsoft said that Gates, the chairman of Microsoft, will come in on a day-to-day schedule to continue working with his charity organization full-time for the years to come. On 2014, Satya Nadella became the new CEO of Microsoft and Bill Gates came back as the Chief Technology Adviser.

He was awarded an honorary knighthood by Queen Elizabeth II in 2005 for his services to philanthropy and charity. As an American citizen, he cannot be called "Sir Bill Gates", but can use the letters "KBE" after his name.

Since 1987, he has been included in the Forbes list of the world's wealthiest people. From 1995 to 2017, he held the Forbes title of the richest person in the world all but four of those years. 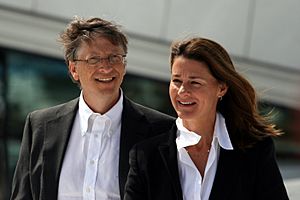 Bill and Melinda Gates in June 2009

The Bill and Melinda Gates Foundation supports the use of genetically modified organisms in agricultural development. Specifically, the foundation is supporting the International Rice Research Institute in developing Golden Rice, a genetically modified rice variant used to combat Vitamin A deficiency.

Melinda Gates suggested that people should emulate the philanthropic efforts of the Salwen family, which had sold its home and given away half of its value, as detailed in The Power of Half. Gates and his wife invited Joan Salwen to Seattle to speak about what the family had done, and on December 9, 2010, Gates, investor Warren Buffett, and Facebook founder and CEO Mark Zuckerberg signed a commitment they called the "Gates-Buffet Giving Pledge." The pledge is a commitment by all three to donate at least half of their wealth over the course of time to charity.

Bill and Melinda Gates have said that they intend to leave their three children $10 million each as their inheritance. With only $30 million kept in the family, they appear to be on a course to give away about 99.96 percent of their wealth. 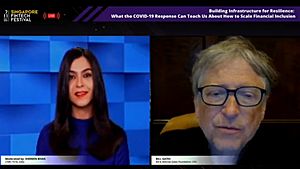 Gates in a fireside chat moderated by Shereen Bhan virtually at the Singapore FinTech Festival 2020.

All content from Kiddle encyclopedia articles (including the article images and facts) can be freely used under Attribution-ShareAlike license, unless stated otherwise. Cite this article:
Bill Gates Facts for Kids. Kiddle Encyclopedia.