The Great Gatsby facts for kids

The Great Gatsby is a novel by F. Scott Fitzgerald. It was first sold in 1925. The novel takes place in New York City and Long Island in New York.

The Great Gatsby is one of the most popular books in the United States. The book was number two on the Modern Library Association's list of "100 Best Novels of the 20th Century." Time Magazine put the book in its TIME 100 Best English-language Novels from 1923 to 2005. A 1989 study found that 54% of high schools surveyed taught The Great Gatsby in their English classes.

The story is told by Nick Carraway, a man who moves to Long Island, New York, from the Midwest. Nick is not rich, but he lives in a rich area that has two towns called East Egg and West Egg. The "old rich" live in East Egg while the "new rich" live in West Egg. Nick lives in a small house in West Egg. Nick's next-door neighbor is Jay Gatsby. Jay is in love with Nick's cousin Daisy. However, Daisy is married to a man named Tom. The novel is about Jay and his hope that he can steal Daisy from Tom.

The events of the novel happen in the summer of 1922. Nick Carraway, a man who grew up in the American Midwest, is the narrator. Nick is a World War I veteran and a Yale University graduate who wants a more exciting life. He moves to New York, to be a bonds salesman. There, he rents a house in the small human community of West Egg. The person living next to him is Jay Gatsby, a mysterious man who also has a lot of money. Jay Gatsby also hosts many expensive parties frequently. Strangely, he never participates in his own parties; because of this, many rumors are formed as to Gatsby's true identity and background. Nick drives out to visit his cousin Daisy in East Egg. There, he meets her husband, Tom Buchanan. He is also introduced to her friend, Jordan Baker. Nick learns from her that Tom has been having an affair with Myrtle Wilson. Nick decides to hold his judgment.

Later in the summer, Nick is invited to one of Gatsby's parties. There, he meets Gatsby himself, a young and charming man. Nick learns that Gatsby was once in a romantic relationship with Daisy, many years ago. Gatsby is still in love with her, and spends many nights looking at the green light from Daisy's dock across his mansion. He is hoping that he could impress Daisy with his rich lifestyle and wild parties. Gatsby grew up very poor and with little opportunity to move up in the world, and this motivated him to pursue wealth to reinvent himself and become worthy of being with Daisy. Gatsby asks Nick to arrange for Daisy and him to meet. Nick invites them both over for tea, and they begin to fall in love again. They then start an affair with one another. 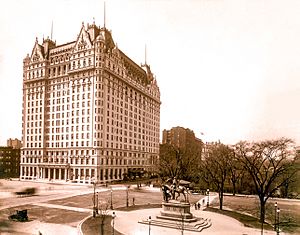 The Plaza Hotel in the early-1920s

After a short time, Tom notices that Daisy and Gatsby are in love. The group meets at a hotel, where Daisy is forced to choose between Gatsby and Tom. She chooses Tom, and the group begins to drive home. Along the way, Daisy, driving Gatsby's car, accidentally hits and kills Myrtle. Gatsby tells Nick that he will take the blame in order to save Daisy. Later, he is then shot dead by Myrtle's husband, George, believing that Gatsby was the one responsible. George then kills himself.

Nick holds a funeral for Gatsby, but very few people show up despite Gatsby having been famous. Angry and sad about everything that has happened, Nick decides to leave New York to move back to the Midwest.

All content from Kiddle encyclopedia articles (including the article images and facts) can be freely used under Attribution-ShareAlike license, unless stated otherwise. Cite this article:
The Great Gatsby Facts for Kids. Kiddle Encyclopedia.