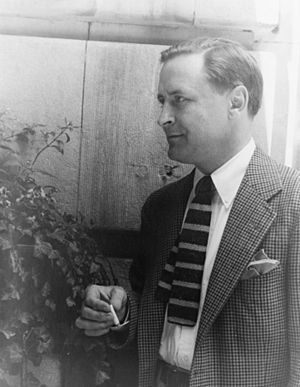 Francis Scott Key Fitzgerald (September 24, 1896 - December 21, 1940) was an Irish American writer. He is remembered mostly for his novel The Great Gatsby, and for being one of the main members of the Lost Generation.

Fitzgerald was born in Saint Paul, Minnesota. He briefly went to the Nardin Academy– a private Roman Catholic school in Western New York. When his father lost his job, the Fitzgerald family returned to Minnesota. F. Scott Fitzgerald then went to the St. Paul Academy, but was thrown out of the school when he was aged 16 for not working hard enough. Fitzgerald went to another school in New Jersey and eventually went to Princeton University in 1913. While he was at Princeton, Fitzgerald wrote for a musical-comedy club at the University which led to him sending a novel off to a book publishing company, Charles Scribner’s Sons. The editor liked Fitzgerald’s writing, but did not publish the book. Fitzgerald left Princeton University to serve in the United States Navy in World War One, but the war ended shortly after he signed up.

Fitzgerald got engaged to Zelda Sayre in 1919. He moved into an apartment on Lexington Avenue in New York where he wrote short stories and worked in advertising. Zelda did not think that Fitzgerald’s job was good enough and she broke off their engagement. Fitzgerald went back to his parent’s home in St. Paul and worked on his first novel This Side of Paradise. This Side of Paradise was finally accepted by Charles Scriber’s Sons in late 1919 and Zelda and Fitzgerald got engaged again. This Side of Paradise was published in 1920 and was very popular. Scott and Zelda got married in St. Patrick’s Cathedral in New York. On October 26, 1921, their daughter Frances Scott Fitzgerald was born.

Fitzgerald’s most famous book, The Great Gatsby, was first sold in 1925. Fitzgerald travelled a lot at this time – mainly to France, where he met a number of other Americans who had left the United States. It was around this time that Fitzgerald first met Ernest Hemingway. They became good friends, but Hemingway did not like Fitzgerald’s wife, Zelda. Hemingway said that Zelda was insane, made Fitzgerald drink alcohol and that she did not allow him to do his best work. It is generally accepted, however, that Zelda had a big influence on Fitzgerald’s writing.

Fitzgerald’s other novels did not sell as well as his first novel while he was alive. He and Zelda spent a lot of money on parties and Fitzgerald had to try and make money by writing short stories. In the late 1920s, Fitzgerald started working on a fourth novel, but problems arose when Zelda’s mental health got worse. The fourth novel, Tender is the Night, was not published until 1934. Some people say that the characters in the novel are very similar to Fitzgerald and Zelda themselves. Tender is the Night did not sell as well as This Side of Paradise in Fitzgerald’s lifetime, and a number of critics said it was poor. The book is now considered to be one of Fitzgerald’s better works, however.

Zelda’s mental health did not improve and she went to live in a mental hospital while her husband worked on more short stories and his fifth novel.

Fitzgerald’s health got worse; possibly due to the fact that he drank a lot of alcohol during his life. On December 21st 1940, he had a heart attack and died. The last words of The Great Gatsby are written on Fitzgerald’s gravestone. His fifth and last novel, The Love of the Last Tycoon, was released after he died.

All content from Kiddle encyclopedia articles (including the article images and facts) can be freely used under Attribution-ShareAlike license, unless stated otherwise. Cite this article:
F. Scott Fitzgerald Facts for Kids. Kiddle Encyclopedia.