Joseph Conrad (born Józef Teodor Konrad Korzeniowski; 3 December 1857 – 3 August 1924) was a Polish-British writer regarded as one of the greatest novelists to write in the English language, though he did not speak English fluently until his twenties. Conrad wrote stories and novels, many with a nautical setting, that represented the trials of the human spirit in the centre of what he saw as an unexpressive, mysterious universe.

Conrad is considered an early modernist, though his works contain elements of 19th-century realism. His narrative style and anti-heroic characters have influenced numerous authors, and many films have been adapted from, or inspired by, his works. Numerous writers and critics have commented that Conrad's fictional works, written largely in the first two decades of the 20th century, seem to have predicted later world events.

Writing near the peak of the British Empire, Conrad used, among other things, his native Poland's national experiences and on his own experiences in the French and British merchant navies, to create short stories and novels that reflect aspects of a European-dominated world—including imperialism and colonialism—and that deeply explore the human psyche. 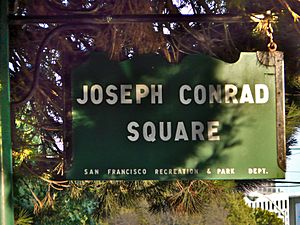 An anchor-shaped monument to Conrad at Gdynia, on Poland's Baltic Seacoast, features a quotation from him in Polish: "Nic tak nie nęci, nie rozczarowuje i nie zniewala, jak życie na morzu" ("There is nothing more enticing, disenchanting, and enslaving than the life at sea".

In Circular Quay, Sydney, Australia, a plaque in a "writers walk" commemorates Conrad's visits to Australia between 1879 and 1892. The plaque notes that "Many of his works reflect his 'affection for that young continent.'"

In San Francisco in 1979, a small triangular square at Columbus Avenue and Beach Street, near Fisherman's Wharf, was dedicated as "Joseph Conrad Square" after Conrad. The square's dedication was timed to coincide with release of Francis Ford Coppola's Heart of Darkness-inspired film, Apocalypse Now.

In the latter part of World War II, the Royal Navy cruiser HMS Danae was rechristened ORP Conrad and served as part of the Polish Navy.

A plaque commemorating "Joseph Conrad–Korzeniowski" has been installed near Singapore's Fullerton Hotel.

In April 2013, a monument to Conrad was unveiled in the Russian town of Vologda, where he and his parents lived in exile in 1862–63. The monument was removed, with unclear explanation, in June 2016.

All content from Kiddle encyclopedia articles (including the article images and facts) can be freely used under Attribution-ShareAlike license, unless stated otherwise. Cite this article:
Joseph Conrad Facts for Kids. Kiddle Encyclopedia.