Kids Encyclopedia Facts
This page is about the region on Long Island. For the incorporated village within the region, see Great Neck (village), New York.

Great Neck is a region on Long Island, New York, that covers a peninsula on the North Shore of Long Island, which includes the villages of Great Neck, Great Neck Estates, Great Neck Plaza, and others, as well as an area south of the peninsula near Lake Success and the border territory of Queens. The incorporated village of Great Neck had a population of 9,989 at the 2010 census, while the larger Great Neck area comprises a residential community of some 40,000 people in nine villages and hamlets in the town of North Hempstead, of which Great Neck is the northwestern quadrant. Great Neck has five ZIP Codes (11020–11024), and one school district.

The hamlets are census-designated places that consolidate various unincorporated areas. They are statistical entities and are not recognized locally. However, there are locally recognized neighborhoods within the hamlet areas, such as: Harbor Hills, Saddle Rock Estates, University Gardens, and Manhasset. The Manhasset neighborhood (in ZIP Code 11030) is not considered part of Great Neck. The part of the Hamlet of Manhasset that is considered part of Great Neck includes the Great Neck Manor neighborhood. Great Neck Gardens is featured on many maps as a name of one such hamlet, even as the name is used rarely if ever by local residents.

The westernmost portion of the Hamlet of Manhasset lies between the villages of Thomaston and Lake Success and has Great Neck postal codes (1102x).

Before the Dutch and English settlers arrived on the peninsula of Great Neck in the 17th century, the Mattinecock Native Americans originally inhabited the shorelines of the peninsula. It was not until 1681 when the European settlers held the first town meeting. The Mattinecock or Metoac used Long Island Sound as a way to both fish and trade with others.

They referred to present-day Great Neck as Menhaden-Ock. It is speculated that they chose this name because of the large amount of fish in the area. With the arrival of the European settlers on the peninsula in the 1640s, Menhaden-Ock evolved into Madnan's Neck. By 1670, Madnan's Neck had further evolved into the current name Great Neck. Local legend has it that the name "Madnan's Neck" is named after Anne (or Nan) Hutchinson. It is said that Anne Hutchinson tried to take over what is considered present-day Kings Point upon her arrival to the peninsula. However, Anne Hutchinson could not actually procure a land grant or deed for the land that she desired. Her temper supposedly earned her the nickname Mad Nan.

On November 18, 1643, the Hempstead Plains, which included the peninsula of Great Neck, was sold to the Reverend Robert Fordham and John Carman. In the beginning, the Mattinecock Indians and the European settlers cooperated and coexisted very well together. The Mattinecock would teach the settlers their knowledge of the land in exchange for new technology from the settlers. The settlers even started using the Indian currency of wampum. However, this peaceful coexistence would not last forever, and the relationship between the Mattinecock and the settlers quickly began to deteriorate. Settlers often began complaining of unfriendly Mattinecock behavior, claiming that the natives would damage their homes and hurt their cattle. On November 18, 1659, the settlers passed a law that forced the natives to pay damages for white property that they had damaged. The problem between the settlers and the Mattinecock natives over land and property kept growing and finally came to a head in 1684. A commission of settlers had been elected and given the power to appease the Mattinecock and their leader Tackapousha. Tackapousha was eventually paid off, and received 120 pounds sterling for his land. Tackapousha eventually died, and his body still rests at the Lakeville AME Zion Church's cemetery on Community Drive, across the street from North Shore University Hospital. The Lakeville AME Zion Church is one of the oldest churches in New York State.

The very first European to look upon the Long Island peninsula of Great Neck was Captain Adrian Block of the Great Dutch West India Company in 1614, when his men were stranded on the southern tip of Manhattan Island, because their ship, the Tiger, sank shortly after its landing. The captain and his men then built a ship called the Onrust out of timber and salvaged parts from the Tiger. When the sailors set sail again, they sailed around Long Island, mapping it as they passed. Later, the Reverend Robert Fordham and John Carman first came to Great Neck from New Haven by use of Long Island Sound. During this trip, the deal with Chief Tackapousha was reached. One year later, on November 16 William Kieft granted a special land patent for the territory, and permission for the community's incorporation. William Kieft was the director general of New Netherland, and the patent that he granted gave the people of the peninsula the right to religious self-determination. The new community's political independence was so great that only town officials who were in any way elected by the Dutch government or its magistrates, first nominated by a town meeting.

The Dutch controlled Long Island from 1642 to 1664. Under Dutch rule, constables, local officers, nominated magistrates, and overseers were elected by town meetings and passed legislation. On December 21, 1656, Peter Stuyvesant, who was the director general of New Netherland after William Kieft, appointed the first two magistrates of Hempstead. These two men were John Seaman and Richard Guildersleeve. The local government of Madnan's Neck at the time was extremely active in passing new laws. A liquor tax was imposed, and half of that tax paid for the town's supply of ammunition, with the other half going to education. A religious code of ethics was also published by the local government, which included conduct on holidays for the entire town. There were also punishments for poor conduct, which included fines, corporal punishment, and banishment.

During the late 19th century, Great Neck was the rail head of the New York and Flushing Railroad, and began the process of converting from a farm village into a commuter town.

In more recent days, Great Neck—in particular the Village of Kings Point—provided a backdrop to F. Scott Fitzgerald's book The Great Gatsby. It was thinly disguised as "West Egg," in counterpoint to Manor Haven/Sands Point, which was the inspiration for the more posh "East Egg" (the next peninsula over on Long Island Sound), Great Neck symbolized the decadence of the Roaring Twenties as it extended out from New York City to then-remote suburbs. The Great Gatsby's themes and characters reflected the real-world transformation that Great Neck was experiencing at the time, as show-business personalities like Sid Caesar and the Marx Brothers bought homes in the hamlet and eventually established it as a haven for Jews, formerly of Brooklyn and the Bronx. 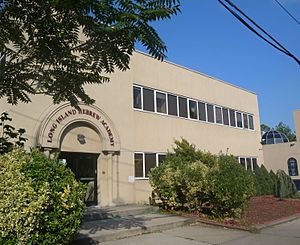 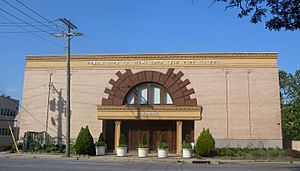 In 1943, the United States Merchant Marine Academy was founded at the former location of Walter P. Chrysler's palatial estate in Kings Point, as the only higher education institution in Great Neck. The end of World War II saw a tremendous migration of Ashkenazi Jews from the cramped quarters to the burgeoning suburb. They founded many synagogues and community groups and pushed for stringent educational policies in the town's public schools; it is portrayed in Jay Cantor's 2003 novel Great Neck, with recently installed residents of all stripes trying to secure the brightest futures for their children. During the construction of the current headquarters of the United Nations from 1947 through 1952, the United Nations was temporarily headquartered at the Sperry Corporation facility in the Great Neck community of Lake Success due to its proximity to Manhattan. Eleanor Roosevelt headed the UN Commission on Human Rights at this location.

During the 1960s, many residents frequented the local pool and ice-skating complex, Parkwood, after which its patronage dramatically increased following years of decline as homeowners built their own in-ground pools. After the September 11 attacks, the ice-skating rink was renamed in honor of Andrew Stergiopoulos, a local resident who was killed in the attack. It was extensively renovated in 2007 and 2008.

Things have changed in Great Neck since the Baby Boomer era. In the 1980s, an influx of affluent Iranian Jews who left their country following the 1979 Islamic Revolution settled in Great Neck. Though the majority of their children attended Great Neck schools, they did not integrate into the existing Ashkenazi synagogues, instead starting their own Iranian synagogues, where they could follow Mizrahi traditions and establishing its own grocery shops. Since the late 1990s, more observant, Orthodox Jews have moved to the area, similar to what happened in the Five Towns area on the South Shore of Long Island, although Reform and Conservative Jews appear to remain predominant in Great Neck. On Old Mill Road, three synagogues represent the three main branches of American Judaism: Temple Beth-El (Reform), Great Neck Synagogue (Orthodox), and Temple Israel of Great Neck (Conservative); Old Mill Road also has aco-naming, "Waxman Way", in memory of Temple Israel's rabbi, Mordechai Waxman, who led the congregation for 50 years. Beginning in the late 1990s and continuing till present day, a number of East Asians, predominantly Chinese and Korean, have been moving into the area for a better environment for their children as well as for the relatively high quality public school education. Great Neck's proximity to ethnic enclaves such as Flushing and Bayside makes it ideal for East Asians. 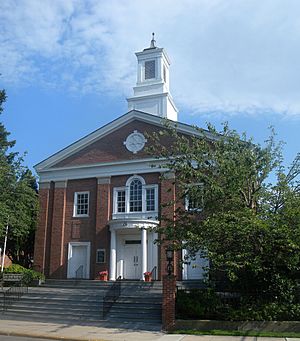 Great Neck is a 25- to 35-minute commute from Manhattan's Penn Station on the Port Washington Branch of the Long Island Rail Road via the Great Neck station, which is one of the most frequently served in the entire system; as a result, many LIRR trains terminate at the station to serve the large number of riders. Nassau Inter-County Express connects the villages to the train station and offers service to several destinations in Nassau County and Queens from the station, while the southern part of the Great Neck area can also directly access the Q46 New York City Bus on Union Turnpike at the border with Glen Oaks and the Q12 bus on Northern Boulevard at the border with Little Neck.

The Parkwood pool and skating rink complex, the Village Green and sections of Kings Point Park are managed by the Great Neck Park District. The park district serves all of Great Neck except the villages of Saddle Rock, Great Neck Estates, and Lake Success, and the neighborhoods (not hamlets) of Harbor Hills and University Gardens. The areas not served by the Great Neck Park District each have their own facilities for their residents, run by the villages or civic associations. Parkwood can also provide tennis lessons and skating lessons. During the summer it is a part of the Great Neck day camp program, where young campers use the swimming pool facilities.

Great Neck serves primarily as a "bedroom" community for New York City. As such, it contains few "touristy" attractions. Notable exceptions include:

All content from Kiddle encyclopedia articles (including the article images and facts) can be freely used under Attribution-ShareAlike license, unless stated otherwise. Cite this article:
Great Neck, New York Facts for Kids. Kiddle Encyclopedia.