The North Shore of Long Island is the area along the northern coast of New York's Long Island bordering Long Island Sound. Known for its extreme wealth and lavish estates, the North Shore exploded into affluence at the turn of the 20th century, earning it the nickname the Gold Coast. Historically, this term refers to the coastline communities in the towns of North Hempstead and Oyster Bay in Nassau County and the Town of Huntington in Suffolk County, although the town of Smithtown east of here is also known for its affluence. The easternmost Gold Coast mansion is the Geissler Estate, located just west of Indian Hills Country Club in Fort Salonga, within the Town of Huntington.

Being a remnant of glacial moraine, the North Shore is somewhat hilly, and its beaches are more rocky than those on the flat, sandy outwash plain of the South Shore along the Atlantic Ocean. Large boulders known as glacial erratics are scattered across the area.

The North Shore was first settled in the mid-1600s. Much of the area was initially controlled by the Dutch colony of New Netherland. Towns in the eastern part of the North Shore were settled by the English under the jurisdiction of the New Haven Colony and Connecticut Colony. This arrangement ended in 1664 with the English takeover of New Netherland, when all of Long Island was transferred into the new Province of New York.

In its early days the North Shore was largely agricultural. Whaling was also a component of the early economy, as is commemorated in Cold Spring Harbor's Whaling Museum & Education Center. 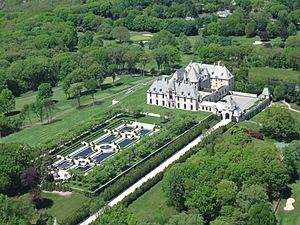 During the Second Industrial Revolution, great fortunes were made in steel, transportation and other industries. Beginning in the early 1890s, lavish private estates were erected on what became known as the "Gold Coast" of Long Island. In all, over 500 mansions were built during this spree, concentrated in 70 square miles (180 km2).

Among those were expansive faux chateaux and castles belonging to the Vanderbilts, Astors, Whitneys, Charles Pratt, J. P. Morgan, F. W. Woolworth, and others. Otto Kahn's Oheka Castle was reputed to be the second largest private home in the United States, second only to the Biltmore Estate in Asheville, North Carolina. Alternatively, some eschewed formal mansions and erected large shingle-style and clapboard "cottages", such as Theodore Roosevelt's Sagamore Hill. 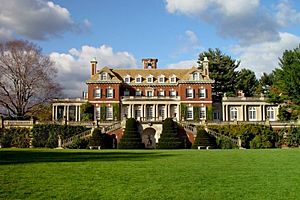 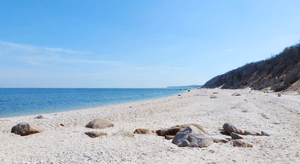 Bluffs along the North Shore

Delineated perceptually by the Queens-Nassau border, the North Shore is marked by a series of necks (peninsulas) and populated harbors. North Hempstead, Oyster Bay and Huntington Towns comprise the land ownership of this area, which is noted for its preservation of Gilded Age Estates. Beyond here, the North Shore becomes Towns of Smithtown and Brookhaven, where a similar trend of peninsulas and sheltered harbors are the sites of hamlets and towns such as Stony Brook, Port Jefferson, Wading River, etc..

Once the island splits into two forks at its east end, the North Shore's hills largely flatten out (and enter the Town of Riverhead) to an out-wash plain and becomes largely rural (and enters the Town of Southold), with an economic stronghold on agriculture, particularly in the shape of wineries and vineyards. This recent trend, beginning in the 1980s with the conversion of potato farms, has given the North Fork the distinction of being the most productive agricultural area in New York State. Despite this, North Fork, contrasts starkly with the more populated and more well-known South Fork's Hamptons. The North Fork terminates at Orient Point, where the Cross Sound Ferry Company has a terminal for ferries bound for New London, CT. and Block Island, RI.

Greenport, a village in Southold midway between Orient and Riverhead, is a major economic center for the North Fork and as such, is the eastern terminus of the Long Island Rail Road's Main Line. The North Fork is also geographically tied to a separate township, Shelter Island, an island in the Peconic Bay accessible via ferry that leaves from Greenport, adjacent to the railroad station. The island also has a ferry on its south side that connects with North Haven on the South Fork.

Some mansions burned down, others that were abandoned were vandalized or overtaken by vegetation. Many were torn down to make room for developments, as the Great Depression, poor financial decisions, increasing requirements for upkeep, and increasing income taxes depleted family fortunes. Some of the notable mansions that are now gone are included in the table below with some of their features.

All content from Kiddle encyclopedia articles (including the article images and facts) can be freely used under Attribution-ShareAlike license, unless stated otherwise. Cite this article:
North Shore (Long Island) Facts for Kids. Kiddle Encyclopedia.