Roslyn Harbor is a village in Nassau County, on the North Shore of Long Island, in New York, United States. It is considered part of the Greater Roslyn area, which is anchored by the Incorporated Village of Roslyn. The population was 1,051 at the 2010 census.

The Incorporated Village of Roslyn Harbor lies in both the Town of Oyster Bay and the Town of North Hempstead.

According to the United States Census Bureau, the village has a total area of 1.2 square miles (3.1 km2), all of it land.

There were 356 households, out of which 34.6% had children under the age of 18 living with them, 77.2% were married couples living together, 5.3% had a female householder with no husband present, and 15.4% were non-families. 12.6% of all households were made up of individuals, and 6.2% had someone living alone who was 65 years of age or older. The average household size was 2.87 and the average family size was 3.12.

Roslyn Harbor is served by both the Roslyn Union Free School District and the North Shore Central School District. Students who reside in Roslyn Harbor and attend public schools go to one of these districts depending on where they live in the village.

Northern Boulevard (NY 25A) forms much of the village's southern border.

Other major roads within Roslyn Harbor include Bryant Avenue and Glen Cove Road. 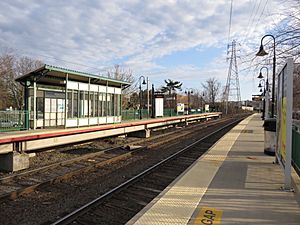 The Greenvale station on the Long Island Rail Road's Oyster Bay Branch, despite its name, is located primarily in Roslyn Harbor, adjacent to the Roslyn Harbor–Greenvale border.

Roslyn Harbor is served by the n20H, n21, and n27 bus routes, which are operated by Nassau Inter-County Express (NICE).

National Grid USA provides natural gas to homes and businesses that are hooked up to natural gas lines in Roslyn Harbor.

PSEG Long Island provides power to all homes and businesses within Roslyn Harbor.

Roslyn Harbor is not connected to any sanitary sewers, and as such, the entire village relies on cesspools and septic systems.

All content from Kiddle encyclopedia articles (including the article images and facts) can be freely used under Attribution-ShareAlike license, unless stated otherwise. Cite this article:
Roslyn Harbor, New York Facts for Kids. Kiddle Encyclopedia.