Roslyn Heights is a hamlet and census-designated place (CDP) in the Town of North Hempstead in Nassau County, on Long Island, in New York, United States. It is considered part of the Greater Roslyn area, which is anchored by the Incorporated Village of Roslyn. The population was 6,577 at the 2010 census.

According to the United States Census Bureau, the CDP has a total area of 1.5 square miles (3.9 km2), all land. 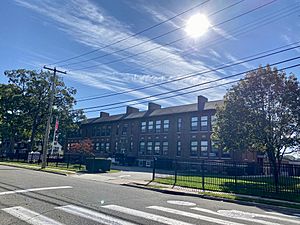 The Heights School, which is in the heart of Roslyn Heights, serves as one of the Roslyn Union Free School District's three elementary schools.

Roslyn Heights is served by the Oyster Bay Branch of the Long Island Rail Road. Two stations are located either within or on the border of Roslyn Heights: 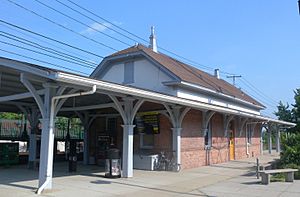 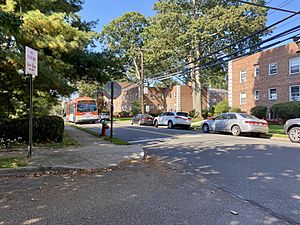 An n23 bus on Warner Avenue at the northern end of the hamlet.

National Grid USA provides natural gas to homes and businesses that are hooked up to natural gas lines in Roslyn Heights.

PSEG Long Island provides power to all homes and businesses within Roslyn Heights.

The remainder of Roslyn Heights relies on cesspools and septic systems.

All content from Kiddle encyclopedia articles (including the article images and facts) can be freely used under Attribution-ShareAlike license, unless stated otherwise. Cite this article:
Roslyn Heights, New York Facts for Kids. Kiddle Encyclopedia.