Glen Cove is a city in Nassau County, New York on the North Shore of Long Island. As of the United States 2010 Census, the city population was 26,964.

Part of the early 20th century Gold Coast of the North Shore, Glen Cove has a diverse population. Of Nassau County's five municipalities, Glen Cove is one of the two municipalities that is a city, rather than a town, the other being Long Beach on the South Shore.

The city was also the location of several successful manufacturing facilities in the 20th century.

The city is on the north shore of Long Island, on Long Island Sound. The hills that stretch along the shore are terminal moraines left by glaciers of the last ice age.

The city of Glen Cove is bordered on three sides by the town of Oyster Bay, and on the fourth by the sound.

There were 9,461 households out of which 29.9% had children under the age of 18 living with them, 53.5% were married couples living together, 12.7% had a female householder with no husband present, and 29.7% were non-families. 24.1% of all households were made up of individuals and 11.3% had someone living alone who was 65 years of age or older. The average household size was 2.72 and the average family size was 3.22.

Succeeding cultures of indigenous peoples had lived in the area for thousands of years. At the time of European contact, bands of the Lenape (Delaware) nation inhabited western Long Island, the areas of New York and New Jersey around the harbor, and along the coast through present-day Pennsylvania and Delaware, as well as along the Delaware River. They spoke an Algonquian language. By 1600 the band inhabiting this local area was called the Matinecock after their location.

Glen Cove was used as a port by English migrants from New England and named "Moscheto" before 1668. On May 24, 1668 Joseph Carpenter of Warwick, Rhode Island purchased about 2,000 acres (8.1 km2) of land to the northwest of the Town of Oyster Bay from the Matinecock. Later in that year he admitted four residents of Oyster Bay as co-partners in the project: brothers Nathaniel, Daniel, and Robert Coles, and Nicholas Simkins. The five young men named the settlement Musketa Cove Plantation, "musketa" meaning "place of rushes" in the Lenape language.

In the 1830s, steamboats started regular service on Long Island Sound between New York City and Musketa Cove, arriving at a point still called "The Landing." As "Musketa" was negatively associated with mosquito, in 1834 village residents changed the name to Glen Cove; this was said to be taken from the misheard suggestion of "Glencoe," meaning Glencoe, Scotland. The village added population as workers arrived for jobs at the Duryea Corn Starch factory, which operated until 1900. The name "Duryea" was once suggested as a village name to replace Mosquito Cove but rejected.

By 1850 the village of Glen Cove had become a popular summer resort community for New York City residents. The Long Island Rail Road was extended to Glen Cove in 1867, providing quicker, more frequent service to New York City. The availability of the train and the town's location on Long Island Sound made it attractive to year-round residents, and the population increased. On June 8, 1917, Glen Cove became an independent city, separating from the Town of Oyster Bay after 250 years.

The vistas afforded of Long Island Sound from the town's rolling hills attracted late 19th-century wealthy industrial barons, including Charles Pratt and his sons, as well as J. P. Morgan, and F. W. Woolworth. They built large private estates along the island's North Shore. This expanse of settled wealth was part of what would become known in the 1920s as the Gold Coast of Nassau County. Part of the Morgan property was donated to the city and is now operated as Morgan Park and Beach.

Most of the mansions were adapted to other purposes before the mid-20th century. Winfield Hall, the former home of F.W. Woolworth, is privately owned. Altogether, five Pratt families owned about 5,000 acres (20 km2) in the area. John T. Pratt's estate ("The Manor," designed by Charles A. Platt) is now operated as the Glen Cove Mansion Hotel and Conference Center.

The Braes, the country estate of his son Herbert L. Pratt, was purchased by the Webb Institute in 1945. After renovation, it opened the facility in 1947 as an established specialty college for naval architecture and engineering.

George DuPont Pratt's estate, Killenworth, was purchased by the Soviet Union government for use by its United Nations delegation. The Russians have used it for decades to house visitors and as a weekend retreat for its UN staff. When in the United States for meetings at the United Nations, both Nikita Khrushchev, then premier of the Soviet Union, and Fidel Castro, then president of Cuba, separately stayed at Killenworth.

Like many other suburbs, Glen Cove grew rapidly in population after World War II, when new residential developments were completed that replaced pastureland and farms with subdivisions. Many residents were second and third-generation descendants of eastern and southern European immigrants, and had moved out from childhood homes in Queens or Brooklyn. Some African Americans were descendants of slaves from the colonial period, as colonists had used slaves for domestic help and farm labor; others were descendants of migrants from the South who came to New York City and the area during the Great Migration of the first half of the 20th century.

In the late 20th century, immigrants to the city have been generally from Latin America and eastern Asia. A Sikh gurdwara established in Glen Cove draws members from the ethnic Indian population in the area. 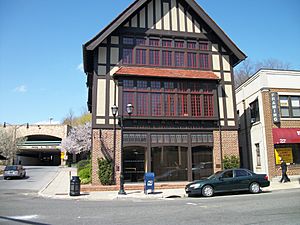 Old Glen Cove Post Office on 51 Glen Street, listed on the NRHP in 2010, now used as an architect's office

The U.S. Post Office at Glen Cove, built in 1932 during the Great Depression, was listed on the National Register of Historic Places in 1989. The Justice Court Building, the former city court and later city hall and police headquarters, was added to the NRHP in 1990. It has been renovated and adapted for use as the North Shore Historical Museum. The Old Glen Cove Post Office on Glen Street was listed on the NRHP in 2010; it is now used as an architect's office.

The city of Glen Cove is served by the following mass transit services:

Its sister city is Sturno, Italy, from where many immigrants came in the early 20th century and settled in Glen Cove. 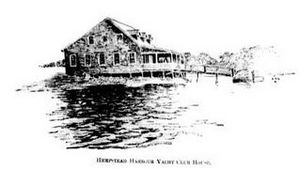 The city of Glen Cove has an extensive waterfront area on Hempstead Harbor and Long Island Sound. There are three public beaches: Crescent Beach, Morgan Beach (at Morgan Park), and Prybil Beach. Hempstead Harbour Yacht Club, Glen Cove City Yacht Club, and the Garvies Point Boating Association are the three major sailing clubs in the City. Brewer's Boardyard is the only boating storage yard left in the city. The city has a boat launch ramp at the end of Garvies Point Road. The city has no facilities for kayaks.

Sailboat racing in the Glen Cove area can be watched from a cliff-top park in the neighboring village of Sea Cliff and from various points on the hills of Garvies Point Preserve. Races are Tuesday, Wednesday, and Friday evenings, and Saturdays during the afternoon. The annual "Around Long Island Sailboat Race" finishes at the end of the breakwater at Morgan Park.

On the waterfront the saying goes, "If you can hear the train, it is going to rain." If you hear that train whistle blow, that means the wind is coming from the east and a storm is on the way.

All content from Kiddle encyclopedia articles (including the article images and facts) can be freely used under Attribution-ShareAlike license, unless stated otherwise. Cite this article:
Glen Cove, New York Facts for Kids. Kiddle Encyclopedia.