Long Beach is a city in Nassau County, New York, United States. Just south of Long Island, it is located on Long Beach Barrier Island, which is the westernmost of the outer barrier islands off Long Island's South Shore. As of the United States 2010 Census, the city population was 33,275. It was incorporated in 1922, and is nicknamed The City By the Sea (as seen in Latin on its official seal).

The city of Long Beach is surrounded by Reynolds Channel to the north, east and west, and the Atlantic Ocean to the south.

As of 2012, Jack Schnirman is the city manager, a position appointed by the City Council. It has been Democratic for many years.

Through the 19th century

Long Beach's first inhabitants were the Algonquian-speaking Rockaway Indians, who sold the area to English colonists in 1643. While the barrier island was used by baymen and farmers, for fishing and harvesting salt hay, no one lived there year-round for more than two centuries.

In 1849, Congress established a lifesaving station.

Austin Corbin, a builder from Brooklyn, was the first to attempt to develop the island as a resort. He formed a partnership with the Long Island Rail Road (LIRR) to finance the New York and Long Beach Railroad Co., which laid track from Lynbrook to Long Beach in 1880. That same year, Corbin opened Long Beach Hotel, a row of 27 cottages along a 1,100-foot (340 m) strip of beach, which he claimed was the world's largest hotel. In its first season, the railroad brought 300,000 visitors to Long Island. By the next spring, tracks had been laid the length of the island, but they were removed in 1894 after repeated washouts from winter storms. 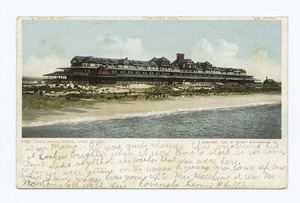 He gathered investors, and acquired the oceanfront from private owners and the rest of the island from the Town of Hempstead in 1907; he planned to build a boardwalk, homes, and hotels. Reynolds had a herd of elephants marched in from Dreamland, ostensibly to help build the Long Beach Boardwalk; he had created an effective publicity stunt. Dredges created a channel 1,000 feet (300 m) wide on the north side of the island to provide access by large steamboats and sea planes to transport more visitors; the new waterway was named Reynolds Channel. To ensure that Long Beach lived up to his billing it "The Riviera of the East", he required each building to be constructed in an "eclectic Mediterranean style", with white stucco walls and red-clay tile roofs. He built a theater called Castles by the Sea, with the largest dance floor in the world, for dancers Vernon and Irene Castle.

After Reynolds' corporation went bankrupt in 1918, the restrictions were lifted. The new town attracted wealthy businessmen and entertainers from New York and Hollywood.

On July 29, 1907, a fire broke out at the Long Beach Hotel and burned it to the ground. Of the 800 guests, eight were injured by jumping from windows, and one woman died. The fire was blamed on defective electric wiring. A church, several cottages and the bathing pavilion were also destroyed. Trunks belonging to the guests, which had been piled on the sand to form "dressing rooms", were looted by thieves. A dozen waiters and others were apprehended by the police, who recovered $20,000 worth of jewelry and other stolen property.

The community became an incorporated village in 1913 and a city in 1922.

In 1923, the prohibition agents known simply as Izzy and Moe raided the Nassau Hotel and arrested three men for bootlegging. In 1930, five Long Beach Police officers were charged with offering a bribe to a United States Coast Guard officer to allow liquor to be landed. Corruption became rampant in Long Beach by then; in 1922, the state Legislature designated Long Beach a city and William H. Reynolds was elected the first mayor. Shortly thereafter, Reynolds was indicted on charges of misappropriating funds. When he was found guilty, the clock in the tower at city hall was stopped in protest. When a judge released Reynolds from jail later that year on appeal, almost the entire population turned out to greet him, and the clock was turned back on.

By the 1940s and 1950s, with the advent of cheap air travel attracting tourists to more distant places, and air-conditioning to provide year-round comfort, Long Beach had become a primarily bedroom community for commuters to New York City. It still attracted many summer visitors into the 1970s. The rundown boardwalk hotels were used for temporary housing for welfare recipients and the elderly, until a scandal around 1970 led to many of the homes' losing licenses. At that time, government agencies were also "warehousing" in such hotels many patients released from larger mental hospitals. They were supposed to be cared for in small-scale community centers. The 2.2-mile (3.5 km) boardwalk had a small amusement park at the foot of Edwards Boulevard until the 1980s. In the late 1960s, the boardwalk and amusement park area were a magnet for youth from around Long Island, until a police crackdown on drug trafficking ended that. While a few businesses remain on the boardwalk, it attracts bicyclists, joggers, walkers and people-watchers. 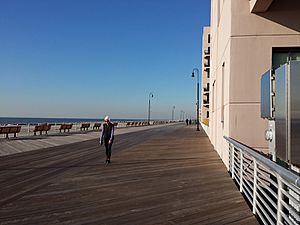 The newly rebuilt boardwalk in November 2013.

Beginning in the 1980s and accelerating in the 1990s, Long Beach has begun an urban renewal, with new housing, new businesses and other improvements. Today, the city is again a popular bedroom community, for people working in New York who want the quiet beach atmosphere. With summer come local youths and college students and young adults who rent bungalows on the West End; they frequent the local bars and clubs along West Beech Street. Just behind the boardwalk near the center of the city, however, vacant lots now occupy several blocks that once housed hotels, bathhouses and the amusement park. Because attempts to attract development (including, at one time, Atlantic City-style casinos) to this potential "superblock" have not yet borne fruit, the lots comprise the city's largest portion of unused land.

On October 29, 2012, Hurricane Sandy struck Long Beach. As a result of flooding, hundreds of vehicles were totaled and houses suffered various levels of damage. The estimated cost of all the damage was over $250 million. The city was without power and running water for two weeks after the storm. The boardwalk was also destroyed during the storm. The City began rebuilding the boardwalk with grants from FEMA and the State of New York. The first two-block section of the new Long Beach boardwalk reopened on July 26, 2013, and the entire boardwalk opened on October 25, 2013.

Nassau Inter-County Express (NICE) has two bus routes that originate in Long Beach; the n15 and n33 travel to Roosevelt Field and Far Rockaway via Rockville Centre and Atlantic Beach, respectively. The n33 does not provide service wholly within Long Beach.

The Long Island Rail Road operates a terminal station at Park Place and Park Avenue with service on the railroad's Long Beach Branch. All other public transportation services in Long Beach converge at this terminal.

According to the United States Census Bureau, the city has a total area of 2.0 square miles (5.2 km2).

The city is on a barrier island off the South Shore of Long Island. It shares the island with Atlantic Beach to the west and Lido Beach and Point Lookout to the east.

Within its section of the barrier island, the city takes up the entire north-south span, fronting on both Reynolds Channel to the north and the Atlantic Ocean to the south. A drawbridge, the Long Beach Bridge, connects it to Island Park, a small island community between Long Beach and the mainland of Long Island. To the west, another drawbridge, the Atlantic Beach Bridge, connects the island to Lawrence on the mainland of Long Island. The Loop Parkway, to the east along the Lido Beach and Point Lookout borders, connects the island to nearby Jones Beach and, going in the opposite direction, to the rest of the expansive Long Island state parkway system by the Meadowbrook State Parkway.

The first inhabitants on the Long beach barrier island were the Rockaway Indians; the Island was sold to the New Netherland colonists in 1643. Local Long Island baymen and farmers used the island for fishing and harvesting salt hay; no people lived on the Island year round for more than two centuries. The United States Congress established a lifesaving station in 1849, a dozen years after 62 people died when the barque Mexico carrying Irish immigrants to New York ran ashore on New Year's Day.

Development began on the island as a resort and was organized by Austin Corbin, a builder from Brooklyn New York. Austin Corbin formed a partnership with the Long Island Rail Road to finance the New York and Long Beach Railroad Company which laid tracks from Lynbrook, New York to Long Beach in 1880. The company also opened the 1,100-foot-long Long Beach Hotel, at the time the largest in the world. The railroad brought 300,000 visitors the first season. By the next spring, tracks had been laid almost the full length of the Long Beach island, but after repeated winter storm washouts they were removed in 1894.

Long Beach has a moderate humid subtropical climate (Cfa) under the Köppen climate classification, with hot summers and cool winters. It is one of the northernmost locations in this climate zone, allowing for the growth of warmer climate plants like Mimosa, Crape Myrtle, Southern Magnolia, and Sweetgum often seen further south. Precipitation is evenly distributed year round, mostly in the form of rain although snowfall occurs each winter. Its climate is tempered by the Atlantic Ocean current.

Unlike most suburbs, Long Beach is a high-density community. Fewer than 40% of the homes are detached houses, and the city ranks as the 35th densest community in the United States. The city is less than a mile wide from ocean to bay and about three and a half miles long. The city is divided into the West End, home to many small bungalows, and the East End. West of New York Avenue, the barrier island is less than a half mile wide and West Beech Street is the main east/west commercial street. 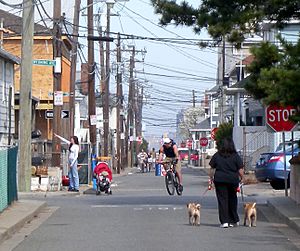 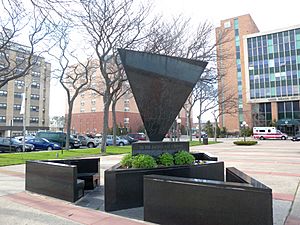 Kennedy Plaza in the Central District.

Multiple sites in Long Beach are listed on the National Register of Historic Places, including: 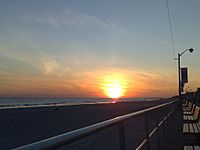 In films and television

The right section is Long Beach:

All content from Kiddle encyclopedia articles (including the article images and facts) can be freely used under Attribution-ShareAlike license, unless stated otherwise. Cite this article:
Long Beach, New York Facts for Kids. Kiddle Encyclopedia.