Point Lookout is a hamlet and census-designated place (CDP) located in the town of Hempstead in Nassau County, New York, United States. The population was 1,219 at the time of the 2010 census. The town is mostly made up of residential homes, with several small businesses on Lido Boulevard. The town is surrounded on three sides by water. Today, Point Lookout has become a popular location for summer residences. Among its inhabitants, it is commonly referred to as "PLO".

Point Lookout is located at the east end of Long Beach Barrier Island. It is adjacent to Lido Beach, which in turn abuts the city of Long Beach, to the west. Point Lookout covers a total area of 0.2 square miles (0.52 km2).

Long Beach Barrier Island, which lies between Reynolds Channel and the Atlantic Ocean, was originally formed by glacial deposits and includes a variety of bays, dunes, ponds, marshes, and ocean shoreline, which supports a complex ecosystem that includes a wide variety of flora and fauna. Jones Inlet separates it from Jones Beach Island.

There were 616 households, out of which 25.8% had children under the age of 18 living with them, 53.9% were married couples living together, 10.9% had a female householder with no husband present, and 32.8% were non-families. Of all households 26.9% were made up of individuals, and 12.2% had someone living alone who was 65 years of age or older. The average household size was 2.39 and the average family size was 2.91.

Point Lookout's first known inhabitants were Merrick (Meroke) Native Americans, a tribe of the Algonquin people. The first European settlers in Point Lookout were Dutch, who arrived in the 1640s, followed by the English, in the 1660s.

The barrier beach on which Point Lookout sits has been, in one incarnation or another, there for hundreds, if not thousands of years. The first mention of Point Lookout begins to appear in the mid 19th century, as a location for whalers, and as a dangerous spot for ships. A U.S. Life Saving Station was established at Point Lookout in 1872; ironically, it was due to the tragic wreck of the U.S.S. Mexico on January 2, 1837 that a U.S. Life Saving Service was created; the service remained there until farmers grew salt hay on the marshes that stretch behind the site. 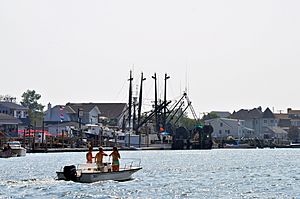 Approaching Point Lookout from the northeast by water (2013).

A series of hotel and seasonal bungalows was built, as was a seasonal railroad connecting Point Lookout to Long Beach, but nearly all these structures were destroyed over time by either winter storms or fire. During the summer months ferries from the Woodcleft Canal in Freeport brought hundreds of day-trippers to Point Lookout's beaches, and for those who lived in Point Lookout, or in the small community to the east called Nassau By the Sea, the barrier island was a paradise.

In 1906, Senator William Reynolds of Brooklyn led a consortium that purchased the entire barrier island. In 1918, Nassau By the Sea was nearly wiped out by fire.

Our Lady of the Miraculous Medal Church is located at 75 Parkside Drive, Point Lookout, NY 11561.

All content from Kiddle encyclopedia articles (including the article images and facts) can be freely used under Attribution-ShareAlike license, unless stated otherwise. Cite this article:
Point Lookout, New York Facts for Kids. Kiddle Encyclopedia.