Hempstead is one of the three towns in Nassau County, New York, United States, occupying the southwestern part of the county, in the western half of Long Island. Twenty-two incorporated villages are completely or partially within the town. Hempstead's combined population was 759,757 at the 2010 Census, the majority of the population of the county and by far the most of any town in New York. Also, a village named Hempstead is within the Town.

The town was first settled around 1644 following the establishment of a treaty between English colonists, John Carman and Robert Fordham, and the Lenape Indians in 1643. Although the settlers were from the English colony of Connecticut, a patent was issued by the government of New Netherland after the settlers had purchased land from the local natives. This transaction is depicted in a mural in the Hempstead Village Hall, reproduced from a poster commemorating the 300th anniversary of Hempstead Village.

In local Dutch-language documents of the 1640s and later, the town was invariably called Heemstede, and several of Hempstead's original 50 patentees were Dutch, suggesting that Hempstead was named after the Dutch town and/or castle Heemstede, which are near the cities of Haarlem and Amsterdam. However, the authorities possibly had Dutchified a name given by co-founder John Carman, who was born in 1606 in Hemel Hempstead, Hertfordshire, England, on land owned by his ancestors since the 13th century.

In 1664, the settlement under the new Province of New York adopted the Duke's Laws, austere statutes that became the basis upon which the laws of many colonies were to be founded. For a time, Hempstead became known as "Old Blue", as a result of the "Blue Laws".

During the American Revolution, the Loyalists in the south and the American sympathizers in the north caused a split in 1784 into "North Hempstead" and "South Hempstead". With the 1898 incorporation of the Borough of Queens as part of the city of New York, and the 1899 split of Queens County to create Nassau County, some southwestern portions of the Town of Hempstead seceded from the town and became part of the Borough of Queens.

Richard Hewlett, who was born in Hempstead, served as a Lieutenant Colonel with the British Army under General Oliver De Lancey in the American Revolution. Afterward, Hewlett departed the United States with other Loyalists and settled in the newly created Province of New Brunswick in what later became Canada. A settlement there was named Hampstead, in Queen's County next to Long Island in the Saint John River. 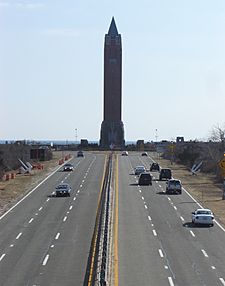 The western town line is the border of Queens County, New York, in New York City. Its northern border, with the Town of North Hempstead and the Town of Oyster Bay, is along the main line of the Long Island Rail Road and along Old Country Road in Garden City heading east towards the Wantagh Parkway. Its eastern border, also with the Town of Oyster Bay, runs parallel to (and several hundred feet west of) Route 107. To the south is the Atlantic Ocean, off the coast of Atlantic Beach, Lido Beach, Point Lookout, and Jones Beach.

The most popular beach on the east coast of the United States, Jones Beach is located in Hempstead. The beach is a popular destination for Long Islanders and residents of New York . The beach itself receives about six million visitors a year.

The town of Hempstead contains 22 villages and 37 hamlets:

In addition, there are a few areas that are not part of any incorporated village or census-designated place:

The Long Island Rail Road's Main Line runs through the northwestern part of the town with stations from Bellerose through Merillon Avenue in Garden City. The Hempstead Branch breaks away from the Main Line in Floral Park, and uses stations from Bellerose into Hempstead. The West Hempstead Branch runs from Valley Stream northeast to West Hempstead. Further south in the town, the Babylon Branch runs from the New York City Line into southern portions of the Town of Oyster Bay with stations between Valley Stream and Seaford. Also the Far Rockaway Branch branches off from Valley Stream and curves to the southwest from that station through Inwood before finally re-entering the city in the Rockaways. Just east of there, the Long Beach Branch breaks away at Lynbrook and runs southeast into Long Beach.

The Town of Hempstead is served primarily by Nassau Inter-County Express bus routes, though some MTA Bus Routes enter Nassau County from Queens. The City of Long Beach also has a separate bus service.

All content from Kiddle encyclopedia articles (including the article images and facts) can be freely used under Attribution-ShareAlike license, unless stated otherwise. Cite this article:
Hempstead, New York Facts for Kids. Kiddle Encyclopedia.