Kids Encyclopedia Facts
This page is about the Long Island Rail Road line. For the section of the route which was incorporated into the New York City Subway in the 1950s, see IND Rockaway Line.

The Far Rockaway Branch is an electrified rail line and service owned and operated by the Long Island Rail Road in the U.S. state of New York. The branch begins at Valley Interlocking, just east of Valley Stream station. From Valley Stream, the line heads south and southwest through southwestern Nassau County, ending at Far Rockaway in Queens, thus reentering New York City. LIRR maps and schedules indicate that the Far Rockaway Branch service continues west along the Atlantic Branch to Jamaica. This two-track branch provides all day service in both directions to the Atlantic Terminal (at Flatbush Avenue) in Brooklyn, with limited weekday peak service to/from Penn Station in Midtown Manhattan. During peak hours, express service may bypass Jamaica station. 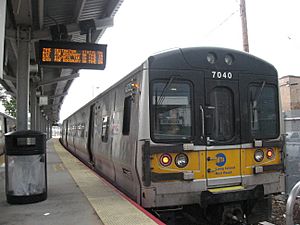 LIRR train at the existing terminus in Far Rockaway.

The South Side Railroad built the branch in 1869 under a subsidiary called the Far Rockaway Branch Railroad. While constructing it in summer 1869, the company installed about 700 feet (200 m) of tracks across William B. McManus's farmland near Lawrence. However, the transaction had not been completed, and McManus and some friends tore up the track the next night; after a legal battle, the company paid McManus. The same year, the South Side established a subsidiary named the Hempstead and Rockaway Railroad designed to connect the line to the up-and-coming Southern Hempstead Branch. The H&R was dissolved in 1871.

Due to the success of the branch, the South Side built the 200-foot (60 m) South Side Pavilion, a restaurant on the beach at what is today Beach 30th Street. With an additional subsidiary known as the Rockaway Railway (1871-1872; Not to be confused with the Rockaway Village Railroad), the line was extended west to the Seaside House (Beach 103rd Street) in 1872 and Neptune House (Beach 116th Street) in 1875. Along with the rest of the South Side Railroad, the Far Rockaway Branch was acquired by the Long Island Rail Road in 1876.

Two stations on the branch were built as Arverne (LIRR station), both of which were built by Remington Vernam. The first of which was in 1888 at Gaston Avenue (Beach 67th Street). It had a large tower, was shaped like a Victorian hotel and had a connection to the Ocean Electric Railway, as did much of the Rockaway Beach and Far Rockaway branches. Due to a quarrel between the LIRR and Vernam, another Arverne Station was built at Straiton Avenue in 1892. From then on, the original Arverne station was known as Arverne-Gaston Avenue (LIRR station) to distinguish it from the Arverne-Straiton Avenue (LIRR station).

Between the late 1960s and 1990s, various stations along the Far Rockaway Branch were given high-level platforms in order to accommodate modern M1, M3, and M7 railcars.

The Far Rockaway Branch has the distinction of containing the oldest surviving railroad station on Long Island, and the only existing building constructed by an LIRR predecessor, specifically Hewlett (LIRR station). In 2003, the LIRR closed that station replacing it with a new one diagonally across the railroad crossing on Franklin Avenue, however the original SSRLI Depot still remains intact to this day.

All content from Kiddle encyclopedia articles (including the article images and facts) can be freely used under Attribution-ShareAlike license, unless stated otherwise. Cite this article:
Far Rockaway Branch Facts for Kids. Kiddle Encyclopedia.