Laurelton is a largely middle-class neighborhood in the New York City borough of Queens and part of the former town of Jamaica. Merrick Boulevard, which bisects the community in a generally east–west direction, forms its commercial spine. It is bounded by Springfield Boulevard to the west, 121st Avenue to the north, Laurelton Parkway to the east, and Conduit Avenue to the south.

Laurelton is located in Queens Community District 13 and its ZIP Codes are 11413 and 11422. It is patrolled by the New York City Police Department's 105th Precinct.

Laurelton derives its name from the Laurelton station on the Long Island Rail Road, which was named for the laurels that grew there over 100 years ago. It was modeled after an English village, with stately Tudor-style homes, both attached and detached. There are co-ops in converted garden apartment complexes and some new construction with more modern designs, but no high-rise buildings, which has enabled Laurelton to keep its small town feel. The area of Laurelton closest to Rosedale and Cambria Heights is mostly made up of single-family homes. The area abutting Springfield Gardens contains many two-family homes. The area south of Merrick Boulevard contains many large, individually designed houses while many of the blocks to the north, running westward from Francis Lewis Boulevard, have attached, Tudor-style rowhouses. The eastern part of Laurelton contains a series of streets with planted center malls.

In the 1930s through the 1970s, Laurelton was home to many Jewish-American families, home to female American radio trio NBC radio vocal harmonists Three X Sisters during the 1930s, but succeeding generations since the 1960s have included various Afro-descended groups, including African-Americans, Caribbean/West Indians and West Africans, many of whom were attracted to Laurelton's more suburban-like environment. 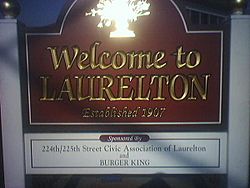 Belt Parkway exits 24A/B, 23A, and 22 service Laurelton. The section of the Belt Parkway known as the Laurelton Parkway was the subject of a master plan as part of the city's emerging system of greenways and bikeways. The restoration of this 1.5 miles (2.4 km) link was completed in 2006.

The Laurelton station on the Long Island Rail Road, located at 225th Street and 141st Road, offers service via the Far Rockaway and Long Beach branches.

All content from Kiddle encyclopedia articles (including the article images and facts) can be freely used under Attribution-ShareAlike license, unless stated otherwise. Cite this article:
Laurelton, Queens Facts for Kids. Kiddle Encyclopedia.