Springfield Gardens is a neighborhood in the southeastern area of the New York City borough of Queens, bounded to the north by St. Albans, to the east by Laurelton and Rosedale, to the south by John F. Kennedy International Airport, and to the west by Farmers Boulevard. The neighborhood is served by Queens Community Board 12. The area, particularly east of Springfield Boulevard, is sometimes also referred to as Brookville.

The area was first settled by Europeans in 1660, and was subsequently farmed until the mid nineteenth-century.

Major residential development came in the 1920s as Long Island Rail Road service was expanded to the area at the Springfield Gardens station (closed in 1979). Between 1920 and 1930 the population increased from 3,046 to 13,089, with a lot of the newcomers being people from Brooklyn seeking out suburban homes. In 1927, the name of the community was changed to the more elegant Springfield Gardens.

Today the area maintains its low-rise suburban nature, and is home to many Caribbean immigrants including Jamaicans, Haitians, and Guyanese. It also is home to a majority African-American population. Many homes have been torn down and remade for more families as more people move into the neighborhood. Part is in a Registered historic District. Springfield Gardens is located within zip codes 11434 (western part) and 11413 (eastern part). 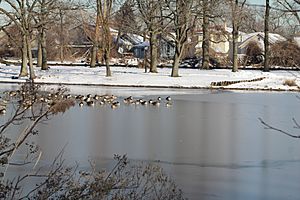 The Springfield Park consists of 23.54 acres (9.53 ha), including the sizable Springfield Lake at its center. It is located on the west side of Springfield Boulevard between 145th Road and 147th Avenue.

Brookville is served by the Rosedale and Laurelton Long Island Rail Road stations. Service is provided by the Far Rockaway Branch and Long Beach Branch. The CityTicket program is available at these stations.

The Q85 bus travels along South Conduit Boulevard towards Rosedale or Green Acres Mall, and North Conduit Boulevard towards the Jamaica Center – Parsons/Archer subway station (E J and ​Z trains). The Q111 travels to Rosedale and Jamaica, Queens via 147th Avenue along with the Q113 and Q114 via 147th Avenue to Jamaica, Queens and Far Rockaway. No express bus routes serve Brookville directly however the X63, provides rush hour only service to neighboring Rosedale. The Q77 bus travels along Springfield Boulevard and Francis Lewis Boulevard to Jamaica-165 St Bus Terminal and terminates at the border of Brookville and Springfield Gardens on 145th Road and Springfield Boulevard.

All content from Kiddle encyclopedia articles (including the article images and facts) can be freely used under Attribution-ShareAlike license, unless stated otherwise. Cite this article:
Springfield Gardens, Queens Facts for Kids. Kiddle Encyclopedia.