Kids Encyclopedia Facts
Not to be confused with Cambria, New York.

Cambria Heights is a residential neighborhood in the southeastern portion of the New York City borough of Queens. It is bounded by Springfield Boulevard and Francis Lewis Boulevard to the west, the Elmont, Nassau County border on the east, Queens Village to the north, St. Albans to the west, and Montefiore Cemetery and Laurelton, Springfield Gardens and Rosedale to the south. As of 2010, Cambria Heights's population was 18,677. The neighborhood is part of Queens Community Board 13.

The original population consisted primarily of Roman Catholics of Italian, German, and Irish descent, and Jewish families relocating from Brooklyn. The present neighborhood has a large middle class Caribbean and African American population. The median home cost is $450,600.

The public elementary schools in Cambria Heights are PS 176 Cambria Heights (grades PK-5) and PS/MS 147 Ronald McNair (PK-8). There are four magnet high schools on the campus of Andrew Jackson High School, which are dedicated to: arts and humanities; business computer applications; mathematics, science and technology; and law, government and community service.

Bus lines that serve through the neighborhood include the Q4, Q27, Q77, Q83, Q84 local buses, connecting to the New York City Subway and other bus routes in Queens, as well as the X64 express bus. 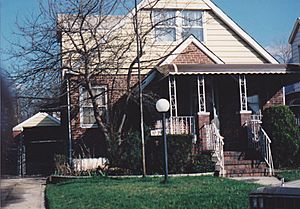 Notable current and former residents of Cambria Heights include:

All content from Kiddle encyclopedia articles (including the article images and facts) can be freely used under Attribution-ShareAlike license, unless stated otherwise. Cite this article:
Cambria Heights, Queens Facts for Kids. Kiddle Encyclopedia.