Richmond Hill is a commercial and residential neighborhood located in the southwestern section of the New York City borough of Queens. The area borders Kew Gardens and Forest Park to the north, Jamaica and South Jamaica to the east, South Ozone Park to the south, and Woodhaven and Ozone Park to the west. The neighborhood is split between Queens Community Board 9 and 10.

Richmond Hill is located between Kew Gardens and Forest Park to the north, Jamaica and South Jamaica to the east, South Ozone Park to the south, and Woodhaven and Ozone Park to the west. Hillside Avenue forms its northern boundary with Kew Gardens east of Lefferts Boulevard, while Forest Park and the right-of-way of the Long Island Rail Road (LIRR)'s Montauk Branch form its northern edge west of Lefferts. Its western boundary north of Atlantic Avenue is formed by the LIRR's abandoned Rockaway Beach Branch; south of Atlantic, the western border lies between 104th and 107th Streets. The southern border extends to around 103rd Avenue or Liberty Avenue. The Van Wyck Expressway abuts the eastern end of the community. The portion of the neighborhood south of Atlantic Avenue is also known as South Richmond Hill. 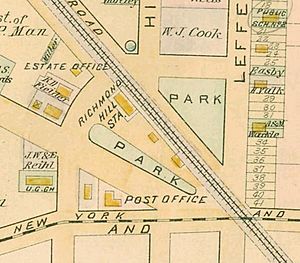 Development around railroad station, after two decades of operation, on an 1891 map

The hill referred to as Richmond Hill is a moraine created by debris and rocks collected while glaciers advanced down North America during the Wisconsin glaciation. Prior to European colonization, the land was occupied by the Rockaway Native American group, for which the Rockaways were named. In 1660, the Welling family purchased land in what was then the western portion of the colonial town of Rustdorp. The land would become the Welling Farm, while Rustdorp would be renamed Jamaica under British rule in 1664. The Battle of Long Island, one of the bloodiest battles of the Revolutionary War, was fought in 1776 along the ridge in present-day Forest Park, near what is now the golf course clubhouse. Protected by its thickly wooded area, American riflemen used guerrilla warfare tactics to attack and defeat the advancing Hessians. One of the sites that would make up modern Richmond Hill, Lefferts Farm, was said to be the site of a Revolutionary War battle. In January 1853, a Farming community was established on the south side of Jamaica Avenue between 110th and 112th Streets, known as Clarenceville. This land was purchased from the Welling estate.

Richmond Hill's name was inspired either by a suburban town near London or by Edward Richmond, a landscape architect in the mid-19th century who designed much of the neighborhood. In 1868, Albon Platt Man, a successful Manhattan lawyer, purchased the Lefferts, Welling, and Bergen farms along with other plots amounting to 400 acres of land, and hired Richmond to lay out the community. The tract extended as far north as White Pot Road (now Kew Gardens Road) near modern Queens Boulevard; The area reminded Man of the London suburb, where his family resided. Man's sons would later found the nearby Kew Gardens neighborhood from the northern portion of the land.

Streets, schools, a church, and a railroad were built in Richmond Hill over the next decade, thus making the area one of the earliest residential communities on Long Island. The streets were laid down to match the geography of the area. The development of area was facilitated by the opening of two railroad stations. These were the Clarenceville station on the Brooklyn and Jamaica Railroad, at Atlantic Avenue and Greenwood Avenue (now 111th Street); and the Richmond Hill station at Park Street (now Hillside Avenue) near Jamaica and Lefferts Avenues on the Montauk railroad line between Long Island City and eastern Long Island. By 1872, a post office was established in the neighborhood, while the Clarenceville neighborhood was merged into Richmond Hill. Richmond Hill was incorporated as an independent village in 1894, by which time it had also absorbed the Morris Park neighborhood, which had been established in 1885. In 1898, Richmond Hill and the rest of Queens county were consolidated into the City of Greater New York.

The BMT Fulton Street Line was extended east along Liberty Avenue into the area on September 25, 1915, terminating at Lefferts Avenue (now Lefferts Boulevard).was extended east into the neighborhood at Greenwood Avenue (now 111th Street) on May 28, 1917. As the neighborhood's population continued to grow into the 1920s, smaller closely spaced houses and apartment buildings began to replace large private houses.

The Triangle Hofbrau, opened as a hotel in 1893 and as a restaurant in 1893, was a restaurant which was frequented by such stars as Mae West in the 1920s and 1930s. It sat on the triangular piece of land bordered by Hillside Avenue, Jamaica Avenue, and Myrtle Avenue. The building has since been converted to medical offices. Near the northwest corner of Hillside Avenue and Myrtle Avenue sat an old time ice cream parlor, Jahn's. It closed in late 2007. Between Myrtle Avenue and the Montauk Line railroad is a former movie theatre, RKO Keith's Richmond Hill Theater, opened in 1929, functioning since 1968 as a bingo hall. These and several other landmarks are located in the vicinity of the "Richmond Hill Triangle", bracketed by Jamaica Avenue, Myrtle Avenue, and 117th Street. This was historically the commercial center of Richmond Hill. The intersection of Jamaica and Myrtle Avenues is also known as James J. Creegan Square.

The northern edge of Richmond Hill contains the Church of the Resurrection. This Episcopalian church is an 1874 structure and is the oldest house of worship in Richmond Hill. It was placed in the National Register of Historic Places in 2003. Also listed on the National Register of Historic Places are Public School 66 and Saint Benedict Joseph Labre Parish.

The entirety of Community Board 9, which comprises Kew Gardens, Richmond Hill, and Woodhaven, had 148,465 inhabitants as of NYC Health's 2018 Community Health Profile, with an average life expectancy of 84.3 years. This is higher than the median life expectancy of 81.2 for all New York City neighborhoods. Most inhabitants are youth and middle-aged adults: 22% are between the ages of between 0–17, 30% between 25–44, and 27% between 45–64. The ratio of college-aged and elderly residents was lower, at 17% and 7% respectively.

Originally, many European families (Italian, Dutch, British, Irish, Scots, Danish, and German) lived in Richmond Hill. In the 1970s, the neighborhood was predominantly Hispanic. Today, the south side of Richmond Hill consists mostly of South Asian Americans (Indians, Pakistanis, and Bangladeshis) and Indo-Caribbean Americans (Trinidadians, Guyanese, Surinamese, and Jamaicans), who have steadily emigrated to the United States since the 1960s. Richmond Hill also has the largest Sikh population in the city, and 101st Avenue has evolved into Little Punjab, or Punjab Avenue (ਪੰਜਾਬ ਐਵੇਨਿਊ), has emerged in Richmond Hill, Queens.

Richmond Hill and Kew Gardens generally have a lower rate of college-educated residents than the rest of the city as of 2018[update]. While 34% of residents age 25 and older have a college education or higher, 22% have less than a high school education and 43% are high school graduates or have some college education. By contrast, 39% of Queens residents and 43% of city residents have a college education or higher. The percentage of Richmond Hill and Kew Gardens students excelling in math rose from 34% in 2000 to 61% in 2011, and reading achievement rose from 39% to 48% during the same time period. 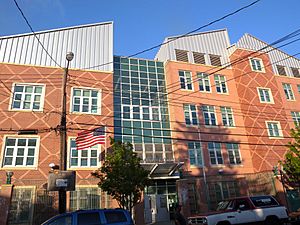 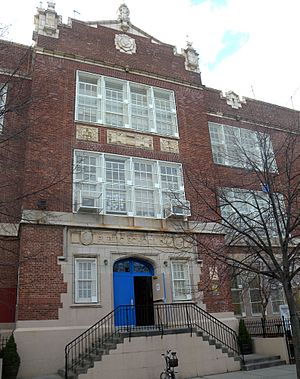 Public schools in Richmond Hill are operated by the New York City Department of Education.

All of the following public elementary schools serve grades PK-5 unless otherwise noted.

Residents are zoned to MS 72 and MS 217 in Briarwood, and MS 137 in Ozone Park. Students also attend other middle schools and high schools in the city.

There was a Long Island Rail Road station named Richmond Hill on Hillside Avenue and Babbage Street along the Montauk Branch. However, this station was closed in 1998 due to low ridership (this station had just one daily rider at the time of its closure). The station and platform remain, though access via the staircase at Jamaica Avenue is gated off. Today the Kew Gardens and Jamaica stations serve the area.

All content from Kiddle encyclopedia articles (including the article images and facts) can be freely used under Attribution-ShareAlike license, unless stated otherwise. Cite this article:
Richmond Hill, Queens Facts for Kids. Kiddle Encyclopedia.