Woodhaven is a neighborhood in the southwestern section of the New York City borough of Queens. It is bordered on the north by Park Lane South and Forest Park, on the east by Richmond Hill, on the south by Ozone Park and Atlantic Avenue, and on the west by the Cypress Hills neighborhood of Brooklyn.

Woodhaven, once known as Woodville, has one of the greatest tree populations in the borough and is known for its proximity to the hiking trails of Forest Park. Woodhaven contains a mixture of urban and suburban land uses, with both low-density residential and commercial sections. It retains the small-town feel of bygone days and is home to people of many different ethnicities.

Woodhaven is bordered on the north by the public Forest Park, and Park Lane South. Woodhaven also borders Richmond Hill to the east, and Ozone Park to the south at Atlantic Avenue. Its western border is the borough of Brooklyn.

The ethnically diverse neighborhood is part of Queens Community Board 9. Woodhaven's ZIP Code is 11421. Woodhaven is served by New York City Department of Education School District #27 (Bounded by Nassau County on one side and Brooklyn on the other).

The Wisconsin Glacier retreated from Long Island some 20,000 years ago, leaving behind the hills to the north of Woodhaven that now are part of Forest Park, the third largest park in Queens. Southern Woodhaven is mostly flat (the lowest elevation is just under 30 feet (9.1 m) ), while northern Woodhaven gradually rises to about 105 feet (32 m) as it approaches Forest Park.

European settlement in Woodhaven began in the mid-18th century as a small town that revolved around farming, with the Ditmar, Lott, Wyckoff, Suydam and Snediker families. British troops successfully flanked General George Washington's Continental Army by a silent night-march from Gravesend, Brooklyn through the lightly defended "Jamaica Pass" actually located in Brooklyn, to win the Battle of Long Island, Queens—the largest battle of the American Revolutionary War, and the first battle after the Declaration of Independence.

Later, Woodhaven became the site of two racetracks: the Union Course (1821) and the Centerville (1825). Union Course was a nationally famous racetrack situated in the area now bounded by 78th Street, 82nd Street, Jamaica Avenue and Atlantic Avenue. The Union Course was the site of the first skinned—or dirt—racing surface, a curious novelty at the time. These courses were originally without grandstands. The custom of conducting a single, four-mile (6 km) race consisting of as many heats as were necessary to determine a winner, gave way to programs consisting of several races. Match races between horses from the South against those from the North drew crowds as high as 70,000. Several hotels (including the Snedeker Hotel and the Forschback Inn) were built in the area to accommodate the racing crowds. 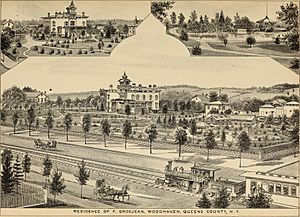 A Connecticut Yankee, John R. Pitkin, developed the eastern area as a workers' village and named it Woodville (1835). In 1853, he launched a newspaper. That same year, the residents petitioned for a local post office. To avoid confusion with a Woodville located upstate, the residents agreed to change the name to Woodhaven. The original boundaries extended as far south as Liberty Avenue.

Two Frenchmen named Charles Lalance and Florian Grosjean launched the village as a manufacturing community in 1863, by opening a tin factory and improving the process of tin stamping. As late as 1900, the surrounding area, however, was still primarily farmland, and from Atlantic Avenue one could see as far south as Jamaica Bay, site of present-day John F. Kennedy International Airport. Since 1894, Woodhaven's local newspaper has been the Leader-Observer. 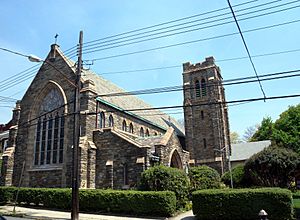 St. Matthew's Episcopal Church, a church at 85-45 96th Street, has a parish hall dates to 1907. The church was built between 1926 and 1927 in the Late Gothic Revival style, designed by the architect Robert F. Schirmer. It was listed on the National Register of Historic Places in 2001. Located behind St. Matthews is the separately listed Wyckoff-Snediker Family Cemetery.

The Forest Park Carousel was listed on the National Register of Historic Places in 2004.

The distinctive St. Anthony's Mansion (which later became St. Anthony's Hospital) stood on a seven-acre tract of land on Woodhaven Boulevard between 89th and 91st Avenues. The hospital significantly helped the scientific community in the creation of breakthroughs in Pulmonary and Heart treatments. The hospital was demolished in the late 1990s. A historical marker has been placed on the site, which is now a residential area known as Woodhaven Park Estates.

One of the oldest homes in Woodhaven is located on 87-20 88th Street. It was first located on Jamaica Avenue. In 1920, the entire house was forced to move to its current location on 88th Street due to the construction of the BMT Jamaica Line. The house was built about or prior to 1910.

Neir's Tavern, founded in Woodhaven in 1829 and in nearly continuous operation since then (except during Prohibition) is one of the older bars in the United States.

In 1836, Long Island Rail Road (LIRR) cars were pulled by horses along Atlantic Avenue. The cars traveled with other traffic at street level and stopped at all major intersections, much as a bus does, except that people would often hop on and hop off while the car was moving. The 1848 LIRR schedule shows an intersection called Union Course (serving that racetrack) and another called Woodville (farther east). With electrification, the LIRR constructed permanent tracks. The Union Course station was opened April 28, 1905. In 1911, the platform was widened to four tracks, and Atlantic Avenue was mostly closed to other traffic. The four tracks split the community and become the border between Woodhaven and Ozone Park.

Elevated transit service to Williamsburg and Lower Manhattan began in 1918 with the operation of the BMT Jamaica Line above Jamaica Avenue. Meanwhile, service on Atlantic Avenue's surface tracks and seven stations between Jamaica and Brooklyn ended on November 1, 1939, and was subsequently replaced in 1942 by underground tracks and a single underground station between Jamaica and Brooklyn. With the removal of surface rail tracks, Atlantic Avenue was again a continuous roadway. The single station in this long tunnel was the Woodhaven Junction station (at 100th Street) on the LIRR's Atlantic Avenue Branch, providing rail service to Jamaica station and Brooklyn (Atlantic Terminal) until it too was closed in 1977. The Woodhaven Junction station was also highly used among beachgoers and commuters, who would transfer to the aboveground LIRR station for trains to Rockaway Beach and Far Rockaway. The Woodhaven Junction station was taken out of service when this section of the Rockaway Beach Branch was abandoned in 1962. 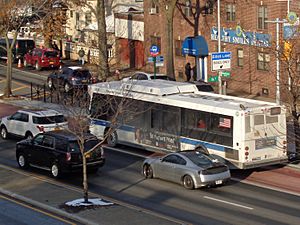 View of a Woodhaven Boulevard bus from Jamaica Avenue

Some Queens transit advocates are pushing to reopen the Rockaway Beach Branch of the LIRR, including the Brooklyn Manor station in Woodhaven, at Jamaica Avenue and 100th Street. An alternate proposal has been to leave the naturally reforested tracks untouched or to convert them into a rail trail similar to Manhattan's High Line.

Woodhaven's major recreational park is Forest Park, known for its golf course, tennis courts, bandshell, carousel, playgrounds, athletic fields and wooded parkland. Every month at Forest Park, the Queens Borough Orchestra and the New York Philharmonic presents Symphony, Jazz and other music events. The Metropolitan Opera, Big Apple Circus, as well as other organizations carry out recreational activities in the famous Bandshell within the park. Woodhaven remains as one of the preserved areas of Queens with traces of its history still in sight.

Dexter Park baseball field, which once occupied 10 acres (40,000 m2) in Woodhaven just east of Franklin K. Lane High School is where baseball history was made in 1930 with the installation of the first engineered lighting system for night games.

Today, Woodhaven is a mostly residential semi-suburban neighborhood with a low-density population, consisting mostly of European and Latin Americans, a small number of African Americans, and a growing number of Asian Americans. As in nearby Queens Village, Hollis, Richmond Hill, and Ozone Park, many families include first generation war veterans. Local residents are quick to point out that Woodhaven is home to a great number of shared cultures, exemplifying the broad range of ethnicities present in the most diverse county in the United States—Queens County, NY. Homes are mainly Victorian and Colonial and many are over 120 years old, thus, many home owners have been convinced by the city to restore their homes through beautification and remodeling. Consisting mainly of one-to-two family homes, the median home sales price is $456,000.

Commerce is centered on Jamaica Avenue which effectively bisects Woodhaven. On this avenue, are a large number of stores, most being small and locally owned. One of the oldest was Lewis of Woodhaven, which had two locations and closed its doors in 2004. Many longtime businesses remain, however. Neir's Tavern first opened in 1829, and some historians argue that it is the city's oldest bar. As of 2016, Woodhaven residents and other preservationists were still petitioning the City of New York to grant the tavern landmark status. Another longtime establishment, Schmidt's Candy, opened in 1925 and is run by the granddaughter of its founder.

Every year, a motorcycle parade on Woodhaven Boulevard commemorates the bravery of war veterans and collects donations for the Salvation Army for the winter holidays. The Salvation Army forwards all of its proceeds to international organizations that can help those people that live in devastated areas such as Darfur, Ethiopia, Chad, and Bangladesh. The parade also collects toys for needy children. Also annually, a street fair takes place on Jamaica Avenue with live music, and other festivities for children; this event enables residents to appreciate diversity from the many different backgrounds the residents of Woodhaven originate.

The scene in the 1990 Martin Scorsese film "Goodfellas", where members of the Mafia showed up after robbing the airport showing off mink coats and pink Cadillacs, took place at Neir's Tavern located on 78th Street. There is an historical marker placed outside the establishment.

The entirety of Community Board 9, which comprises Kew Gardens, Richmond Hill, and Woodhaven, had 148,465 inhabitants as of NYC Health's 2018 Community Health Profile, with an average life expectancy of 84.3 years. This is higher than the median life expectancy of 81.2 for all New York City neighborhoods. Most inhabitants are youth and middle-aged adults: 22% are between the ages of between 0–17, 30% between 25 and 44, and 27% between 45 and 64. The ratio of college-aged and elderly residents was lower, at 17% and 7% respectively.

Woodhaven is ethnically diverse but is majority Hispanic/Latino. It also consists of small number of African Americans, and a growing number of Asian Americans.

Notable current and former residents of Woodhaven include:

All content from Kiddle encyclopedia articles (including the article images and facts) can be freely used under Attribution-ShareAlike license, unless stated otherwise. Cite this article:
Woodhaven, Queens Facts for Kids. Kiddle Encyclopedia.