Kids Encyclopedia Facts
(Redirected from Borough (New York City))
"Five boroughs" redirects here. For the English boroughs controlled for a period by the Vikings, see Five Boroughs of the Danelaw. 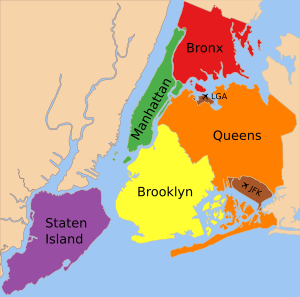 New York City is composed of five boroughs: The Bronx, Brooklyn, Manhattan, Queens, and Staten Island. Each borough is coextensive with a respective county of New York State, making New York City one of the U.S. municipalities in multiple counties. The boroughs of Queens and the Bronx are also Queens County and Bronx County. The other three counties are named differently from their boroughs: Manhattan is New York County, Brooklyn is Kings County, and Staten Island is Richmond County.

All five boroughs came into existence with the creation of modern New York City in 1898, when New York County (including The Bronx), Kings County, part of Queens County, and Richmond County were consolidated within one municipal government under a new city charter. All former municipalities within the newly consolidated city were eliminated.

New York City was originally confined to Manhattan Island and the smaller surrounding islands that formed New York County. As the city grew northward, it began annexing areas on the mainland, absorbing territory from Westchester County into New York County in 1874 (West Bronx) and 1895 (East Bronx). During the 1898 consolidation, this territory was organized as the Borough of the Bronx, though still part of New York County. In 1914, Bronx County was split off from New York County so that each borough was then coterminous with a county.

The term borough was adopted in 1898 to describe a form of governmental administration for each of the five fundamental constituent parts of the newly consolidated city. Under the 1898 City Charter adopted by the New York State Legislature, a borough is a municipal corporation that is created when a county is merged with populated areas within it. The limited powers of the boroughs are inferior to the authority of the government of New York City, contrasting significantly with the powers of boroughs as that term is used in Connecticut, New Jersey, and Pennsylvania, where a borough is an independent level of government, as well as with borough forms used in other states and in Greater London.

New York City is often referred to collectively as the five boroughs, which can unambiguously refer to the city proper as a whole, avoiding confusion with any particular borough or with the Greater New York metropolitan area. The term is also used by politicians to counter a frequent focus on Manhattan and thereby to place all five boroughs on equal footing. In the same vein, the term outer boroughs refers to all of the boroughs excluding Manhattan, even though the geographic center of the city is along the Brooklyn–Queens border. 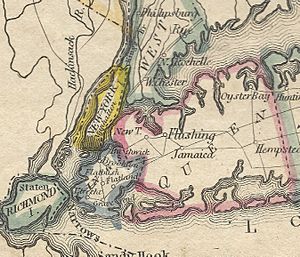 The current 5 boroughs of Greater New York as they appeared in 1814. Bronx was in Westchester County, Queens County included modern Nassau County, Kings County had 6 towns, one of which was Brooklyn, and New York City is shown by hatching in lower Manhattan.

All five boroughs were created in 1898 during consolidation, when the city's current boundaries were established.

The Bronx originally included parts of New York County outside of Manhattan that had previously been ceded by neighboring Westchester County in two stages; in 1874 (southern Yonkers, and the towns of Kingsbridge, West Farms, and Morrisania) and then following a referendum in 1894 (towns of Westchester, Williamsbridge, and the southern portion of Eastchester). Ultimately in 1914, the present-day separate Bronx County became the last county to be created in the State of New York.

The borough of Queens consists of what formerly was only the western part of a then-larger Queens County. In 1899, the three eastern towns of Queens County that had not joined the city the year before—the towns of Hempstead, North Hempstead, and Oyster Bay—formally seceded from Queens County to form the new Nassau County.

The borough of Staten Island, concurrent with Richmond County, was officially the borough of Richmond until the name was changed in 1975 to reflect its common appellation, while leaving the name of the county unchanged.

Description of the boroughs 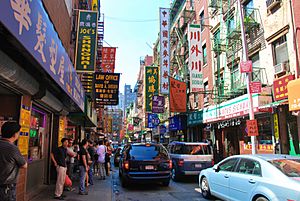 Chinatown in Manhattan, the most densely populated borough of New York City, with a higher density than any individual American city. 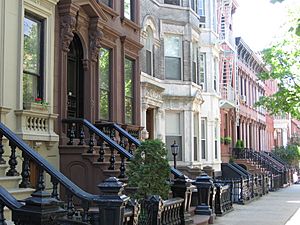 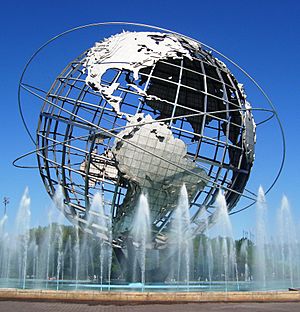 The Unisphere in Queens, the most ethnically diverse urban area in the world. 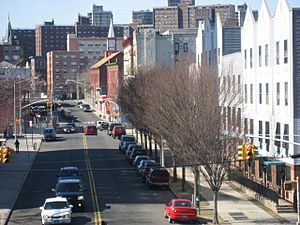 The Bronx, the northernmost borough of New York City and the only borough situated on the United States mainland. 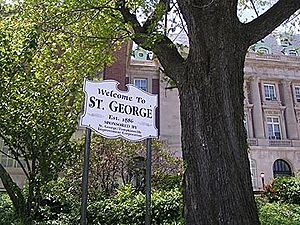 There are hundreds of distinct neighborhoods throughout the five boroughs of New York City, many with a definable history and character to call their own. 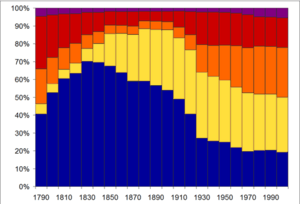 The percentage of New York City population residing in each borough (from bottom to top): 1. Manhattan, 2. Brooklyn, 3. Queens, 4. The Bronx, and 5. Staten Island. Populations before 1898 are for the areas now enclosed in the present boroughs.

Since 1914, each of New York City's five boroughs has been coextensive with a county of New York State – unlike most U.S. cities, which lie within a single county or extend partially into another county, constitute a county in themselves, or are completely separate and independent of any county.

Each borough is represented by a borough president. Brooklyn, Queens, and Staten Island each have a Borough Hall with limited administrative functions. The Manhattan Borough President's office is situated in the Manhattan Municipal Building. The Bronx Borough President's office used to be in its own Bronx Borough Hall but has been in the Bronx County Courthouse for decades. Since the abolition of the Board of Estimate in 1990 (due to a 1989 ruling of the U.S. Supreme Court), the borough presidents have minimal executive powers, and there is no legislative function within a borough. Executive functions in New York City are the responsibility of the Mayor of New York City, while legislative functions reside with the New York City Council. The borough presidents primarily act as spokesmen, advocates, and ceremonial leaders for their boroughs, have budgets from which they can allocate relatively modest sums of money to community organizations and projects, and appoint the members of the 59 largely advisory community boards in the city's various neighborhoods. The Brooklyn and Queens borough presidents also appoint trustees to the local public library systems in those boroughs.

Being coextensive with an individual county, each borough also elects a district attorney, as does every other county of New York State. While the district attorneys of Manhattan and Brooklyn are popularly referred to as "Manhattan D.A. Cyrus Vance, Jr.", or "Brooklyn D.A. Kenneth P. Thompson" by the media, they are technically and legally the district attorneys of New York County and Kings County, respectively. The same goes for Staten Island. There is no such distinction made for the district attorneys of the other two counties, Queens and the Bronx, since these boroughs share the respective counties' names. Because the five district attorneys are, technically speaking, state officials (since the counties are considered to be arms of the state government), rather than officials of the city government, they are not subject to the term limitations that govern other New York City officials such as the mayor, the New York City Public Advocate, members of the city council, or the borough presidents. Some civil court judges also are elected on a borough-wide basis, although they generally are eligible to serve throughout the city.

In some document collections the boroughs used to be designated with a one-letter abbreviation: K for Brooklyn; M for Manhattan; Q for Queens; R for Staten Island, Richmond county; X for the Bronx.

The term "sixth borough" is used to describe any of a number of places that have been metaphorically called a part of New York City because of their geographic location, demographics (they include large numbers of former New Yorkers), special affiliation, or cosmopolitan character. They have included adjacent cities and counties in the New York metropolitan area as well as in other states, U.S. territories, and foreign countries. In 2011, New York Mayor Michael Bloomberg referred to the city's waterfront and waterways as a composite sixth borough during presentations of planned rehabilitation projects along the city's shoreline, including Governor's Island in the Upper New York Bay. The Hudson Waterfront in the U.S. state of New Jersey lies opposite Manhattan on the Hudson River, and during the Dutch colonial era, was under the jurisdiction of New Amsterdam and known as Bergen. Jersey City and Hoboken in Hudson County, New Jersey, are sometimes referred to as the sixth borough, given their proximity and connections by rapid transit PATH trains. Fort Lee, New Jersey, in Bergen County, opposite Upper Manhattan and connected by the George Washington Bridge, has also been called the sixth borough.

All content from Kiddle encyclopedia articles (including the article images and facts) can be freely used under Attribution-ShareAlike license, unless stated otherwise. Cite this article:
Boroughs of New York City Facts for Kids. Kiddle Encyclopedia.