Forest Hills is a neighborhood in the borough of Queens in New York City. Originally, the area was referred to as "Whitepot". Forest Hills is bounded by 62nd Drive, Thornton Place, and Selfridge Street to the west, Metropolitan Avenue to the south, Union Turnpike to the east, and the Grand Central Parkway to the north. Forest Hills Gardens has some of the most beautiful architecture in New York. There is also a great tradition of tennis. Forest Hills Stadium hosted the U.S. Open until 1978 and the West Side Tennis Club offers pristine grass courts for its members. Bustling Austin Street bisects Forest Hills and boasts lots of restaurants and chain stores. Forest Hills is bordered by Flushing Meadows-Corona Park and Forest Park, both of which offer residents hundreds of acres of green space to explore. It is bounded by Burns Street to the north, Union Turnpike to the east, Greenway South and Harrow Street to the south, and Tennis Place and Continental Ave to the west. 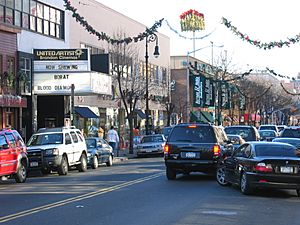 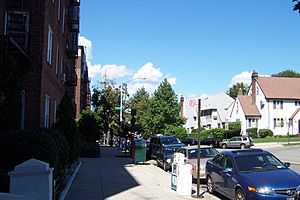 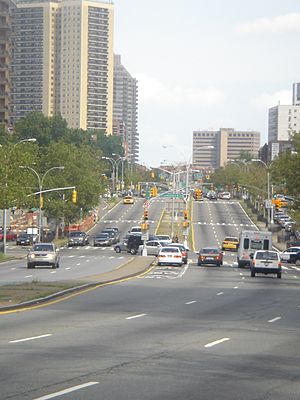 The development of adjacent Forest Park, a park on the southern end of Forest Hills, began in 1895. Starting in 1896, the landscaping firm of Olmsted, Olmsted & Eliot was contracted to provide a plan for the park.

In 1906, Brooklyn attorney Cord Meyer bought abutting land made up of six farms (those of Ascan Bakus, Casper Joost-Springsteen, Horatio N. Squire, Abram V. S. Lott, Sarah V. Bolmer, and James Van Siclen) and then renamed the aggregated 600 acres Forest Hills. There is a street named after Ascan Bakus, Ascan Avenue, in Forest Hills today. In 1909, Margaret Sage, who founded the Russell Sage Foundation, bought 142 acres (0.57 km2) of land from the Cord Meyer Development Company. Grosvenor Atterbury, a renowned architect, was given the commission to design Forest Hills Gardens. The neighborhood was planned on the model of the garden communities of England. As a result, there are many Tudor-style homes in Forest Hills, some more sprawling ones located in Forest Hills Gardens while most are located in the Cord-Meyer section (loosely bounded by 68th Avenue on the north; 72nd Road on the south; 108th Street on the west; and Grand Central Parkway on the east). The construction of this area used a prefabricated building technique; each house was built from approximately 170 standardized precast concrete panels, fabricated off-site and positioned by crane. In 1913, the West Side Tennis Club moved from Manhattan to Forest Hills Gardens. The U.S. Open and its predecessor national championships were held there until 1978, making Forest Hills synonymous with tennis for generations. 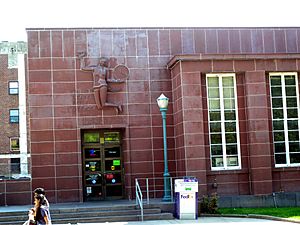 Historically, Forest Hills has had many Jewish residents. The border between Rego Park and Forest Hills is home to many Jews, one of the largest population of such in the world outside of Israel. 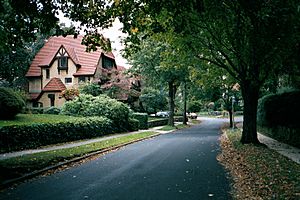 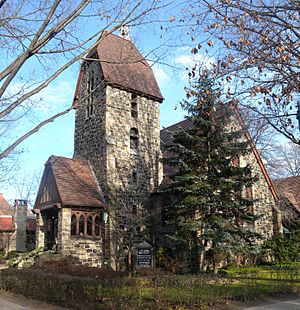 A church in Forest Hills Gardens

The southern part of Forest Hills contains a particularly diverse mixture of upscale housing, ranging from single-family houses, attached townhouses, and both low-rise and high-rise apartment buildings. South of the Long Island Rail Road, the Forest Hills Gardens area is a private community that features some of the most expensive residential properties in Queens County. It was subject to restrictive covenants until the 1970s, which contained no explicit economic, social or racial restrictions even if "working-class people" were said to be excluded by Eric P. Nash in a 2002 New York Times article, in his review of A Modern Arcadia. Forest Hills Gardens was named "Best Community" in 2007 by Cottage Living Magazine. The adjacent Van Court community also contains a number of detached single-family homes. There are also attached townhouses near the Westside Tennis Center and detached frame houses near Metropolitan Avenue. Finally, there are a number of apartment buildings scattered throughout the community. The most notable high-rise apartment buildings are The Continental on 108th St, Kennedy House, the Pinnacle, Parker Towers, the Windsor and a 17-story luxury condo building completed in 2014, the Aston.

On the northwestern edge of Forest Hills, on 62nd Drive and 108th Street, immediately adjacent to the Long Island Expressway is a NYCHA (New York City Housing Authority) low-income housing project that provoked controversy among the residents in the more prestigious areas of Forest Hills when it was constructed in the early 1970s.

The north side of Forest Hills is home to the Cord Meyer community, which contains detached single-family homes. Teardowns and their replacement with larger single family residences has had a significant impact on the architectural integrity of the area. However, the Bukharian Jewish community, whose members have settled in the area in large numbers since the late 1990s, advocating the changes say the bigger homes are needed for their large extended families.

Forest Hills was once the home of the U.S. Open tennis tournament. The event was held at the West Side Tennis Club before it moved to the USTA National Tennis Center in Flushing Meadows Park, about 4 miles (6.4 km) away. When the Open was played at the tennis stadium, the tournament was commonly referred to merely as Forest Hills, just as All-England Lawn Tennis Association Championships are referred to simply as Wimbledon. In the 2001 motion picture, The Royal Tenenbaums, Luke Wilson's character plays a tennis match at the West Side Tennis Club in Forest Hills. A pivotal scene in Alfred Hitchcock's 1951 film Strangers on a Train, in which the main character (played by Farley Granger) is a professional tennis player, features a lengthy championship game at the Club, with distinctive shots of the surrounding community. The Tennis Stadium, which hosted numerous music concerts including The Beatles after the U.S. Open departed for Flushing Meadows, resumed hosting music concerts during the summer of 2013 when the British rock band Mumford & Sons played there to an overflowing crowd. Stadium officials have said they will now host as many as six music or cultural events at the Stadium each season.

Two monuments are erected in Forest Hills Gardens: a tribute to the victims of World War I, the "Great War"; and the mast of the Columbia, the winner of the America's Cup yacht races in both 1899 and 1901.

The Church-in-the-Gardens, St. Luke's Episcopal Church, and United States Post Office are listed on the National Register of Historic Places.

Panoramic view of the skyline 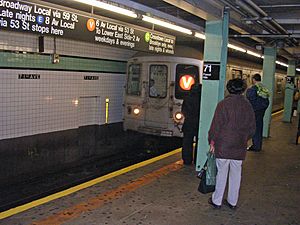 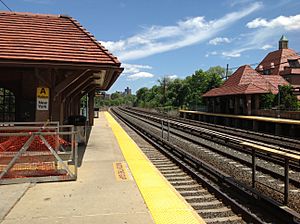 The main thoroughfare is Queens Boulevard; the street's width and complexity have led to a large number of pedestrian deaths, earning it the moniker "Boulevard of Death". Metropolitan Avenue is known for its antique shops. The commercial heart of Forest Hills is a mile-long stretch of Austin Street between Yellowstone Boulevard and Ascan Avenue: the latter thoroughfare was named in 1909 by developer Frederick Backus for his own father, Ascan Backus, II.

Forest Hills was featured as the home setting for fictional comic book character Spider-Man. Loubet Street, in southern Forest Hills, is used in some minor movies.

All content from Kiddle encyclopedia articles (including the article images and facts) can be freely used under Attribution-ShareAlike license, unless stated otherwise. Cite this article:
Forest Hills, Queens Facts for Kids. Kiddle Encyclopedia.