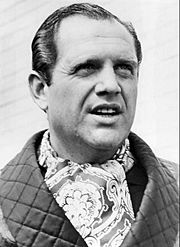 Alan King (Irwin Alan Kniberg, December 26, 1927 – May 9, 2004) was an American movie, television, stage, radio, voice actor, writer, movie producer, and comedian. He was known for his roles in Casio, Rush Hour 2, The Anderson Tapes, Just Tell Me What You Want and in Cat's Eye. He is also known for his voice guest-star role as the Don in Family Guy.

All content from Kiddle encyclopedia articles (including the article images and facts) can be freely used under Attribution-ShareAlike license, unless stated otherwise. Cite this article:
Alan King Facts for Kids. Kiddle Encyclopedia.