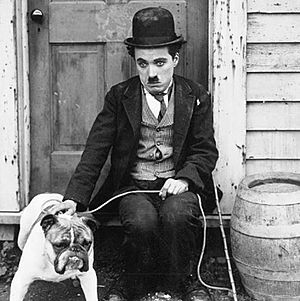 Charlie Chaplin in the film The Champion, 1915

A comedian or comic is a person who seeks to entertain an audience by making them laugh. This might be through jokes or amusing situations, or acting foolish (as in slapstick) or employing prop comedy. A comedian who addresses an audience directly is called a stand-up comedian.

A popular saying, variously quoted but generally attributed to Ed Wynn, is, "A comic says funny things; a comedian says things funny", which draws a distinction between how much of the comedy can be attributed to verbal content and how much to acting and persona.

Since the 1980s, a new wave of comedy, called alternative comedy, has grown in popularity with its more offbeat and experimental style. This normally involves more experiential, or observational reporting, e.g. Alexei Sayle, Daniel Tosh, Louis C.K. and Malcolm Hardee. As far as content is concerned, comedians such as Tommy Tiernan, Des Bishop, and Joan Rivers draw on their background to poke fun at themselves, while others such as Jon Stewart, and Ben Elton have very strong political and cultural undertones.

Comedians can be dated back to 425 BC, when Aristophanes, a comic author and playwright, wrote ancient comedic plays. He wrote 40 comedies, 11 of which survive and are still being performed. Aristophanes' comedy style took the form of satyr plays.

The English poet and playwright William Shakespeare wrote many comedies. A Shakespearean comedy is one that has a happy ending, usually involving marriages between the unmarried characters, and a tone and style that is more light-hearted than Shakespeare's other plays. 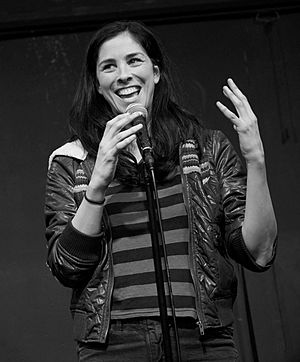 Charles Chaplin was the most popular screen comedian of the first half of the 20th century. He wrote comedic silent films such as Modern Times and The Kid. His films still have a major impact on comedy in films today.

Forbes publishes an annual list of the most financially successful comedians in the world, similarly to their Celebrity 100 list. The list was topped by Jerry Seinfeld from 2006 until 2015, who lost the title to Kevin Hart in 2016. In that year, the eight highest paid comedians were from the United States, including Amy Schumer, who became the first woman to be listed in the top ten.

All content from Kiddle encyclopedia articles (including the article images and facts) can be freely used under Attribution-ShareAlike license, unless stated otherwise. Cite this article:
Comedian Facts for Kids. Kiddle Encyclopedia.