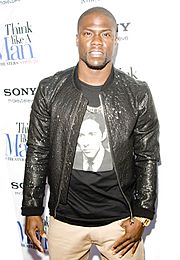 Kevin Hart (born July 3, 1980) is an American actor and comedian. He is known for his roles in Paper Soldiers, Scary Movie 3, Along Came Polly, Soul Plane, The Wedding Ringer, Think Like a Man, Ride Along, Get Hard, The Secret Life of Pets, Captain Underpants: The First Epic Movie, Jumanji: Welcome to the Jungle and The Upside.

Hart was born on July 3, 1980 in Philadelphia, Pennsylvania. He studied the Community College.

Hart has been married to Torrei Hart from 2003 until they divorced in 2011. They had two children. In 2016, he married Eniko Parrish. They have one child.

All content from Kiddle encyclopedia articles (including the article images and facts) can be freely used under Attribution-ShareAlike license, unless stated otherwise. Cite this article:
Kevin Hart Facts for Kids. Kiddle Encyclopedia.