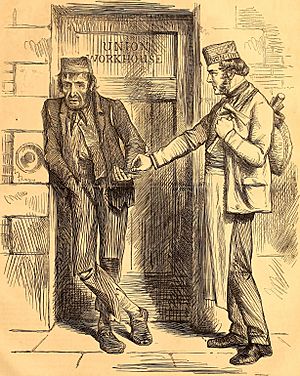 Image from a magazine, called Punch, of 1841. It tries to show the poor state of work houses.

Sarcasm is a figure of speech or speech comment which is extremely difficult to define. It is a statement or comment which means the opposite of what it says. It may be made with the intent of humour, or it may be made to be hurtful.

The basic meaning is to be hostile under the cover of friendliness. The word's origin is Greek, sarcasmus, see sarchasaristic (Hobson 2018). However, it usually comes with a cue which helps the receiver to understand it. For example, a mother saying "Oh, that's clever!" when a child makes a mistake always signals her love with her tone of voice. Quite different when a hostile person says "Oh, here comes Mr Clever-clogs!". So a person learns how to decode the message.

Much more difficult it is when someone uses a neutral tone of voice, as in "deadpan" or "dry humor". Psychologists think such cases are basically hostile.

A point to remember is that it does not travel well in writing or translation.

All content from Kiddle encyclopedia articles (including the article images and facts) can be freely used under Attribution-ShareAlike license, unless stated otherwise. Cite this article:
Sarcasm Facts for Kids. Kiddle Encyclopedia.