Kobe Bean Bryant (August 23, 1978 – January 26, 2020) was an American professional basketball player. He played his entire 20-year career in the National Basketball Association (NBA) with the Los Angeles Lakers. He entered the NBA directly from high school and won five NBA championships. Bryant was an 18-time All-Star, 15-time member of the All-NBA Team, 12-time member of the All-Defensive team, and the 2008 NBA Most Valuable Player (MVP). Widely regarded as one of the greatest basketball players of all time, he led the NBA in scoring during two seasons, ranks fourth on the league's all-time regular season scoring, and ranks fourth on the all-time postseason scoring list. Bryant was the first guard in NBA history to play at least 20 seasons.

Bryant was the son of former NBA player Joe Bryant. He attended Lower Merion High School in Pennsylvania, where he was recognized as the top high-school basketball player in the country. Upon graduation, he declared for the 1996 NBA draft and was selected by the Charlotte Hornets with the 13th overall pick; the Hornets then traded him to the Lakers. As a rookie, Bryant earned himself a reputation as a high-flyer and a fan favorite by winning the 1997 Slam Dunk Contest, and he was named an All-Star by his second season. Despite a feud between the two players, Bryant and Shaquille O'Neal led the Lakers to three consecutive NBA championships from 2000 to 2002.

After the Lakers lost the 2004 NBA Finals, O'Neal was traded to the Miami Heat and Bryant became the cornerstone of the Lakers. He led the NBA in scoring during the 2005–06 and 2006–07 seasons. In 2006, he scored a career-high 81 points against the Toronto Raptors, the second most points scored in a single game in league history behind Wilt Chamberlain's 100-point game in 1962. Bryant was awarded the regular season's Most Valuable Player Award (MVP) in 2008. After the Lakers lost in the 2008 NBA Finals, Bryant led the team to two consecutive championships in 2009 and 2010, earning the Finals MVP Award on both occasions. He continued to be among the top players in the league through 2013, when he suffered a torn Achilles tendon at age 34. Although he recovered from that injury, he suffered season-ending injuries to his knee and shoulder, respectively, in the following two seasons. Citing his physical decline, Bryant retired after the 2015–16 season.

At 34 years and 104 days of age, Bryant became the youngest player in league history to reach 30,000 career points. He became the all-time leading scorer in Lakers franchise history on February 1, 2010, when he surpassed Jerry West. During his third year in the league, Bryant was chosen to start the All-Star Game, and he would continue to be selected to start that game for a record 18 consecutive appearances until his retirement. His four All-Star MVP Awards are tied with Bob Pettit for the most in NBA history. At the 2008 and 2012 Summer Olympics, he won gold medals as a member of the U.S. national team. In 2018, Bryant won the Academy Award for Best Animated Short Film for his film Dear Basketball.

Bryant died on January 26, 2020, aged 41, in a helicopter crash near Calabasas, California, in which his 13-year-old daughter Gianna and seven others also died.

At 9:06 a.m. Pacific Standard Time on January 26, 2020, Bryant, his 13-year-old daughter Gianna, and seven others took off from John Wayne Airport in Orange County, California, in a Sikorsky S-76 helicopter owned by Bryant. The helicopter was registered to the Fillmore-based Island Express Holding Corp., according to the California Secretary of State business database.

The cause of the crash is still unknown, as the helicopter was not equipped with a black box. The Federal Aviation Administration, National Transportation Safety Board, and the FBI have launched investigations into the crash. On January 28, Bryant's identity was officially confirmed using fingerprints. The following day, the Los Angeles County Department of Medical Examiner-Coroner stated that the official cause of death for him and the eight others on the helicopter was blunt force trauma. 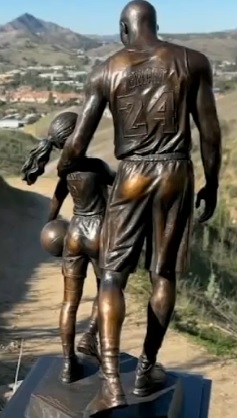 On February 7, Bryant and his daughter were buried in a private funeral in Pacific View Memorial Park in the Corona del Mar neighborhood of Newport Beach, California. A public memorial service was held on February 24 (2/24, marking both Kobe's and Gianna's jersey numbers) at Staples Center with Jimmy Kimmel hosting. Speakers at the service included Vanessa, Jordan, O'Neal, Diana Taurasi and Geno Auriemma.

The NBA had postponed the Lakers' game against the Clippers just two days after the accident on January 28 – the first time an NBA game had been postponed for any reason since the 2013 Boston Marathon bombing led to the postponement of a Celtics game. On January 30, the first game after the crash was played at Staples Center between the Clippers and the Kings, the Clippers honored Bryant before the game, with Southern California native Paul George narrating a video tribute to Bryant. The next day, the Lakers played their first game after the crash against the Trail Blazers. Ahead of the match, the Lakers paid tribute to Bryant and all who lost their lives in the crash with a ceremony held just before tip off, with Usher singing "Amazing Grace" and Boyz II Men singing the National Anthem, while Wiz Khalifa and Charlie Puth reunited to perform "See You Again" – originally their tribute to Paul Walker after his death while filming Furious 7 – at halftime. James also delivered a speech to the crowd before the game, and every starter in the Lakers starting lineup was announced with Bryant's name. The game was the second-most-watched in ESPN history, averaging 4.41 million viewers.

Also, beginning with the Spurs and the Raptors in their game in San Antonio on the day of the crash, teams paid tribute to Bryant at the start of their games with intentional on-court violations referring to his uniform numbers on their first possession – either a 24-second shot clock or an 8-second backcourt violation. On February 15, NBA commissioner Adam Silver announced that the All-Star Game MVP Award would be renamed to the NBA All-Star Game Kobe Bryant Most Valuable Player in Bryant's honor.

Elsewhere, the 62nd Annual Grammy Awards went ahead as scheduled at the Staples Center on the day of the crash, but included tributes by multiple artists and groups, including host Alicia Keys opening the show with a tribute speech and joining Boyz II Men to sing "It's So Hard to Say Goodbye to Yesterday". In May, the Mamba Sports Academy was renamed to Sports Academy out of respect for Bryant.

On January 26, 2022, coinciding with the 2nd anniversary of his death and the helicopter crash, a statue of Kobe Bryant and his daughter Gianna was placed at the site where the crash occurred.

All content from Kiddle encyclopedia articles (including the article images and facts) can be freely used under Attribution-ShareAlike license, unless stated otherwise. Cite this article:
Kobe Bryant Facts for Kids. Kiddle Encyclopedia.