Ardmore is an unincorporated community and census-designated place (CDP) in Delaware and Montgomery counties in the U.S. state of Pennsylvania. The population was 12,455 at the 2010 census. Ardmore is a suburb on the west side of Philadelphia, within Lower Merion Township in Montgomery County and Haverford Township in Delaware County. Originally named "Athensville" in 1853, the community and its railroad station were renamed "Ardmore" in 1873 by the Pennsylvania Railroad, on whose Main Line, west out of Philadelphia, Ardmore sits at Milepost 8.5.

According to the United States Census Bureau, the CDP has a total area of 2.0 square miles (5.1 km2), all of it land. Ardmore is adjacent to Wynnewood (east), Haverford (west), Gladwyne (north), and Havertown (southwest). Residents from South East Ardmore and Wynnewood cooperate as the ArdWood Civic Association. The Ardmore Progressive Civic Association serves the historically black section of Ardmore bordered by ArdWood Civic Association, Haverford College, Montgomery Avenue, and the Montgomery/Delaware County line. The North Ardmore Civic Association represents residents of North Ardmore and Wynnewood north of Montgomery Avenue. The South Ardmore Betterment Alliance is a community group in the southern (Haverford Township) portion of Ardmore which organizes various community activities.

Ardmore's train station is served by SEPTA Regional Rail's Paoli/Thorndale Line (commuter) and Amtrak (intercity) passenger trains. Residents and visitors enjoy several recreation areas, including South Ardmore Park, which is located in neighboring Wynnewood, though many mistake it for Ardmore. Suburban Square, opened in 1928 as one of the earliest shopping centers in the United States, is located adjacent to the Ardmore train station. Ardmore contains the nation's first suburban branch of a major department store, the former Strawbridge & Clothier which opened there in 1930; the former Suburban movie theater—now Not Your Average Joe's Restaurant; the newly relocated Ardmore Farmer's Market; an Apple Store, and the usual selection of mall shops. Other landmarks within the Ardmore Progressive Civic Association borders include the Ardmore Post Office and Ardmore Public Library (part of the Lower Merion Library System) on South Ardmore Avenue; the Ardmore Ice Skating Club on Greenfield Avenue; a public swimming pool; lighted tennis/basketball courts; the community center known as "The Shack"; and two senior housing projects.

Two sites, located in the Haverford Township section of Ardmore, the Merion Golf Club East Course and Pont Reading are listed on the National Register of Historic Places. 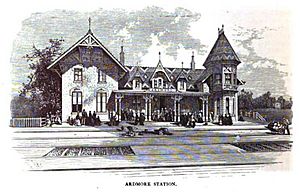 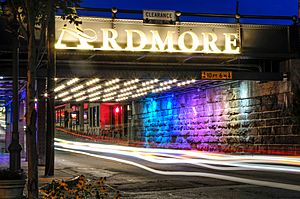 The exit to the Suburban Square in Ardmore
Listen to this article! From the article dated 2013-01-24 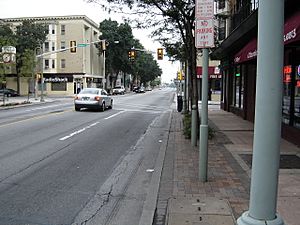 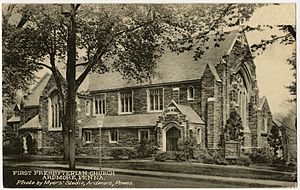 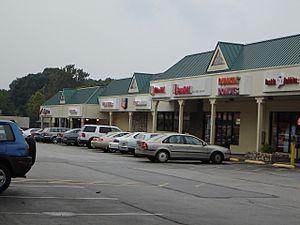 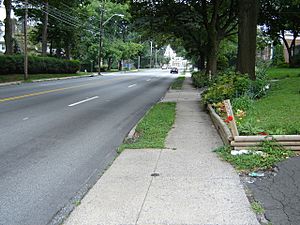 In 2004-2006, Ardmore's business district was the subject of a hotly contested eminent domain battle. A grassroots organization, the Save Ardmore Coalition, along with local businesses and other civic groups, opposed an eminent domain/redevelopment program that would have involved the demolition of historic buildings, in favor of preserving those buildings for other commercial use. In March 2006 the Lower Merion Township Board of Commissioners adopted a resolution disavowing the use of eminent domain for the benefit of private redevelopment projects. The Ardmore battle was also instrumental in prompting the Pennsylvania General Assembly to enact legislation in 2006 restricting the use of eminent domain for private projects.

All content from Kiddle encyclopedia articles (including the article images and facts) can be freely used under Attribution-ShareAlike license, unless stated otherwise. Cite this article:
Ardmore, Pennsylvania Facts for Kids. Kiddle Encyclopedia.