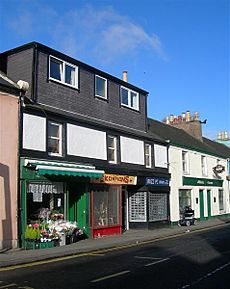 A small business, sometimes called a mom and pop store by some in the United States, is a business that is privately owned and operated. They have a small number of employees and do not sell many things. Whether or not the law says that a business is "small" is different in different countries and industries.

Small businesses are common in many countries. Some examples include: convenience stores, other small shops (such as a bakery), hairdressers, tradesmen, lawyers, accountants, restaurants, guest houses, photographers, small-scale manufacturing, and online business, such as web design and programming.

A small business can be started at a very low cost. It also does not need to be open all the time.

Many organizations in the United States also give help to small businesses, such as the Internal Revenue Service's Small Business and Self-Employed One-Stop Resource.

Small businesses often face a lot of problems because of their size.

In the United States, some of the largest concerns of small business owners are insurance costs, high energy costs and taxes.

Another problem for several small businesses is the fact that much larger businesses can influence their chances for success.

All content from Kiddle encyclopedia articles (including the article images and facts) can be freely used under Attribution-ShareAlike license, unless stated otherwise. Cite this article:
Small business Facts for Kids. Kiddle Encyclopedia.