Biloela ( BIL-oh-EE-lə) is a rural town and locality in Shire of Banana, Central Queensland, Australia. It is situated 120 kilometres (75 mi) inland from the port city of Gladstone at the junction of the Burnett and Dawson highways. Biloela is the administrative centre of Banana Shire, which has an area of 15,729 square kilometres (6,073 sq mi). In the 2016 census, Biloela had a population of 5,758 people.

The name Biloela is generally believed to be the Aboriginal word (possibly from the Sydney area) for black or white cockatoo. The Government dockyards in Sydney were known as Biloela during 1870–1913 in an endeavour to remove the perceived stigma of the prior Cockatoo Island convict establishment.

The town was gazetted in 1924; it was on the Rannes-Monto railway line. Land sales were held in Rannes in December 1924.

The first open-cut mine was established in 1942.

In 1963, work began on the Callide Power Station.

Biloela has a number of heritage-listed sites, including:

Biloela has a warm subtropical climate, with hot to warm temperatures all year round. Winter nights can occasionally drop below freezing, however winters are usually warm and dry, with pleasant sunny days. Summers are hot and humid, with most rain falling with occasional thunderstorms. Record temperatures have ranged from 43.1 °C (109.6 °F) to −4.7 °C (23.5 °F). The wettest 24-hour rainfall was 199.6 millimetres (7.86 in) on 31 January 1978.

The closest fresh water depository is the Callide Dam, however it is often well below capacity due to low rainfall in the area. Despite this, the dam acts as a popular site for water skiing, camping, swimming and fishing. In particular, the dam is a haven for Eel-tailed catfish, Yellowbelly, Saratoga and Barramundi. The largest ever Barramundi recorded was at the 2008 Callide Dam fishing competition, measuring 138 centimetres (54 in). 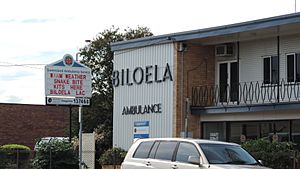 The Banana Shire Council has its shire chambers at 62 Valentine Plains Road. There is an ambulance station at 32 Kariboe Street.

Also in March, the Callide Dam also plays host to the annual Callide Dam Fishing Competition in which a number of introduced stock are caught.

November has a number of annual events: the Arts and Crafts Day, the Brigalow Arts Festival and the Biloela Festival.

All content from Kiddle encyclopedia articles (including the article images and facts) can be freely used under Attribution-ShareAlike license, unless stated otherwise. Cite this article:
Biloela Facts for Kids. Kiddle Encyclopedia.