Central Queensland is an ambiguous geographical division of Queensland (a state in Australia) that centres on the eastern coast, around the Tropic of Capricorn. Its major regional centre is Rockhampton. The region extends from the Capricorn Coast west to the Central Highlands at Emerald, north to the Mackay Regional Council southern boundary, and south to Gladstone. The region is also known as Capricornia. It is one of Australia's main coal exporting regions.

At the 2011 Australian Census the region recorded a total population from the six local government areas of 233,931. 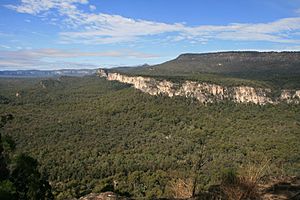 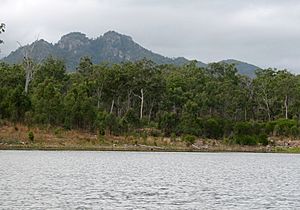 The region contain 33 national parks. Great Keppel Island has been an island tourist attraction since the 1960s. It and several other islands in the area are surrounded by coral reefs. In the west of the region is Queensland's central highlands and the Carnarvon Gorge, which is protected within the Carnarvon National Park. Carnarvon Gorge features white sandstone cliffs, steep-sided gorges a diverse range of significant plant and animal species and many walking tracks. Kroombit Tops National Park provides habitat for the endemic Kroombit tinker frog. Deepwater National Park is good place for turtle watching. From November to March three species of turtle lay their eggs on beaches protected within the park.

Major cities in the region are Emerald, Gladstone and Rockhampton. Some communities on the Capricorn Coast include Byfield, Yeppoon, Great Keppel Island, Emu Park and Cawarral.

All content from Kiddle encyclopedia articles (including the article images and facts) can be freely used under Attribution-ShareAlike license, unless stated otherwise. Cite this article:
Central Queensland Facts for Kids. Kiddle Encyclopedia.