Shire of Livingstone facts for kids

The Shire of Livingstone is a local government area located in the Capricornia region of Central Queensland, Queensland, Australia, to the immediate north and east of the regional city of Rockhampton. The shire, administered from the coastal town of Yeppoon, covered an area of 11,776.3 square kilometres (4,546.9 sq mi), and existed as a local government entity from 1879 until 2008, when it amalgamated with several other councils to become the Rockhampton Region. The Shire was re-established on 1 January 2014 following a successful de-amalgamation referendum in 2013.

Industry within the shire is diverse. Timber is harvested from extensive pine plantations near Byfield in the north. Significant pineapple production takes place within the shire, as well as other agricultural crops. Tourism is increasingly becoming a mainstay of the area, with Keppel Bay and the nearby islands a major drawcard, and more than half of the Shire's population lived in the coastal area centred on Yeppoon and Emu Park. The Shoalwater Bay Military Training Area is also located within the shire. 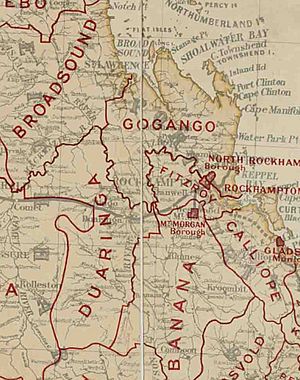 On 11 November 1879, the Gogango Division was established as one of 74 divisions around Queensland under the Divisional Boards Act 1879 with a population of 5023. It covered an area of 16,239 km2 (6,270 sq mi) surrounding but not including the town of Rockhampton—an area significantly greater than the modern Rockhampton Regional Council covers. Its administrative centre was in North Rockhampton.

Capital and people came to the area in greater numbers after the discovery of gold in 1882 at Mount Morgan, about 20 kilometres (12 mi) south of Rockhampton.

A bridge was built spanning the Fitzroy River in 1882, and a year later in September 1883, the Borough of North Rockhampton was proclaimed.

On 6 April 1899, the part of the Gogango Division south of the Fitzroy River split away to form the Fitzroy Division.

With the passage of the Local Authorities Act 1902, Gogango Division became the Shire of Gogango on 31 March 1903, and on 8 August 1903 it was renamed Shire of Livingstone.

On 1 July 1984, the neighbouring City of Rockhampton grew to include some of its outer suburbs which had previously been within the Shire of Livingstone.

On 15 March 2008, under the Local Government (Reform Implementation) Act 2007 passed by the Parliament of Queensland on 10 August 2007, the Shire of Livingstone merged with the City of Rockhampton and the Shires of Mount Morgan and Fitzroy to form the Rockhampton Region.

The Shire of Livingstone includes the following settlements:

All content from Kiddle encyclopedia articles (including the article images and facts) can be freely used under Attribution-ShareAlike license, unless stated otherwise. Cite this article:
Shire of Livingstone Facts for Kids. Kiddle Encyclopedia.