Mount Chalmers is a town and locality in the Shire of Livingstone, Queensland, Australia. In the 2011 census, Mount Chalmers had a population of 216 people.

Gold was found in Mount Chalmers in 1860 but gold mining did not commence in the area until 1869. It was named after Mr Chambers who established a battery. In 1899 copper mining commenced. 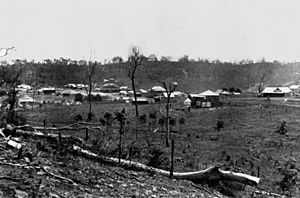 Panoramic view of Mount Chalmers, circa 1909

A provisional school opened on 23 January 1901; it was proclaimed Mount Chalmers State School in 1909. 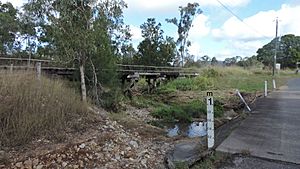 The Yeppoon railway line ceased passenger services in 1978 and closed completely in 2004.

All content from Kiddle encyclopedia articles (including the article images and facts) can be freely used under Attribution-ShareAlike license, unless stated otherwise. Cite this article:
Mount Chalmers, Queensland Facts for Kids. Kiddle Encyclopedia.