Emu Park is a coastal town and locality on the Capricorn Coast located 21 kilometres (13 mi) south of Yeppoon in Queensland, Australia. It is within the local government area of Shire of Livingstone (between 2008 and 2013, it was within the Rockhampton Region). In the 2016 census the locality of Emu Park had a population of 2,130 people.

Home of the famous Singing Ship Monument, the Emu Park land area was first discovered by Captain James Cook in 1770. It overlooks the islands of Keppel Bay, including Great Keppel Island. Emu Park is a popular tourist spot, and has won several tourism awards, and features fishing, surfing, boating, and unspoiled beaches. 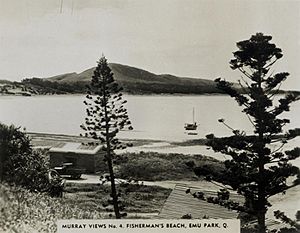 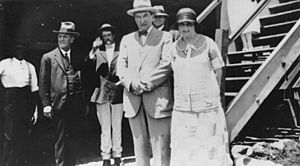 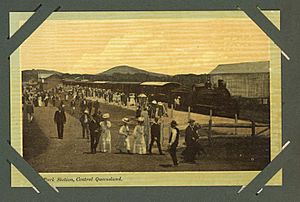 Emu Park's European history dates to the 1860s when the Jardine family established a cattle grazing property south of the current town, at Zilzie, an anagram of Lizzie Jardine.

Emu Park township was established in the 1870s when several Rockhampton families built seaside holiday houses on the hills overlooking the two beaches that are a feature of the town – Fisherman's Beach and Pine Beach. Emu Park was connected to Rockhampton by train in 1888 and became a popular, but fairly select, seaside resort from that time on. A branch to Yeppoon, further to the north was opened in 1910.

Emu Park State School opened on 3 February 1890. The school was burned down on 26 July 1946 and all early records of the school were lost in the blaze. The hall was used as a temporary school. The new school building was designed with 2 classrooms for a total 60 students at a cost of £2315.

By the 1920s the town hd two large hotels, a cinema, court house, public library, shops and many guest houses for visitors. A small pier was opened by Mrs Bruce, wife of the Prime Minister, Stanley Bruce, in 1926 and Bell Park, a shady park on the shores of Fisherman's Beach was established in the 1930s.

The railway link from Rockhampton closed in the 1960s due to declining passenger numbers and the line to Yeppoon no longer exists. Remnants of the Woppaburra people evicted from their homeland in the Greater and South Keppel islands lived on in both Emu Park and Yeppoon.

Emu Park has a number of heritage-listed sites, including:

Emu Park hosts a variety of annual community events including the Festival of the Wind kite festival, the Classics By The Coast vintage car show and Emu Park Lions Club Oktoberfest (now running over 30 years) celebrations. The town's popular market days are held on the third Sunday of each month in Bell Park.

In 2014, it was announced that Emu Park would be permitted to enter team into Rockhampton Senior Rugby League's A-grade, reserve and Under 20's competitions for the 2015 season. Home games will be played at the Emu Park Sports Facility on Hartley Street in Emu Park.

The Emu Park branch of the Queensland Country Women's Association meets at the Kenmore Library at the CWA Hall at 11 Hill Street.

A Centenary of ANZAC memorial is located along the beachfront at the southern end of Emu Street, opposite the Emu Park RSL Sub-Branch.

Since the first stage of the multi-faceted development opened in 2015, the memorial has become a landmark of cultural and historic significance for Central Queensland, while also serving as a tourist attraction for Emu Park itself. The memorial consists of several elements including ANZAC Court featuring a sandstone and sculpture cenotaph, a glass pane artwork, various sandstone plinths, The Gatehouse museum, battle markers, silhouettes of Australian soldiers, a boardwalk and a viewing platform.

In 2011, local artist and Vietnam veteran Ross Coulter proposed part of the Emu Park foreshore be developed to incorporate a commemorative Centenary of ANZAC memorial. Coulter's vision was for a new memorial called Anzac Plaza to be established, to complement the existing RSL precinct where the RSL Memorial Hall had been officially opened in 1949.

However, Coulter died on 5 November 2011, the same day the plans were publicly announced. Despite his death, the RSL vowed to progress with Coulter's vision to have a Centenary of ANZAC Memorial established in Emu Park.

A steering committee was formed in 2013 to move forward with the development which Livingstone Shire Council adopted in 2014, launching the project in partnership with the state government, Emu Park RSL, Bendigo Community Bank and Home Corp.

A symbolic groundbreaking ceremony was held in July 2014, with Coulter's widow Kate Coulter in attendance along with various dignitaries. The first sandstone blocks of the ANZAC Court memorial feature were installed in December 2014, with the first stage of the memorial completed and commissioned in time for Anzac Day commemorations in 2015.

Prior to the 2016 Anzac Day commemorations, more than 200 people attended the official opening of The Gatehouse - a structure that houses 26 separate information panels telling the stories of local men and women from Emu Park who served during the World War I, as well as general information about the war. Later that year, three sandstone plinths were unveiled at the memorial to acknowledge the history of the RSL.

In 2017, more elements to the memorial were added including groups of silhouetted figures representing Australian soldiers, and more than forty battle markers.

Since it opened, the Centenary of ANZAC Memorial Precinct has been used for annual Anzac Day and Remembrance Day services, with more than 5000 people attending the dawn service on 25 April 2018. The landmark is popular with visitors to the town and many community groups often attend the memorial for educational purposes.

Queensland country musician Tony Cook filmed parts of the music video for his single "Country Recognised" at the memorial.

All content from Kiddle encyclopedia articles (including the article images and facts) can be freely used under Attribution-ShareAlike license, unless stated otherwise. Cite this article:
Emu Park, Queensland Facts for Kids. Kiddle Encyclopedia.