Remembrance Day (in Australia, Canada, and the United Kingdom) is a day to remember people who fought and died in wars. It is on November 11th. On that day in 1918 came the end of World War I with Armistice with Germany.

Remembrance Day was started in 1919 by King George V of the United Kingdom. On the same day, other countries also have days to remember war and soldiers. There is Veteran's Day in the United States, and Armistice Day in France, Belgium, New Zealand and other countries. 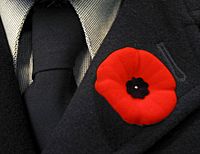 Poppies are often worn on Remembrance Day, and a few days before

There are some things that people do on Remembrance Day at 11:00 AM. That is when the World War ended. At a ceremony for Remembrance Day, a tune called "The Last Post" is played on a bugle (or sometimes a trumpet). Then there is two minutes of silence. At the end of the silence, the bugle plays a tune called "Reveille".

In many countries, many people wear a poppy on Remembrance Day, and for a few days before. The remembrance poppy is an artificial flower to commemorate those who died in war. People bring wreaths made of poppies to Remembrance Day ceremonies. The poppy is a symbol to show they remember the wars, and the soldiers who fought in them. Poppies were chosen as a symbol because they often grew in battlefields after the soldiers stopped fighting.

All content from Kiddle encyclopedia articles (including the article images and facts) can be freely used under Attribution-ShareAlike license, unless stated otherwise. Cite this article:
Remembrance Day Facts for Kids. Kiddle Encyclopedia.