Moment of silence facts for kids 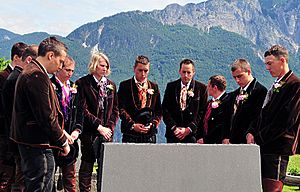 A moment of silence in Carinthia, Republic of Austria, wearing the traditional folk costumes by the Gailtal 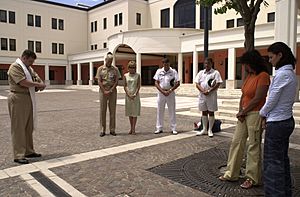 On November 11th, many countries observe a two minute silence to remember those who have died in World Wars. The tradition was started in 1919 exactly one year after the end of World War I. It became an official part of the annual service on Armistice Day.

During the moment of silence, people often bow their heads, remove their hats, and do not speak or move. A person in charge of a group will tell everyone when the moment begins and ends. A moment of silence may come before or after other events with symbolic meaning. Examples of these events are the ringing of bells, the release of doves or balloons, or a bugle playing the "Last Post".

Moments of silence and the separation of church and state

In the United States, some people say that allowing prayer as part of a moment of silence means that moments of silence can make it hard to keep the separation of church and state (the idea that religion and government should not affect each other).

Moments of silence do not have to be time for prayers. They can be used for other thoughts that are not religious. Many people who want time for prayers in public schools and government meetings use moments of silence so that some people can pray and other people do not have to pray. Because they represent the government, and because the Constitution of the United States says that government cannot force people to do religious things, these people cannot tell other people to pray.

When public schools have a moment of silence, Buddhist students could meditate (relax and think calm thoughts), students with other religions such as Christianity, Islam, and Judaism could pray, and atheist students could think about the day ahead.

Colin Powell, a famous government leader, likes having moments of silence in schools. He has said that a simple moment of silence at the start of each school day is a good idea. He also has said that students could use this time to pray, meditate, think, or study.

Many people believe that prayer is not allowed in United States public schools, but this is not true. The Supreme Court ruled in 1962 that students can pray in school, but teachers and other school leaders cannot lead the prayers. Students can form clubs where they can pray, and they can pray alone, but they cannot lead prayers at school events. The reason prayer is not allowed at those times is because of the First Amendment. The First Amendment says that government cannot force people to do religious things, and public schools are part of the government.

In 1976, the state of Virginia allowed schools to have a moment of silence at the start of the school day. This moment would last one minute. In 1985, the Supreme Court said that a "moment of silence" law in Alabama would not work with the United States Constitution and could not be used. In 2005, the state of Indiana made a law that said all public schools had to give students time to say the Pledge of Allegiance and a moment of silence every day.

In April 2000, Virginia changed its law to say that all public schools in Virginia had to have a moment of silence (before this change, schools could choose not to have a moment of silence). In October 2000, a judge named Claude M. Hilton said that the "moment of silence" law was allowed by the United States Constitution. Judge Hilton said that the law has a secular (not religious) purpose, that the law does not make religion more important or less important, and that the law does not make government and religion be too close to each other. Judge Hilton also said, "Students may think as they wish," and that this thinking could be religious or not religious. He said that the only thing students had to do because of the law was sit and be quiet.

In March 2008, Illinois followed Virginia and made a compulsory 30 seconds moment of silence, but was lifted in August.

The American Civil Liberties Union thinks that these laws that say public schools should have moments of silence are a bad idea. They think they are a bad idea because the laws are made to give students time to pray, and that makes religion more important than non-religion.

All content from Kiddle encyclopedia articles (including the article images and facts) can be freely used under Attribution-ShareAlike license, unless stated otherwise. Cite this article:
Moment of silence Facts for Kids. Kiddle Encyclopedia.