Separation of church and state facts for kids 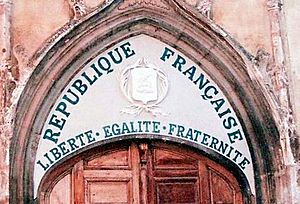 Motto of the French state, on a church door. "[The] French Republic" "Freedom, Equality, Friendship"

Separation of church and state is a phrase that was used by Thomas Jefferson in a letter in 1802 to the Baptist Association in Danbury, Connecticut. The Supreme Court of the United States, in 1962, took the phrase in their decisions to make school prayers unconstitutional. This idea has been put into effect in a number of countries.

All content from Kiddle encyclopedia articles (including the article images and facts) can be freely used under Attribution-ShareAlike license, unless stated otherwise. Cite this article:
Separation of church and state Facts for Kids. Kiddle Encyclopedia.