Returned and Services League of Australia facts for kids

The Returned and Services League of Australia (RSL) is a support organisation for people who have served or are serving in the Australian Defence Force.

The RSL's mission is to ensure that programs are in place for the well-being, care, compensation and commemoration of serving and ex-service Defence Force members and their dependents; and promote Government and community awareness of the need for a secure, stable and progressive Australia. 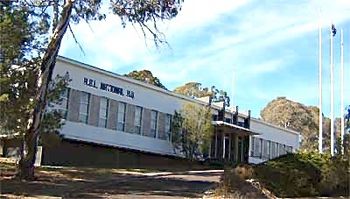 The League evolved out of concern for the welfare of returned servicemen from the first World War. During 1916, a conference recommended the formation of The Returned Sailors and Soldiers Imperial League of Australia (RSSILA) which included representation from Queensland, South Australia, Tasmania and Victoria. New South Wales was admitted to the League the following year, and Western Australia in 1918. In 1927, the Australian Capital Territory formed a branch and was admitted.

At the top of the badge is the Crown signifying allegiance to Queen and country. Below the crown are the national flowers of Australia, Wales, England, Scotland and Ireland – the wattle, the leek, the rose, the thistle, and the shamrock. In the centre of the badge are a sailor, soldier, an airman and service woman who are marching with their arms linked, symbolising friendship and that all services, and all ranks, are united in comradeship. The red of the badge is symbolic of the blood tie of war. The white background stands for the purity of motive – and to render service without personal gain. The blue is a symbol of willingness to render service to a comrade anywhere under the blue sky.

The badge may only be worn by members of the League; and, moreover, it is an offence under the laws of most Australian States/Territories for an individual to wear an RSL badge (a) that has not been issued specifically to them by the RSL, and (b) unless they are entitled to wear the badge, at that time, under the rules of the League (e.g., a non-financial member is not permitted to wear the badge until their fees are paid).

The influence of the League comes from its founding days organising rituals for ANZAC Day dawn services and march, and Remembrance Day commemorations. However, even as early as the 1920s, the role of the League became controversial as it banned women from attending the dawn service because of their wailing. As well as arguing for veterans' benefits, it has entered other areas of political debate. It was politically conservative, Anglophilic, and monarchist.

Many veterans from the Vietnam War found the RSL, dominated by the ranks of World War II veterans, an unwelcoming, alien environment, and chose not to participate, but have over the past 20 years become actively involved. This may have been reflective of the changing status of Vietnam veterans in the 1970s and 80s. (See also Social attitudes and treatment of Vietnam veterans)

Nevertheless, the focus of the RSL is above all on the welfare of Australian men and women serving in the armed forces. It has advocated for veterans entitlements, the protection of former battlefields and the rights of serving soldiers, sailors and airmen. The RSL also ensures that those who have served the country are commemorated for their service by providing funeral information to those who have served with the deceased and handing out individual red poppy flowers at the funeral to ensure that the deceased service to their country is acknowledged (see In Flanders Fields). In 2003 Peter Phillips, the National President, endorsed a statement criticising the decision of the Howard government to send forces to Iraq without a mandate from a United Nations Security Council resolution. 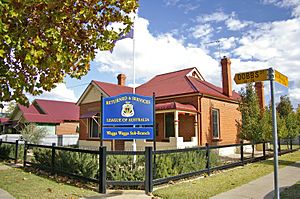 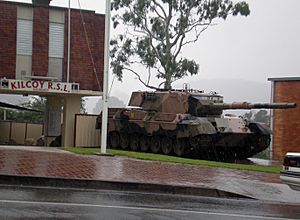 The National CEO has operational control of the National Office. In 2015 the redevelopment of the site of the Office on Constitution Avenue, Campbell, in Canberra commenced. A new building should be completed in 2019. In the interim, the National Office is in temporary accommodation at 7-9 Geelong Street, Fyshwick.

The naming of these Branches and Sub-branches should not be confused with the commercial entities, generally called RSL Clubs.

The Returned and Services League of Australia (Queensland Branch) is a branch of the RSL in Queensland. RSL Queensland assists all current and former members of the ADF, veterans, and their dependents, and also established the Eternal Flame Foundation for financial relief and to provide care for ex-service men and women, and their dependants, in necessitous circumstances.

All content from Kiddle encyclopedia articles (including the article images and facts) can be freely used under Attribution-ShareAlike license, unless stated otherwise. Cite this article:
Returned and Services League of Australia Facts for Kids. Kiddle Encyclopedia.