Goodna is a suburb on the eastern edge of the City of Ipswich in Queensland, Australia. In the 2016 census, Goodna had a population of 10,461 people. 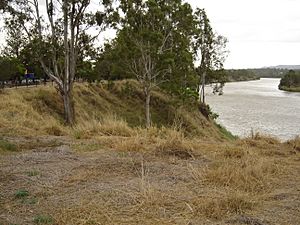 View of Brisbane River from Richardson Park in Goodna.

The Brisbane River runs to the north of Goodna. Goodna Boat Ramp is one of the only boat ramps on the Brisbane River and is part of the Brisbane River Canoe Trail. There are extensive old Jacaranda, Poinciana, Hoop Pine and Mango trees throughout the area. Parks are widespread with over 14 individual parks to be found and free electric barbecue facilities at the major ones. Names of some of the major parks include: Evan Marginson Sportsground, Richardson Park, Leslie Park, Kippen Park, Norma Mulvihill Park, Baines Meaney and Seymour Park. Fifty percent of The Pan Pacific Peace Gardens is also situated within Goodna. Wildlife is restricted with ongoing development, however possums and on a rare occasion koalas have also been spotted.

The Diggers Rest on the corner of Queen and Church Streets is the Goodna War Memorial. This was dedicated in September 1921. Many of the original central street names in Goodna originated from English kings, princes, and queens such as William, Albert, James and George. 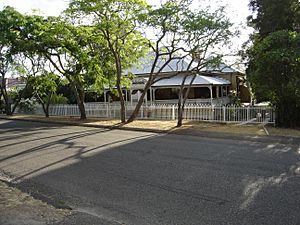 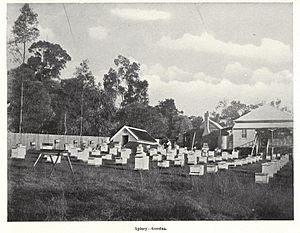 Historically Goodna was a farming community, primarily in sugar, cotton, livestock (sheep and cattle), and also had a large local timber industry. Large amounts of timber were taken by bullock teams to the Goodna wharf and shipped to Ipswich and Brisbane.

Woogaroo (as it was then known) had extensive beds of sandstone. In 1826 Patrick Logan established the Woogaroo Quarry to provide building materials for the Moreton Bay penal colony.

As early as 1841 there was a sheep run called Woogaroo Station, H.S.Russell and Dr. Stephen Simpson (the Grenier family of South Brisbane were still in New Zealand in 1841 and did not reach Brisbane till 1845 and while having the Grenier Inn at South Brisbane farmed land known as "The Willows" where Archerfield airfield stands today). This name, which referred to a waterhole in the creek was superseded from 1865 onwards by the name Goodna.

By the early 1840s Dr Stephen Simpson, the lands commissioner and magistrate for the Moreton Bay district, was living in a slab hut and farming on the riverbank near the mouth of Woogaroo Creek. As the main road intersected with the track from Coopers Plains and the river, at the time it was a strategic location for Simpson. In 1851–1852 he purchased 2,000 acres (8 km2) of land, including 640 acres (2.6 km2) on Wolston Creek. Other well known pioneers settled or purchased land in the Goodna area: James Holmes arrived in 1851 and established himself as a grazier; Charles Pitt married Thomas Grenier's daughter Mary in 1855 and grew cotton and maize at Redbank Plains. According to "Aldines" Charles was the second to grow cotton in that area and received 400 pounds from the Government of the day. He was also a JP and on the Purga Divisional Board and involved in the beginnings of the Redbank School. ; Harriet Holmes bought 33 acres (130,000 m2) in 1860; and Joshua Jeays, later Mayor of Brisbane, bought 40 acres (160,000 m2) in the next year. 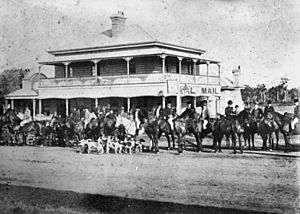 Further settlement took place after Goodna was proclaimed a village in 1856. In the following year Joseph and Ellen (née Thompson) Broad built a store on the site, and sold the store later to Edwin Pitt, son of Charles and Mary Pitt. Edwin and his wife Cecilia (née Thompson sister of Ellen Broad) ran the store as a mixed business and Cecilia was the postmistress (see Aldines). They survived the 1893 Brisbane flood but a little later built Pitt's Hotel Cecil on the store site. It was later burnt down and the RSL is now on that site. Edwin and Cecilia's daughter Zora Brenda Pitt grew up and learnt to ride in Goodna and she became Royal National Show champion woman rider in the early 1900s, and the cemetery opened in 1859. By 1863 there was a small run to Holmes Inn, where Harriet Holmes was postmistress.The Congregational Church which was also opened in 1863. It was built by Mr ES Thomas who was also the lay preacher. Mr Thomas was an Ipswich Councillor and the local JP. As a JP he also filled the role of acting magistrate on occasions. He built the now heritage listed house at 43 William Street and owned the adjacent general store and bakery. Mr Thomas originally operated a general store in Brisbane Road but this was flooded in 1983. They had to move their best things into the top floor of the nearby hotel. There was one acting police sergeant and a constable by 1868. W. Law established himself as a blacksmith in 1870, the year in which the Goodna State School opened.

On 30 January 1873 the ceremony of "turning the sod" for the first rail link between Ipswich and Brisbane took place at Goodna. Two thousand people attended the event, most arriving by paddle steamer. To officially start the work, the Queensland Governor George Phipps, 2nd Marquess of Normanby, used a solid silver spade to dig a small piece of earth and place it in a wheelbarrow. Cobb and Co coaches stopped at Goodna on their way to and from Brisbane (their only other stops were Oxley and Rocklea). This ended after the railway link was completed in 1875.

Daniel Jones built the first sawmill in 1884, which was located below the Catholic Church/School grounds in the paddock that reached from Mill Street to Alice Street (known by locals as 'the mill paddock'). In the smaller paddock immediately behind the Presbyterian Church and Manse stood the wooden 'Honey Shed' used by Daniel's brother Harry in conjunction with his apiary. By the Second World War this use had been discontinued and the site was used by a group of CWA ladies who made camouflage nets for the war effort. The site was also used at one time by the Goodna Scout Group.

By 1888 the population of Goodna was 500, and there were three friendly societies, the Oddfellows, Loyal Rose of Denmark and Good Templars. The foundation stone of St Francis Xavier Catholic Church (formerly St Patrick's) had been laid in 1880 by Bishop James Quinn and opened in the following year. The Catholic school was opened in 1910 and the Sisters of Mercy Convent in 1911. Goodna today retains significant elements of its heritage. 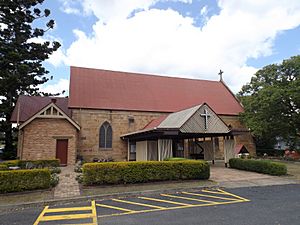 Goodna has a number of heritage-listed sites, including St Francis Xavier Church in Church Street. 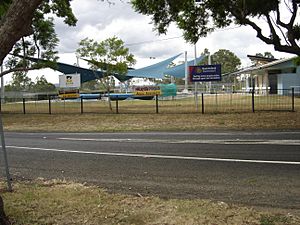 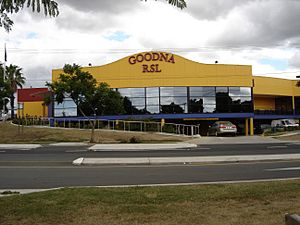 Goodna has a couple of gyms located within the commercial precinct which includes Just Fitness and Jetts. Goodna was the first Brisbane/Ipswich suburb to receive the NBN (National Broadband Network) providing fast broadband services. 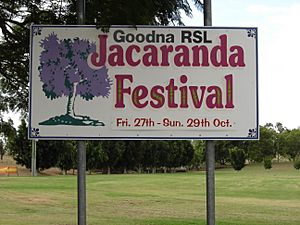 This is an integral part of the annual Ipswich Festival which is held each April. Attracting 1,000 riders it was started in 2002. It was initiated by Bernie Ripoll, the local federal member (Federal Member for Oxley) who has his office in Goodna. Goodna is the major rest point for this event and it is possible to join the event there. This event starts in the Brisbane Mall and finishes in the heart of Ipswich, covering more than 50 kilometres (31 mi) and passing through 27 western Brisbane and Ipswich suburbs. It raises funds for the Ipswich Hospital Foundation and the Royal Children's Hospital Foundation.

Goodna is also home to a campus of The Bremer Institute of TAFE.

All content from Kiddle encyclopedia articles (including the article images and facts) can be freely used under Attribution-ShareAlike license, unless stated otherwise. Cite this article:
Goodna, Queensland Facts for Kids. Kiddle Encyclopedia.