Moggill is a suburb in the City of Brisbane, Queensland, Australia. In the 2016 census, Moggill had a population of 4,641 people.

The Brisbane River and Moggill Creek were rich in resources and evidence of Aboriginal occupation includes Bora grounds near the Moggill Pony Club and O'Brien Road. Another Bora ring is located at the end of Riversleigh Road.

John Oxley the first European visitor, named it Termination Plains when he landed in the Priors Pocket area in 1823. In 1848 a profitable coal mine owned by John Williams commenced operation. In 1846 the first paddle steamer service from Brisbane to Ipswich began, travelling along the Brisbane and Bremer rivers past Moggill. At least eight steamers operated between 1846 and 1875, the trip taking four to seven hours. Previously a row boat operated by convicts would take around 12 hours from Brisbane to Ipswich and punts flowing with the tide would take several days. In 1849 The Moreton Bay Courier noted that land near "Moghill Creek" might be soon put up for sale, with settlers who arrived on The Fortitude given some assistance to help with a purchase. The first survey of Moggill was in 1851, with a township planned in the vicinity of Weekes Rd, however it was later established near the present school. A cemetery was established in 1865. The Moggill State School opened on 12 February 1866, with 53 students enrolled, and an average attendance of 31-24 boys and 13 girls. The school began as a two-room schoolhouse and remaining that way until 1970 when the population of the area started expanding rapidly.

In 1868 the Moggill Methodist Church was built at the corner of Moggill Road and Kangaroo Gully Road. Originally it was it had neither lining or ceiling, and had a shingle roof and cedar window frames. The church remains on the grounds of the Moggill Uniting Church. 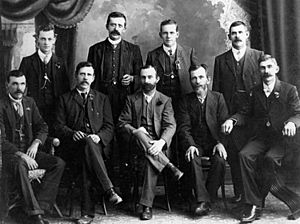 Men of the Anstead family, early settlers in the Moggill area.

In 1877 Moggill and the Moggill residents were described thus in The Queensland Times newspaper:

"The Moggill farmers are a well-to-do class, not with standing the fact that their holdings are comparatively small, and they are dependent entirely on agricultural pursuits, there being no outside country to be made use of for the running of cattle. The land is, for the most part, composed of rich alluvial deposits, and its quality is such that it is very hard to exhaust it. There are parts of the district where the soil is patchy, and there are places where it is rather difficult to cultivate, but these disadvantages are more than counterbalanced by the richness of the remaining portions, from which crops of more than average yield are taken each successive season."

The Moggill punt (ferry) was important as a means of transport across the Brisbane River. In 1884 the ferry sank and was eventually replaced with a hand pulled, rope guided ferry.

In 1886 Colledge Brothers, a contracting firm, secured a 10 year lease with the option of a further 10 year extension from Thomas Sugars to open the Moggill Blue Metal Quarry, four miles above the Bremer River, employing 20 men. in 1924 the Moggill Quarry was purchased by the Gravel, Sand and Metal Supply Ltd. for ₤4500. Mr J Anstead became the works manager.

In 1973 Moggill was divided into three suburbs, the other two were named Anstead and Bellbowrie. The name of the creek is derived from 'Magil', from Yuggera (Jagera) Nation language meaning water dragon. 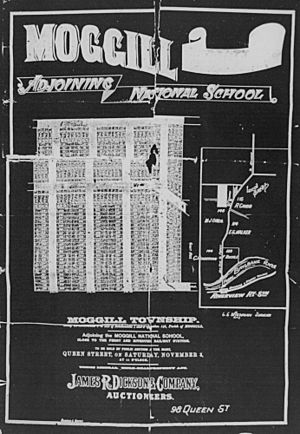 After 2004, the traditional Moggill pineapple farms, situated on the rich red clay soils around Witty Road and Priors Pocket Road, began to be subdivided for housing. There was vocal opposition to the subdivision from Moggill residents, who wished to preserve the rural amenity of the area with larger block sizes. In spite of this, the average block size of the new estates is around 700 m².

Moggill has been administered by six local government entities:

Moggill Historical Society was formed in 2013 to research, preserve and promote the history and heritage of the Moggill district including the Brisbane suburbs of Anstead, Bellbowrie, Pullenvale and Pinjarra Hills.

There is a Mogill branch of the Country Women's Association which meets on the third Thursday of the month at 9.30am at the Bellbowrie Community Church, 3077 Moggill Road.

The District Sports Park is planned for multiple uses with the layout changing depending on the sport seasons.

In 2010, a cricket oval was constructed on the corner of Moggill and Priors Pocket Roads as part of a residential housing subdivision known as The Pitch.

Only one park within Moggill has facilities including a playground, barbecue & shelter but no toilets: Moggill Ferry Reserve, Moggill Road, next to Moggill Ferry.

Other parks within Moggill are:

No parks within Moggill have toilet facilities, the two closest Brisbane City Council parks that do are located at: Booker Place Park, Birkin Road, Bellbowrie and on the intersection of Hawkesbury & Mt Crosby Roads, Anstead.

The majority of land that sits between the adjoining Brisbane River and private properties is classified as Park Land (PK) by Brisbane City Council.

There is no secondary school in Moggill. The nearest government secondary school is Kenmore State High School, located at Aberfeldy Street, Kenmore, which offers secondary education between Grades 7 to 12, contains Moggill within its catchment area. 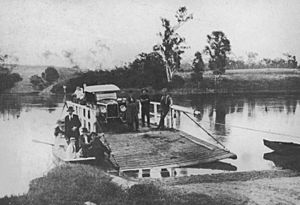 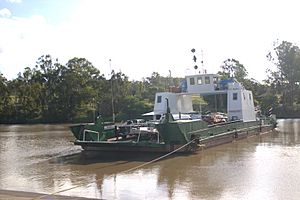 Moggill Ferry, a tolled vehicular cable ferry, crosses the Brisbane River between Moggill Road, Moggill, and Moggill Ferry Road, Riverview (27°35′41″S 152°51′24″E﻿ / ﻿27.5947°S 152.8566°E﻿ / -27.5947; 152.8566﻿ (Moggill Ferry)). The ferry was motorised in the 1940s under the joint control of the Ipswich and Brisbane City Councils. As of 2010, the service is provided by Stradbroke Ferries Ltd. The communities on either side of the Brisbane River have for a long time been divided on the topic of replacing the ferry service with a bridge. Those opposed to a bridge say: the ferry is historical; the rural lifestyle on the north side of the river will be replaced with urban sprawl; Moggill Road already suffers from congestion; and the cost would be too great. Those in favour of a bridge say : there is a lack of alternative convenient river crossings (nearest are Colleges Crossing and Jindalee); the ferry does not operate at night; sporadic halts to service occur due to mechanical breakdowns; and severe weather causes dangerous river debris and strong river currents. The ferry is free for pedestrians and bicycles.

During the 2011 Brisbane River flood, the service was suspended and the ferry secured on the western bank. On 12 January 2011, when the river reached the peak of 18 metres its force broke one of its 2 cables. An assessment was made as to whether to sink, demolish or secure the ferry to prevent it becoming a 'missile' downstream if it came free. A decision was made to further secure it with a 1.5 tonne anchor, which was flown in by helicopter.

Utilising Moggill Road, State Route 33, Brisbane via Toowong, Indooroopilly and Bellbowrie to Riverview, bisects Moggill. It has both a single and dual carriageway within Moggill.

An alternative location for a bridge to replace Moggill Ferry is proposed within the Moggill Pocket Arterial Road Transport Corridor. Land has been set aside by the Queensland government as a future transport corridor passing through the suburbs of Kenmore, Pullenvale, Anstead and Karalee to connect the Centenary Highway at Fig Tree Pocket with the Warrego Highway at North Tivoli.

On 15 February 2011, the Brisbane Times reported that the Queensland government were re-evaluating the possibility of constructing a bridge over the Brisbane River.

There is no bus service to both Ipswich CBD, a major commercial and industrial area approximately 12 kilometres (7.5 mi) away, and the City of Ipswich Local Government Area which is on the other side of the Brisbane River.

The Council Cab and Karana Downs Personalised Public Transport (PPT) services are provided by Brisbane City Council. The Council Cab is offered to a pre-defined list of residents who find it difficult to get to their local shops. The Karana Downs PPT services areas where TransLink services are restricted with Black and White Cabs providing wheelchair accessible and air conditioned maxi-cabs. The Karana Downs PPT is a hail and ride service with a fixed route, within Moggill it is along Kangaroo Gully and Moggill Roads (including Moggill State School).

All content from Kiddle encyclopedia articles (including the article images and facts) can be freely used under Attribution-ShareAlike license, unless stated otherwise. Cite this article:
Moggill, Queensland Facts for Kids. Kiddle Encyclopedia.