The 2010–11 Queensland floods were a series of floods in Australia which began in December 2010 and ended in January 2011. The majority of the floods were in Queensland including its capital city, Brisbane. The rain also caused floods further south in central and western Victoria. at lest 90 towns flooded. A huge area of Queensland, the size of Texas and France combined, was flooded. The floods forced thousands of people to leave their homes. At least 70 towns In Queensland and over 200,000 people were affected. Three-quarters of the state of Queensland has been declared a disaster zone. The 2010–2011 floods have killed 35 (not 30) people across Queensland since November and 14 are still missing. More than 20 people have died in flash floods between Brisbane and Toowoomba. 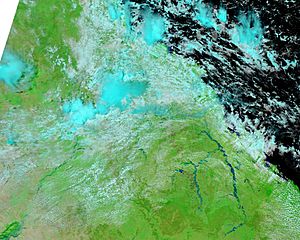 The floods were caused by heavy rain from tropical cyclone "Tasha" that joined with a trough during a La Niña event. La Niña is an unusual weather pattern, which brings wet weather to eastern Australia. The 2010 La Niña was the strongest since 1973. This caused heavy rainfall across Queensland. December 2010 was the wettest on record, with 107 places getting their highest rainfalls ever. The state average rainfall level of 404.7mm was much bigger the old record of 369mm set in 1975. 2010 was also recorded as the state's wettest spring since 1900 and the Australia's third wettest year. Flooding started across parts of the state in early December. On 28 December a monsoonal trough crossed the coast from the Coral Sea, bringing very heavy rain from the Gulf of Carpentaria to the Gold Coast.

About 300 roads were closed, including nine major highways. Many places, including Condamine and Chinchilla were flooded several times. Coal railway lines were closed and many mine sites flooded. The floods have caused fruit and vegetable prices to rise as crops have been destroyed. The wet conditions have also led to a large number of snakes seeking safety on the higher ground or in houses with people. Saltwater crocodiles and sharks were seen in some flooded areas of towns.

Flooding in the Fitzroy River

The flooding forced 8,000 people to leave Theodore and other towns. The military transported people by helicopter to an evacuation centre at Moura. The total evacuation of a Queensland town had never happened before.

Emerald was cut-off by road on 29 December as the Nogoa River rose. The next day, the river level rose above the 2008 flood peak level of 15.36 metres (50.4 ft). At the peak of the flooding, 80% of the town was flooded, the worst the town ever experienced. 1,200 people from Emerald were listed as evacuees.

Rockhampton had nearly a week to get ready for the flood peak from the Fitzroy River, which flows through the centre of the city. The airport was closed on 1 January. A metal flood barrier was set up to protect the buildings. An evacuation centre was set up at the Central Queensland University. The Bruce Highway leading south out of Rockhampton was closed to traffic. The river reached 9.2 metres (30 ft) just short the of the predicted 9.4 metres (31 ft) maximum.

The Port of Gladstone cut back its coal exports because the coal piles at the port were too wet and further coal deliveries could not be made by rail. The Goonyella railway line which is used by a number of coal mines in the Bowen Basin was closed for one week and shipments of grain were also stopped. 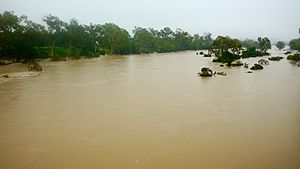 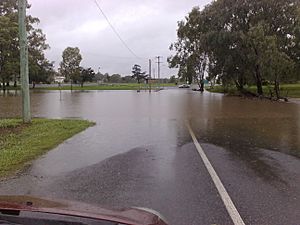 A flooded street in Warwick

The towns of Gayndah and Mundubbera when the Burnett River flooded on 28–29 December. The river peaked at 18.25 metres (59.9 ft) at Mundubbera. This was the highest river height since 1942 and flooded more than 20 houses. Downstream at Gayndah, the river peaked at 16.1 metres (53 ft) with floodwaters reaching two houses. Both towns were isolated for several days and there was major disruption to the drinking water supply and local agricultural production.

Bundaberg had its worst flooding in 40 years, after the Burnett River flooded the city. Floodwater forced 300 households to leave their homes .

Chinchilla and Jericho were also flooded. At least 40 people were evacuated from Chinchilla.

Flooding in Dalby was the worst since 1981. The town's water purification system was flooded, resulting in water restrictions that have not helped clean-up efforts. 112500 litres of water were transported to the town of 14,000 residents. Warwick was isolated when all roads into the town were cut-off.

The Macintyre River, which forms part of the border between the Australian states of New South Wales and Queensland, began to threaten the town of Goondiwindi on 13 January. The town is protected by a 11 metres (36 ft) levee, but the local hospital and aged care home have been evacuated and an evacuation centre established.

Toowoomba and the Lockyer Valley

The city of Toowoomba, in the Darling Downs, was hit by flash flooding after more than 160 millimetres (6.3 in) of rain fell in 36 hours to 10 January 2011. This event caused four deaths in a matter of hours. Toowoomba is located on the Great Dividing Range, some 700 metres (2,300 ft) above sea level. A three-week period where it had rained on all but three days had left the soil around Toowoomba very wet. When a line of storms hit the city on 10 January, the heavy rain rapidly ran off down gullies and streets. The central business district of the city sits in a small valley where East Creek and West Creek meet to form Gowrie Creek. With so much water the creeks burst their banks, pushing a devastating wall of water through the city centre.

Nearby Gatton saw people leave their homes as the Lockyer Creek rose to a record height of 18.92 metres (62.1 ft), higher than the previous record set in the 1893 Queensland floods. The flood passed through the Lockyer Valley town of Withcott, where the force of the water pushed cars into shops and forcing the evacuation of hundreds of people. The scene was described by an onlooker as "like Cyclone Tracy has gone through it ... If you dropped an atom bomb on it, you couldn't tell the difference." Grantham was also hit hard by the flooding rains. Houses were left crumpled by what Premier of Queensland Anna Bligh described as an "inland tsunami". According to local media, the flood waters had reached a height of 7 or 8 m (23 or 26 ft) by the time it struck Grantham. Nine people died, and 66 reported missing. The body of one victim washed away at Grantham was found 80 kilometres (50 mi) downstream. The Queensland Police Commissioner Bob Atkinson warned that some bodies may never be found. 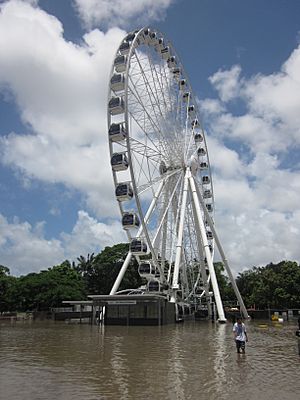 Wheel of Brisbane during the floods

On 11 January 2011 at around 2:30 pm EST, the Brisbane River broke its banks leading to evacuations in the Brisbane CBD and the suburbs of Fortitude Valley and West End. An evacuation centre was set up at the RNA Showgrounds in Bowen Hills. According to media, people living in 2100 Brisbane streets had been told to leave before the arrival of floods, which struck the city on 12 January. Brisbane Mayor Campbell Newman stated than about 20,000 homes would be affected when the river peaks on 14 January Newman also stated that the Brisbane River transport system had been "substantially destroyed".

On 13 January the Brisbane River did not reach anticipated heights but still 20,000 houses in Brisbane were flooded. Some of the Brisbane neighbourhoods worst affected by the floods include St Lucia, West End, Rocklea and Graceville. The floods have damaged some of Brisbane's icons. The Brisbane Riverwalk—a floating walkway over the Brisbane River linking the inner city neighbourhoods of Fortitude Valley and New Farm broke up. One section formed a 300 metres (980 ft) "floating missile" that threatened the Sir Leo Hielscher Bridges. The largest part of the floating boardwalk was safely guided under the bridge by a tugboat and past other infrastructure before being safely secured. Brisbane's major Association football and Rugby league venue, Suncorp Stadium filled with water up to 2 metres (6.6 ft) deep, reaching the third or fourth row of seats.

With the flood peaking at 4.46 m in Brisbane, the floods were the sixth highest in the city's history. Parts of the western suburbs of Brisbane were cut off for three days. People in suburbs including Bellbowrie, Moggill and Pullenvale were running low on food and other items when Moggill Road was cut until the Australian Army was able to reach the area on 15 January with much needed supplies. 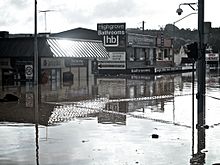 The Bremer River at Ipswich—30 kilometres (19 mi) west of Brisbane—reached a height of 19.4 metres (64 ft) on 12 January, flooding the central business district and at least 3,000 houses. One third of the city was said to be underwater and over 1100 people had taken shelter at evacuation centres. At nearby Marburg, a 4-year-old boy was swept away by floodwaters when he fell from a rescue boat. A man in his 50s died when he accidentally drove into floodwaters in the Ipswich suburb of Wulkuraka. The worst affected areas of Ipswich were the suburbs of Goodna and Gailes.

In South East Queensland, the Wivenhoe Dam filled to a level equivalent to 191% of its supply capacity on 11 January 2011. Brisbane experienced its wettest December since 1859. Wyaralong Dam, near Beaudesert, had recently been completed and is receiving praise for reducing flooding in downstream Logan, having exceeded 80% of its capacity.

In North Queensland, the town of Ingham became isolated as the Herbert River peaked. Homes at Babinda, and Gordonvale were flooded.

As of 14 January 2011, the floods have led to 30 deaths, 15 of which are from the Toowoomba and the Lockyer Valley area. Another 14 people are listed as missing, after the flash flood struck Toowoomba, Lockyer Valley, Brisbane and Ipswich.

The first death was reported on 20 November 2010, when a woman drowned in her vehicle near Dysart. In the following weeks, five others also drowned in their cars.

Nine people drowned after being caught directly by the flowing waters. and thirteen people died in other circumstances.

The following list shows how, where, and when many of the deaths happened.

All content from Kiddle encyclopedia articles (including the article images and facts) can be freely used under Attribution-ShareAlike license, unless stated otherwise. Cite this article:
2010–2011 Queensland floods Facts for Kids. Kiddle Encyclopedia.