Beaudesert is a rural town and locality in the Scenic Rim Region, Queensland, Australia. In the 2016 census, Beaudesert had a population of 6,395 people.

Beaudesert is the administrative centre for the Scenic Rim Region.

Beaudesert is located on the Mount Lindesay Highway, some 91 kilometres (57 mi) south of Brisbane. The area sources its income predominantly from rural activities such as cropping, grazing and equine activities, as well as tourism. It has a racecourse, 50-metre swimming pool, public library, two gyms and mountain scenery. 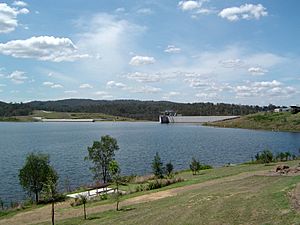 In the Logan River and Albert River valleys, Beaudesert is a regional hub serving surrounding communities such as Rathdowney, Kooralbyn, Canungra, Tamborine Mountain and Jimboomba. It is approximately 91 kilometres from Brisbane and connected by the Mount Lindesay Highway.

The town of Beaudesert is located 46 m above sea level and has an average annual rainfall of around 916 mm per year. The temperature is around 30 degrees in summer and falls to around three degrees in winter. Generally the weather is mild, but some severe storms can arrive each summer.

In the east of the locality is the decommissioned Nindooinbah Dam. The much larger Wyaralong Dam is situated roughly 14 km to the north west of the town and was completed in 2011. 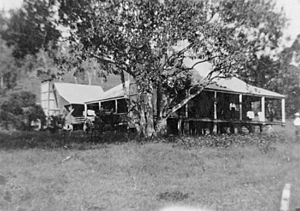 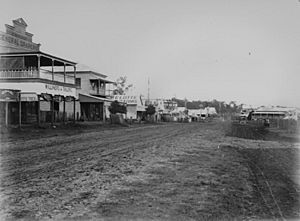 The town was settled in 1847 and has grown to a small, bustling centre.

The town is possibly named after Beau Desert Park, the property of Charles Henry Alexander Paget, 6th Marquess of Anglesey in Staffordshire, England. Yet it is certain that Queensland's Beaudesert was named in about 1841 or 1842 by 'Ned Hawkins', or Edward Brace Hawkins (1821–1849), who was claiming the area as a sheep station on behalf of his employer William Henry Suttor senior (1805–1877) at Bathurst. It is not known why Hawkins picked the name Beaudesert. He was himself born in Newark Upon Trent in Nottinghamshire, the son of Thomas Fitzherbert Hawkins and wife Elizabeth of Bathurst fame, and it does not seem that he or his family had any personal connections to Beaudesert in England. Ned Hawkins moved on, not long after taking up Beaudesert station, to take up Boonara Station in the South Burnett. 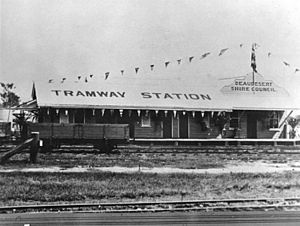 The town was originally set out in a grid pattern; however, several of the streets followed cart tracks. The area was originally settled for growing cotton and sheep. However, the area is also notoriously short of water and the cotton was not a successful crop. Hoop pine was very successfully collected from the area. In 1863 the cotton workers were indentured labourers from the South Sea Islands, the first such use in Queensland. In the 1880s, the Cobb and Co coaches ran between Beaudesert and Jimboomba. In 1885, the Beaudesert railway line was being pegged out and the railway was opened in 1888. Timber, cattle and dairying were the main industries in the area.

From the nineteenth century through to the 1980s, it was a thriving centre with a shoe factory and meat works as well as markets, a hospital and an ambulance service. The Enright family managed a major department store. The Blunck family managed an electrical store and a car servicing and sales business. As in many areas, globalisation has seen local factories and family-owned business taken over and closed with profits leaving the town where once they would have been reinvested.

Even though the area was known as Beau-desert (beautiful desert), the droughts and the floods were continuous problems in the area. In times of flood, houses, animals and people were washed away. The damage caused by floods is often recounted in historical documentation.

The Biddaddaba History Group brought together the history of the area from the earliest settlement of white people up to 1990 in a comprehensive book available from libraries.

Located in the Beaudesert Historical Museum is the Milbanks Pioneer Cottage. This cottage was originally built in 1875 by Patrick Milbanks on his Kerry property, out of local hand hewn timbers, slats and shingle roof. It has four-poster bed, large cedar sideboard and numerous articles that portray the life of the early pioneers. It was donated to the museum by Patrick Milbanks's grandchildren and relocated to its present site in 1979. 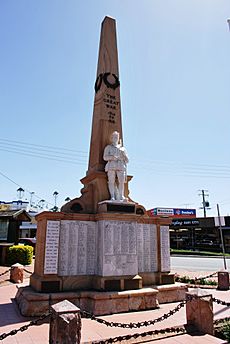 The Beaudesert War Museum was unveiled on 28 September 1921 by Queensland Governor Matthew Nathan.

Beaudesert has a number of heritage-listed sites, including:

Bromelton SDA was declared in 2008, and covers 15,000 hectares of land approximately six kilometres west of Beaudesert. About 1,800 hectares has been earmarked for industrial development. It will accommodate industrial activities of regional, state and national significance, maximising the use of the areas existing standard gauge rail. The railline connects Bromelton to the Port of Brisbane, to other parts of Queensland, and to other States.

Mirvac has commenced work on a site bordered by Sandy Creek Road and Beaudesert Boonah Road. The Bromelton SDA applications will be reviewed by the Co-ordinator General for approval. The Scenic Rim Regional Council will be responsible for operational works, clearing of vegetation, plumbing and Reconfiguration of Lots (ROLs) applications after the MCUs have been approved by the State Government.

A bus runs from Beaudesert to Browns Plains and Brisbane on weekdays. Centacare St Mary's Community Services and the Beaudesert RSL provide transport for aged, disabled, veterans and hospital/respite requirements.

A branch railway line ran from the outer Brisbane suburb of Bethania to Beaudesert and was in regular use from 1886 to 1996. Until 1991 it had served the meat-packing plant on the outskirts of the town.

A petition from railway enthusiasts, and considerable grants of government money, resulted in its re-opening in 1999. Beaudesert Rail operated steam-driven tourist trains on the line for a short while thereafter. The company ceased operating in August 2004 after a series of fires, allegedly lit by sparks from the train, were set along the train line. The company was in debt and has ceased to exist, with the rolling stock liquidated and physical infrastructure demolished. Beaudesert Rail had also been trading while insolvent, resulting in the closure of several local business who had extended them credit.

The Arts Centre hosts a number of community groups and there is a wide range of community activity including a very active Bush Bards group.

A number of well-known sporting teams represent the local area, including the Beaudesert Kingfishers who play home games at R.S. Willis Park.

All content from Kiddle encyclopedia articles (including the article images and facts) can be freely used under Attribution-ShareAlike license, unless stated otherwise. Cite this article:
Beaudesert, Queensland Facts for Kids. Kiddle Encyclopedia.