Rathdowney (historically also written as Rathdownie) is a rural town and locality in the Scenic Rim Region, Queensland, Australia. In the 2016 census, Rathdowney had a population of 308 people. 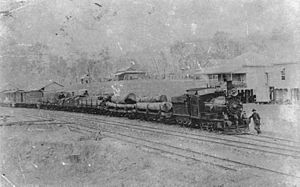 The town was named after the former Rathdowney station, which derived its name from Rathdowney in Ireland. The Beaudesert Shire Tramway was extended to Rathdowney in 1911 but closed in 1944. Timber clearing was the first major industry in the area. Cattle grazing and dairy farming are now the main industries.

Rathdowney has the following heritage-listed sites:

The eastern boundary is marked by the Logan River. It is also close to some of the areas of greatest biodiversity in Australia, and a gateway to various National Parks such as Border Ranges National Park and Mount Barney National Park with a variety of lush rainforest, eucalypt forest, mountain heath and other habitats. In the west, where Burnetts Creek enters the Logan is Bigriggen Reserve Park. The park provides camp sites with a kiosk by the river with access available to caravans, motorhomes and buses.

There are many tours, farm stays, guest houses and other opportunities available for visitors to experience this region, which is about a 90-minute drive from Brisbane or the Gold Coast. In Autumn every year the population rises by several thousand for one day at the Rathdowney Heritage Festival, organised by the Rathdowney and District Historical Association (RADHA), who also run an information centre with information on natural heritage, indigenous heritage and history of white settlement from the time of the first pioneers to present day.

Currently the small town has a police station, a small shop, a pub, a service station, a post office, memorial grounds, information centre, a bowls club and a small school. The Rathdowney Primary School opened in 1912 and has a 25 m swimming pool in which every spring and summer the swimming club has races on a Friday night. The swimming club also has swimming training during the week after school.

All content from Kiddle encyclopedia articles (including the article images and facts) can be freely used under Attribution-ShareAlike license, unless stated otherwise. Cite this article:
Rathdowney, Queensland Facts for Kids. Kiddle Encyclopedia.