Innisplain is a rural locality in the Scenic Rim Region, Queensland, Australia. In the 2016 census, Innisplain had a population of 85 people. 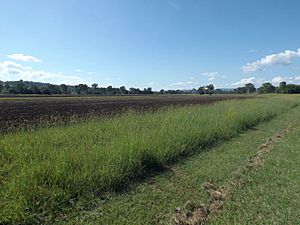 Part of the Logan River and the Mount Lindesay Highway marks the western boundary. The area is hilly with some land used for agriculture. The Sydney–Brisbane rail corridor passes through the area.

A railway station on the Beaudesert Shire Tramway was located at Innisplain, opening in 1903. A state school operated from 1921 to 1962.

All content from Kiddle encyclopedia articles (including the article images and facts) can be freely used under Attribution-ShareAlike license, unless stated otherwise. Cite this article:
Innisplain, Queensland Facts for Kids. Kiddle Encyclopedia.