Tamrookum is a small rural locality in the Scenic Rim Region, Queensland, Australia. In the 2011 census, Tamrookum and surrounds had a population of 266 people.

The Mount Lindesay Highway traverses Tamrookum from north to south and forms part of the north west boundary. The eastern boundary is marked by the Logan River. A series of small, vegetated hills in the west rises to elevations of up to 140 m. In the east adjacent to the river the predominate land use is agriculture. 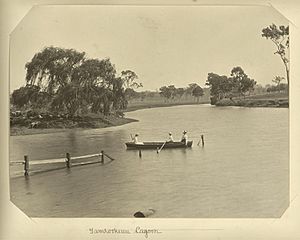 The name Tamrookum is believed to be a corruption of the Aboriginal words dhan/buragun meaning place of boomerangs. 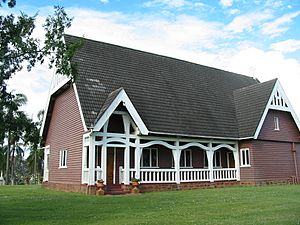 Tamrookum has a number of heritage-listed sites, including:

All content from Kiddle encyclopedia articles (including the article images and facts) can be freely used under Attribution-ShareAlike license, unless stated otherwise. Cite this article:
Tamrookum, Queensland Facts for Kids. Kiddle Encyclopedia.