Laravale is a locality in the Scenic Rim Region of South East Queensland, Australia. At the 2011 Australian Census Laravale and the neighbouring locality of Tamrookum recorded a combined population total of 266. 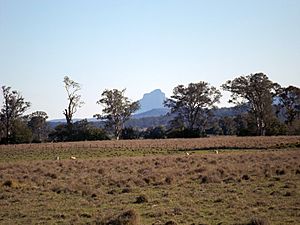 Part of the southern border is marked by the Widgee Creek, the Logan River and the Mount Lindesay Highway. The Sydney–Brisbane rail corridor also passes through the locality. In the east the northern extent of the Jinbroken Range elevates the terrain to heights greater than 350 m above sea level. Agriculture, including dairying, has developed in the more fertile areas adjacent to the Logan River.

All content from Kiddle encyclopedia articles (including the article images and facts) can be freely used under Attribution-ShareAlike license, unless stated otherwise. Cite this article:
Laravale, Queensland Facts for Kids. Kiddle Encyclopedia.