Mount Lindesay is a mountain and locality within the Scenic Rim Region, Queensland, Australia.

The mountain lies on the Queensland-New South Wales border, approximately 140 km south west of Brisbane, Australia. It is one of a number of peaks in the McPherson Range, and is remarkable for its tiered summit, the eroded remnant of lava flows from the nearby Focal Peak shield volcano. Mount Lindesay is situated within the Mount Barney National Park in Queensland and the Border Ranges National Park in New South Wales. Apart from the northern slopes, the rest of the peak is covered in dense rainforest, and the summit is frequently in cloud and mist. The Mount Lindesay Highway passes to the western side of Mount Lindesay. 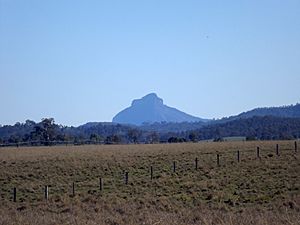 On 6 July 1828, the botanist and explorer Allan Cunningham originally named this mountain Mount Hooker after botanist William Hooker and called another mountain (now Mount Barney) by the name Mount Lindesay after Colonel Patrick Lindesay, the Commandant of Troops in New South Wales 1827-1836. Later, the New South Wales Surveyor-General Thomas Mitchell is believed to have changed the names to be Mount Lindesay and Mount Barney (after Lieutenant-Colonel George Barney) respectively.

The first recorded ascent of Mount Lindesay by Europeans was made in May 1872, by Thomas de Montmorency Murray-Prior (1848-1902) and Phillip Walter Pears (1846-1924). At the time of the 1872 ascent, an Aboriginal elder at nearby Unumgar station informed Pears that his father had once climbed the peak, which suggests that Aboriginal people have made occasional ascents of Mount Lindesay for thousands of years.

The second recorded ascent of Mount Lindesay by Europeans was made in July 1890, by the Norwegian naturalist and explorer Carsten Egeberg Borchgrevink (1864-1934), then working in the district as a surveyor's labourer, and Edwin Villiers-Brown, of Beaudesert. There were a further eight recorded ascents by the late 1920s, when pioneering climbers such as Bert Salmon (1899-1982) started visiting the peak regularly. The first women to climb Mount Lindesay were Brisbane climbers Jean Easton and Nora Dimes, who made the ascent with Bert Salmon in March 1931.

In December 1928 Mount Lindesay was the site of the first known recreational climbing fatality in Australia, when Lyle Vidler fell to his death whilst attempting a solo ascent of Vidler's Chimney. He is buried in a grave in the rainforest, not far from where he fell. On 19 June 2011, Ross Miller, one of a party of six, fell to his death while climbing in a designated area. 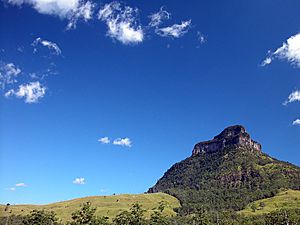 Mount Lindesay has been part of a successful native title claim made by the Trevor Close on behalf of the Githabul people, for whom the peak holds a special significance.

Despite appearances, Mount Lindesay offers few opportunities for rock-climbers, due to the unsound nature of the rock (decaying rhyolite). There is one steep and exposed scrambling route to the summit, rated at approximately grade 6-7, which starts at the south east corner of the upper cliffs. However, this is not a bushwalking route as such, and anyone making an ascent should have basic rock-climbing and abseiling skills, or be under the guidance of experienced rock-climbers.

All content from Kiddle encyclopedia articles (including the article images and facts) can be freely used under Attribution-ShareAlike license, unless stated otherwise. Cite this article:
Mount Lindesay (Queensland) Facts for Kids. Kiddle Encyclopedia.