Josephville is a locality in the Scenic Rim Region of South East Queensland, Australia. At the 2011 Australian Census Josephville and surrounding localities recorded a combined population total of 201. The main land use in the area is agriculture. 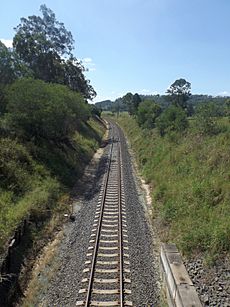 Part of the northern border is marked by the Logan River and its tributary Sandy Creek. A section of the border in the south also follows the Logan River. In the west the land rises to elevations above 500 m above sea level. Both the Mount Lindesay Highway and the Sydney–Brisbane rail corridor pass through Josephville.

All content from Kiddle encyclopedia articles (including the article images and facts) can be freely used under Attribution-ShareAlike license, unless stated otherwise. Cite this article:
Josephville, Queensland Facts for Kids. Kiddle Encyclopedia.