Bromelton is a rural locality in the local government area of Scenic Rim Region in southern Queensland, Australia. At the 2011 census, Bromelton and the surrounding area had a population of 307. 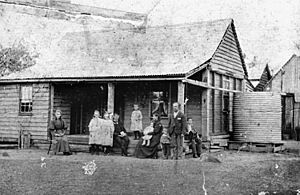 The town has a crossing loop on the Sydney to Brisbane standard gauge line. Bromelton station was served by a northbound XPT service to Roma Street and a southbound service to Sydney until it closed in 1994.

In 2016 SCT Logistics commenced building a transport hub. It will open in January 2017. The Australian Rail Track Corporation has also purchased land in Bromleton.

All content from Kiddle encyclopedia articles (including the article images and facts) can be freely used under Attribution-ShareAlike license, unless stated otherwise. Cite this article:
Bromelton, Queensland Facts for Kids. Kiddle Encyclopedia.